This year the red tide just won't go away.

Floridians along the west coast from Tampa to Naples are praying to God for the siege to end.

The naturally occurring microscopic alga commonly known as red tide (but more formally as Karenia brevis) has been documented along Florida’s Gulf Coast since the 1840’s. It occurs nearly every year. But this year its concentrations are higher and consequences more dire than most Gulf Coasters can ever remember.

And it's been going on since November.

"We just want answers," Bunny Elliott, a frustrated Englewood resident, told Sunshine State News Wednesday. "We need to know there's an end in sight and we're all willing to help. Just tell us how."

Scientists are agreed about one thing: Blooms of Florida red tide typically begin 10-40 miles offshore, away from coastal sources of natural and human-contributed nutrients, then are transported inshore by winds and currents. I wrote about this in a SSN story in 2016.

“For various reasons, the conditions all come together that make red tide move from offshore to inshore,” said Quay Dortch, a program manager for the National Oceanic and Atmospheric Administration who studies harmful algal blooms. “Some years, it’s sort of a minor problem and some years -- like this year -- it’s a major problem.”

He said there's no telling how long this occurrence will last, but because we're now in the time of year the tide usually starts, it's probably going to be around a while longer. 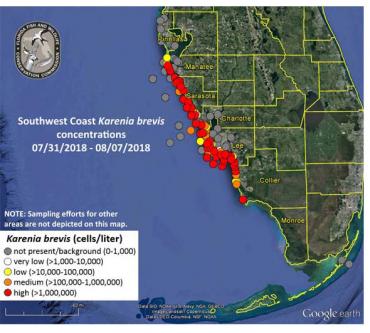 Dortch told USA Today research hasn’t yet found a definitive link between the severity of red tides and climate change, but scientists are looking. “Whether climate change will make these more frequent is something we just don’t know right now,” he said.

In fact, lots is happening this year -- not all of it bad. More study, more research, for example. According to an information sheet from Mote Marine Laboratory a Sarasota-based independent research institution that has studied Florida red tide for decades in cooperation with the Florida Fish and Wildlife Conservation Commission and numerous other partners, there's nothing simple about red tide. Lab data show "... K. brevis can use at least 12 sources of nitrogen and phosphorus nutrients, making bloom dynamics extremely complex and challenging to sort out."

But the chances of nutrients worsening red tide blooms when carried to sea from the Caloosahatchee River, or from any riverine flow are unlikely, says Mote. The estuary water has low salinity -- less salt than the Gulf -- and low salinity is not conducive to Karenia brevis red tide growth.

Still, Mote rules nothing out and calls it "an important topic that needs further research."

As it happens, Mote Marine Laboratory is in the right place at the right time now and with partner Florida Fish and Wildlife Conservation Commission (FWC), has accelerated its work to find the answers long-suffering residents are looking for.

From October 2017 through July 2018, Mote and its partners have monitored extensively for Florida red tide designed to augment public information on the status of the bloom.

"Communities affected by the current Florida red tide are asking great questions," Mote officials say, "in particular, what more can be done to address this challenging harmful algal bloom (HAB) and better protect public health and quality of life?"

On Friday a Web seminar -- a video chat -- from 3 p.m. to 4 p.m. will be open to the first 1,000 people who sign up. Mote scientists will attempt to answer pressing questions and talk about the multiple scientific studies moving forward this summer. The chat will be through the Zoom platform.

After the live Web chat, the video itself will be available on Mote's YouTube page: Click here.

Participants for the event are --

Click here for information on how you can take part in this red tide Web seminar.

Said Stacy Alexander, assistant vice president for community relations and communications for Mote, "There's also a critical need for much more science and technology investment to develop approaches for controlling and mitigating the impacts of red tides and other harmful algal blooms (HABs) when they do occur. Rapid environmental response methods and strategies that focus on reducing or eliminating the algae and/or their toxins, as well as restoring devastated fish stocks is urgently needed."

Mote has a long and

Permalink Submitted by Marine Doc on August 11, 2018 - 9:23pm
Mote has a long and continuing history of trying to scam supporters, donors, agencies, and elected officials with the purpose of obtaining more $$$. Mote has been saying that they are working toward solving red tide for almost 4 decades -- during which time Mote has obtained and spent over ten million dollars -- to almost no avail. Similarly, Mote has used the same modus operandi (falsely promising big solutions, but never coming through with anything meaningful) by promising to cure cancer by studying sharks (another 4 decades with no results). They continue to try to suck funding from donors by falsely promising to increase fish and shellfish abundance by growing them in tanks and stocking them (but in pathetically small numbers that do not survive or contribute). Now they are promoting saving coral reefs from global climate change by growing corals in tanks and placing them on reefs -- a very unlikely, yet lucrative sales pitch. For decades Mote has discouraged its scientists from discussing the scientifically obvious role of population growth, coastal habitat destruction, and nutrient pollution on increases in severity and size of red tide outbreaks -- because its Board of Trustees have big financial ties to and interests in real estate development and associated business. Good basic, unbiased and continuing research on red tide is warranted. However, it should not be a continuation of the false Mote promises. Instead it should be funded based on the best science and ideas -- competitive, peer-reviewed grant proposals -- and not continued political pork-barrel funding to Mote through politicians like Vern Buchanan who direct pork to Mote because Vern thinks it looks politically good, yet all the while over decades refusing to address the issues of over-development and coastal habitat destruction and nutrient pollution.

Permalink Submitted by Joel on August 13, 2018 - 7:26pm
Like the Everglades Foundation hasn't wasted millions on its scientists who have given us NOTHING but a propaganda campaign to serve Paul Tudor Jones? Show my their science for all the money they have taken in before you skewer Mote.

Permalink Submitted by Tru FL Cracker on August 9, 2018 - 4:04pm
understand this wannabe scientists, this problem has intensified 100 fold and more over the last 20 years. It is not coincidence that this outbreak of red tide and the toxic blue-green algae slime outbreaks have been similar in intensity and scope recently. Study the things that have changed, the deregulation of pollutants, septic, runoff, etc. the levee's, the dams and canals that destroyed the natural water flow south through the everglades and the limestone and marshy filters with it. Those things were not accidental, nor natural phenomena fools... Now you have panels to speak about the issues. How much do you think you're going to get out of the that? Do you really think they are going to speak out about all the aforementioned items and essentially bite the hand that feeds, even if it is only a little feeding lately...? NOT! Wake up idiots!

The question is how come all

Permalink Submitted by Robert on August 9, 2018 - 11:18am
The question is how come all these genius scientists can't figure out away to kill this algae off. It is like a cancer that kills everything it touches.

Yes, and our bright

I just am not sure whether to

Permalink Submitted by Rpm on August 9, 2018 - 10:24am
I just am not sure whether to laugh or cry about you - of all people - writing this story. Take your sugar-loving and sugar-paying blinders off! And try a little better to bring all of the facts if this story together. You definitely got part of the issue right - history, red tide and naturally occurring. Now, out sown yiur talking pints delivered by the sugar industry, and paint the fuller picture. TeLly, it won’t hurt. Actually, telling the full story will make you feel better — and maybe, just maybe a solution will be found.

Please tell me what I left

Permalink Submitted by Nancy Smith on August 9, 2018 - 3:06pm
Please tell me what I left out. Instead of denigrating me for promoting a scientific forum on red tide, tell readers what you know that I didn't talk about. If you know what the Mote panel is going to say tomorrow, enlighten us. A lot of people are hoping for answers.

It was a good, informative

Permalink Submitted by C Breeze on August 9, 2018 - 6:53pm
It was a good, informative article Nancy. (Trying to deal with these 'usual' witless 'commentors' is akin to herding retarded sheep...all they do is constantly 'bleat' nonsense.)

More after the fact "thoughts

Permalink Submitted by Robert Warner on August 9, 2018 - 7:14am
More after the fact "thoughts and prayers". Gut sound research, gut the structure of those Florida Departments responsible for taking actions over time, gut Florida's ability to enforce it's own environmental laws... Thanks for nothing, Rick.

You are putting blame where

Permalink Submitted by Robert on August 9, 2018 - 11:21am
You are putting blame where it doesn't belong! This has been documented for over 100 years.

Permalink Submitted by Frank on August 9, 2018 - 12:37pm
Even longer . . . . . . . but the intensity of west coast red tides may have increased in some areas tenfold over the last half century that we've been studying them in the field . . . . . . direct runoff appears to be low as a causal nutrient source, but indirectly as a long term driving source - less well understood, at least for the west coast . . . . . . . . however, for areas like the east coast lagoons, a very different picture emerges . . . all these blooms occur along coastal shelves, not the deep gulf . . . the environment (and the ecological niche for individual bloom causing species) is complicated, and one explanation doesn't fit all situations . . . . .