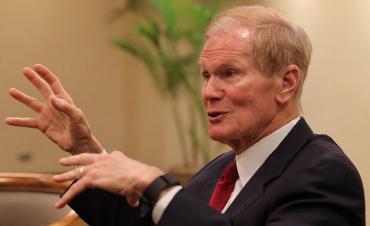 Sen. Nelson, can you finally tell us clueless voters where you stand on Brett Kavanaugh?

All but a handful of senators have declared themselves on President Trump's nominee for the Supreme Court. Why haven't you?

I know it's a tough one, Senator, but come on. You've turned a simple question into a dance.

I can understand your dilemma -- on the one hand, afraid to risk waking up more of the Republican base by voting against a selection they clearly admire, and on the other, afraid of invoking the wrath of Democratic Party boss Chuck Schumer and your wealthiest donors.

But, Bill: You've got to stop saying different things at different times. Do the right thing for voters. Give them the truth.

You rejected Neil Gorsuch, President Trump's first SCOTUS nominee in April 2017. And 14 months later you declared yourself against any and all of the president's potential nominees to replace Justice Kennedy, even before you knew who they were. So you're against Kavanaugh, right?

Oops, not really, you said. I've changed my mind. I'll make my decision on Judge Kavanaugh after I sit down with the man in a fair interview.

But last week, Bill, you went and dodged a New York Times reporter's Kavanaugh questions by claiming you were losing your voice. The old sore throat dodge, Bill?

Lucky for you, laryngitis didn't affect your hands, because you went directly from sore-throat-can't-talk to the keyboard, tapping out a fundraising email attacking Kavanaugh as a “right wing extremist.”

“If you want to stop McConnell's plans to put another right-wing extremist on the Supreme Court, gut affordable health care and dismantle Medicare,” you wrote in your July 16  panhandling email, “you need to give right now to make sure Democrats take back the Senate by winning in Florida.”

The Washington Examiner took you to the woodshed for the absence of honesty on an important issue of the day, Bill. And who can blame them?

Said the Examiner opinion piece, "If Nelson wants to oppose Kavanaugh, he has every right to do so. But don’t dodge questions from reporters before tipping your hand when talking to donors."

It all gave Chris Pack, droll spokesperson for the Senate Leadership Fund, a chance to weigh in on the Kavanaugh shuffle. He called this "the latest chapter in Nelson’s increasingly erratic and forgetful behavior" -- and produced a list of examples:

Pack thinks if Nelson isn't going to rest his brain in retirement, his staff "should stop leaving the poor man unsupervised.”

Nelson already has his script

Permalink Submitted by SoFineSoFla on July 21, 2018 - 8:53pm
Nelson already has his script about Kavanaugh because it was handed to him by Scmucky Chucky Shumer. He may twist and turn all he likes but the fact is he must toe the Dem party line or else. If nothing else, Nelson has shown himself to be a loyal soldier by always spouting the party line.

Permalink Submitted by New Guy on July 20, 2018 - 11:27pm
Nelson needs to retire. Rick Scott was a fine gov and will make a fine senator.

Permalink Submitted by New Guy on July 20, 2018 - 11:27pm
Nelson needs to retire. Rick Scott was a fine gov and will make a fine senator.

Permalink Submitted by Edwards on September 9, 2018 - 10:51am
Scott supports Trump, a sick man. Even Nelson is better than that.

Maybe every Senator should

Permalink Submitted by BillB on July 19, 2018 - 12:02pm
Maybe every Senator should wait to see what comes out of the confirmation hearings before deciding how to vote.

Maybe Billy will vote against

Still a "a space cadet"

Permalink Submitted by C Breeze on July 18, 2018 - 7:14am
"Can't talk now, my pretty nylon "Spacesuit" is still in the drycleaners; but I will be mailing out a "Zippy" 'franked' boilerplate statement, as soon as I "check with 'Nancy-boy' Chuck" on today's acceptable "talking points",...No sense in going off half-cocked on something as important as this,.. we must act as a cohesive unit,... musn't we?" ("My gosh, my week at NASA was never this tough...if you don't count my scream at re-entry..."

Permalink Submitted by RedTide on July 18, 2018 - 11:26am
Geez! Seems like you're only half-cocked all of the time and you're apparently getting by on that basis. (?)

Permalink Submitted by Anonymous on July 18, 2018 - 7:08am
"Can't talk now, my pretty nylon "Spacesuit" is still in the drycleaners; but I will be mailing out a "Zippy" statement, as soon as I "check with 'Nancy-boy' Chuck" on today's acceptable "talking points",...No sense in going off half-cocked on something as important as this,.. we must act as a cohesive unit,... musn't we?"

I'm confused. I thought to

Permalink Submitted by Victoria Webster on July 18, 2018 - 7:02am
I'm confused. I thought to have an open mind and being able to change your mind when new information is learned was the hallmark of mature individuals. Why then call Nelson and other politicians who are open and ready to learn wishy-washy, flip-floppers, or "shufflers"?

It's because this is a right

Permalink Submitted by Ocean Joe on July 18, 2018 - 7:10am
It's because this is a right wing ether hole and the GOP cant really find much mud to throw at Nelson. In his long career, the worst is the 6 cows thing, or that he's old, or that he's a do nothing because they wont bother to look at his record. (BTW exactly what has Adam Putnam, another career pol ever actually accomplished?) Nelson has integrity, Scott cannot even buy it. Scott may buy the election but you can see the latest Gravis poll July 14 (1890 likely voters) has Nelson up by 4 points in spite of all Scott's money and publicity stunts. Another trip to Helsinki and even right wingers will be ready to clear train wreck Donald off the tracks.

The Right can't find anything

Permalink Submitted by Ted Kruze on July 18, 2018 - 11:22am
Good comment! Nelson is a true southern moderate ... and, left on his own, he might actually vote for Kavanaugh. But, I hope he stands up for his party ... and votes 'no'. Kavanaugh is a proven ideologue ... and ideologues shouldn't be judges at any level.

Kavanaugh will vote on the

Permalink Submitted by Dave Hayes on July 20, 2018 - 4:55pm
Kavanaugh will vote on the Laws & Constitution Not for either Party. He has proven himself. The left is just in panic mode as they were in the election of Trump.