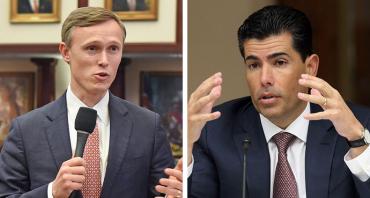 With seven weeks to go until the Republican primary to replace term limited Florida Attorney General Pam Bondi, on Wednesday, state Rep. Frank White, R-Pensacola, unveiled the support of more than a dozen legislators, including the next speaker of the Florida House.

White announced the endorsements of the state legislators with his campaign trumpeting them as “conservative leaders.” At the top of the list of endorsements is incoming state House Speaker Jose Oliva, R-Hialeah, who is scheduled to take over the gavel from outgoing Speaker Richard Corcoran, R-Lutz, after the November elections. This marks the second endorsement Oliva has made in statewide Republican primaries in recent weeks as he threw his support behind U.S. Rep. Ron DeSanits, R-Fla., at the end of last month.

Earlier on Wednesday, state Rep. Ross Spano, R-Riverview, who had been running in the primary but pulled out in April to run for Congress, backed former Judge Ashley Moody.

Moody and White will compete in the Republican primary at the end of next month. In the Democratic primary, state Rep. Sean Shaw, D-Tampa, faces Central Attorney Ryan Torrens.

Maybe I missed it, but what

Permalink Submitted by Lynn Siebert on July 18, 2018 - 12:49pm
Maybe I missed it, but what is Pam Bondi doing next? I love her and hope she isn't dropping out of the political arena.

I think it is very

Permalink Submitted by Gechang Tao on July 11, 2018 - 11:49am
I think it is very unfortunate that these legislators feel it necessary to endorse candidates in the primary. They (and their office) should remain neutral! The “good old boy” mentality at its finest!!