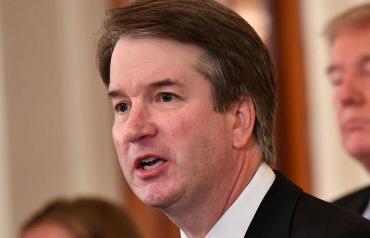 Members of the Florida congressional delegation broke on party lines as they reacted to  President Donald Trump nominating Brett Kavanaugh to be an associate justice of the U.S. Supreme Court, replacing retiring Justice Anthony Kennedy.

Republicans from the Sunshine State quickly lined up behind the nomination.

“Brett Kavanaugh is a qualified, mainstream jurist who possesses the right temperament and experience for the position, and I’m pleased to see his nomination to serve on the U.S. Supreme Court,” said U.S. Sen. Marco Rubio, R-Fla. “My decision on whether to ultimately support Kavanaugh’s nomination will be based on his commitment to original intent, judicial restraint, and the understanding that the Supreme Court is a ‘trier of law’ appellate court and not a ‘trier of fact’ trial court. This is critically important because too many in the federal judicial system today believe it is appropriate for judges to craft new policies and rights instead of interpreting and defending the Constitution as written.

“Regrettably, Senate Democrats made up their minds to oppose this nomination long before tonight’s announcement,” Rubio added. “I would remind them that just over a year-and-a-half ago the American people elected the president and a Republican-controlled Senate. Nevertheless, I am hopeful for a fair and thorough confirmation process as the Senate carefully examines and deliberates Kavanaugh’s nomination to the Supreme Court.”

“I commend President Trump for his selection of Brett Kavanaugh to the Supreme Court. He is an excellent jurist, with a deep and abiding reverence for the Constitution. I have no doubt that, when confirmed, Justice Kavanaugh will serve America’s highest court with honor and integrity,” said U.S. Rep. Matt Gaetz, R-Fla., who sits on the U.S. House Judiciary Committee.

“I also commend President Trump for maintaining the same transparent selection process that he used when he appointed Neil Gorsuch to the Supreme Court. Like Justice Gorsuch, Judge Kavanaugh was on President Trump’s list of potential candidates. Making this list available offered the American public great transparency, and an opportunity to learn about each potential candidate,” Gaetz added. “With this nomination, President Trump has helped shape the future of jurisprudence in America for generations to come, by ensuring that the Supreme Court will faithfully uphold the Constitution as written. This is a good day for Judge Kavanaugh, for the rule of law, and for the United States of America.”

U.S. Sen. Bill Nelson, D-Fla., said he would meet with Kavanaugh before deciding whether to support or oppose the nomination.

“I look forward to meeting with Judge Kavanaugh to discuss his views on several issues such as protecting women's rights, guaranteeing access to health care for those with pre-existing conditions and protecting the right to vote, just to name a few,” Nelson posted on Twitter on Monday night. “I’ll make my decision after that.”

Other Democrats from Florida--including U.S. Reps. Lois Frankel, Alcee Hastings and Debbie Wasserman Schultz--were quick to take aim at Kavanaugh. So was a South Florida Democrat rising up the ranks on the Judiciary Committee.

"With his nomination of Judge Kavanaugh, President Trump is attempting to advance a radical ideological shift of the Supreme Court that will threaten settled fundamental rights and challenge the right of every American to access affordable, high-quality health care,” said U.S. Rep. Ted Deutch, D-Fla., who sits on the House Judiciary Committee. “We know that the president has targeted the Affordable Care Act. He ordered his Justice Department to stop defending the Affordable Care Act. He ordered Republicans in Congress to do everything they could to weaken the law and drive up prices. And now he wants to use the third branch of government to finish the job.

“We know Judge Kavanaugh’s record. If you have a pre-existing condition and benefit from those protections, your coverage is now at risk. Americans with disabilities, nursing mothers, and others who are covered by the ACA’s basic protections are now at a greater risk of discrimination, skyrocketing costs, and loss of coverage,” Deutch added. “There is no longer a theoretical threat to Roe v. Wade. With this nominee, President Trump fulfilled his campaign promise of nominating justices who are hostile to women’s reproductive rights. If confirmed, the conservative wing of the court—composed of five men—will be poised to strip women of the freedom to make their own health choices and control their own futures.

“If Judge Kavanaugh is confirmed, the Supreme Court could so severely weaken women’s right to privacy that even access to basic contraception would be at stake,” Deutch concluded.“President Trump’s decision to nominate Judge Kavanaugh to serve on the Supreme Court means that important precedents that have moved America forward toward a more equal and just society could be shredded. The Senate now has the responsibility to protect Americans from an ideologically-driven nominee whose confirmation would create a Supreme Court bent on setting America decades back in time.”

When is "Little Marco" going

Permalink Submitted by Lynn Siebert on July 18, 2018 - 12:47pm
When is "Little Marco" going to stop acting out his name? I am so disappointed in him. Get over yourself and support your Party and especially YOUR PRESIDENT!

Rubio's choice of words is

Permalink Submitted by Claude Kirk on July 10, 2018 - 11:20am
Rubio's choice of words is very telling of his un American intent. By saying " my decision of whether to Ultimatly support " Rubio leaves the barn door wide open to stab Trump and America in the back on what should be a logical yes vote.