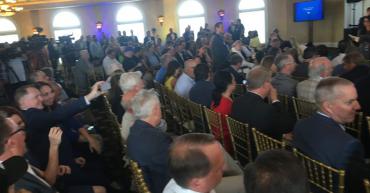 Unveiling of plans for a shiny new $892 million stadium in Ybor City by the Tampa Bay Rays organization Tuesday struck out on the key question: a funding source.

The presentation is seen by many -- supporters, opponents, and skeptics alike -- as an effort to gain converts.  The Rays’ billionaire owner Stu Sternberg is unwilling to pay for the project.

He has said he will chip in $150 million, a number expected to double so that he looks heroic. Laughable, as taxpayers stand to be on the hook for a minimum of $600 million.

With unexpected expenses, inflation, and the expected “cost overruns,” only a fool cannot see the stadium will carry a pricetag of at least $1 billion.

The overwhelmingly white, well-to-do audience -- Tampa’s downtown business crowd -- was expecting a finely tuned, polished presentation of the Rays' last ditch pitch for a taxpayer-financed stadium, a glossy structure to be sure.

Instead, they viewed a glitch-riddled show. The Rays easily can shed stars in their prime but matching slides to commentary from the podium seemed Herculean. Architects, the same ones who designed Petco Park in San Diego and Coors Field in Denver, called the structure “a ballpark,” not a stadium.  Plans are for a translucent roof, plenty of glass, and open space on the perimeter that would make the complex compatible with Ybor’s many street festivals.

Presenters emphasized that the ballpark would be a perfect fit for Ybor, one of the most historic districts in the United States. “Contextual to the city skyline and surrounding area,” in architect-speak.

One would require a graphic imagination for that to come to fruition. The compatibility claim did not square in the least with the drawings, slides, or reality for that matter.  Use “sore” and “thumb” in the same sentence.

With the many reiterations of the glass, openness, and translucency, there was nary a word about the stadium being hurricane-proof. The Rays' season runs from April through September. Hurricane season is from June through November.

Fox Sports Radio overnight host Ben Maller was the first national sportscaster to weigh in on the Rays' plans. “Just another tax scam,” he declared, predicting a franchise exit from Florida to another city. Maller noted the Rays’ anemic attendance and likened the scheme to the Florida Marlins' taxpayer-subsidized stadium in Dade County. Taxpayers there are furious with their white elephant.

Permalink Submitted by Susan For Liberty on July 16, 2018 - 7:53pm
Don't touch the taxpayers' dollars without a pre-approved overwhelming majority vote to do so from the taxpayers themselves.

Permalink Submitted by Robert on July 12, 2018 - 9:16am
There's no parking, there's no real mass transit inferstructre to get people to the stadium. It's the wrong location period. Better location I-4 and I-75 direct access ramps can be built to facilitate traffic flow.

Permalink Submitted by C Breeze on July 12, 2018 - 8:20am
LOVE the "Rays" ... and REALLY comfortable in "Tropicana Field"!!! HATE Buckhorn, and ANY unnecessary drain on taxes and/or Florida Citizen Taxpayers. Move the franchize?!?... Oh well, we'll miss the "Boys of Summer"; but "We" and "They" will survive ! The Cities of Tampa & Miami have ALWAYS been "The tail wagging the political dog" in Florida, both literally & figuratively... unfortunately in both instances (and 250,000 "new" relocated Puerto Ricans won't be a 'positive' change to that...) !

Not one penny from taxpayers!

Permalink Submitted by Charlotte Greenbarg on July 12, 2018 - 7:29am
Not one penny from taxpayers! And the AstroTurf petition to raise the sales tax to 8% has the same multimillionaire behind it. Don’t be fooled...they want that money so they can do the shell game and use it for the huge overruns the stadium will incur. Don’t sign the petitions

Not one penny from taxpayers!

Permalink Submitted by Charlotte Greenbarg on July 12, 2018 - 7:29am
Not one penny from taxpayers! And the AstroTurf petition to raise the sales tax to 8% has the same multimillionaire behind it. Don’t be fooled...they want that money so they can do the shell game and use it for the huge overruns the stadium will incur. Don’t sign the petitions

If a professional sports

Permalink Submitted by Claude Kirk on July 12, 2018 - 2:47am
If a professional sports franchise cannot support its self it needs to get the hell out of town. Nobody cares about the Tampa Rays anyway. #letitgo

The same old Game. How to

Permalink Submitted by The stadium gam... on July 11, 2018 - 6:15pm
The same old Game. How to make money off the taxpayer. The rich pay little. He will pay $150 mil on a billion. Politicians love the moneymaking side deals. The press present it as a gift. Another screw job on taxpayers.

There is not now, or ever

Permalink Submitted by Kenneth Johnson on July 11, 2018 - 1:09pm
There is not now, or ever will be, an appetite within the vast majority of people in Hillsborough County, for any more of the professional sports teams' arrogance and ignorance, whether we continue to pay for it or not. There is no need for any further graphics, or even dialog, regarding more of the same BS. It's time for the Ray's, and all proponents of MLB anywhere in Hillsborough County, to shut up and go away.

I am against a mostly

Permalink Submitted by Larry W on July 11, 2018 - 12:46pm
I am against a mostly taxpayer-financed stadium. Sternberg should pay 60% or more of the building cost. Now to the writing of the story. I don't know you Mr. Bleyer and I don't know or care what color you are. Twice it was brought up the color of the "well-to-do audience". It was uncalled for and shows the anti-white bias you appear to have. Next time you write a story keep your racism out of it.

My sentiments exactly of Mr.

Permalink Submitted by Barry Karnes on July 12, 2018 - 7:22am
My sentiments exactly of Mr. Bleyers writings. Stuck out like a sore thumb. It's this type of shit why I no longer subscribe to ANY newspaper. I won't apologize for being white, and I certainly am trying to obtain becoming "well-to-do" status. The horrors!

I agree with you

Permalink Submitted by Greg Johnson on July 11, 2018 - 7:51pm
I agree with you wholeheartedly as I'm tired of media writers always including race in their story; low class as well unprofessional.

Permalink Submitted by Ted Kruze on July 11, 2018 - 12:00pm
Tampa/Hillsborough politicos and taxpayers are nuts of they put up any more than a token amount to pay for this stadium. And, the rendering of the proposed stadium looks to be about as nutty as Sternberg's proposal ten or eleven years ago for a waterfront stadium in St. Pete with a 'flying tarpaulin' for a 'sunshade'! Let Sternberg, the Rays, and MLB, Inc. pay for their own stadium ... IN FULL!