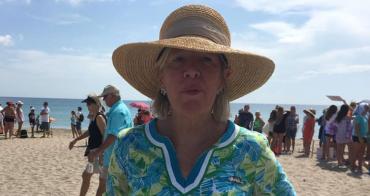 Still facing criminal charges for alleged public records violations in 2013, Martin County Commissioner Sarah Heard, a Republican, filed for re-election June 22, on the last day of the qualifying period. She paid the $3,810 qualifying fee from a $5,000 loan to herself and rented a post office box in Palm City.

A Rocky Point resident -- same district in which embattled former county commissioner Maggy Hurchalla lives -- Heard is seeking her fifth four-year term as the District 4 representative for the Port Salerno and Tropical Farms areas. She was elected to office in 2002, defeating Elmira Gainey.

She continues to insist she is innocent of the misdemeanor charges and was successful in getting her case separated from those of other indicted commissioners, Ed Fielding and former commissioner Anne Scott. A new date has not yet been set for Heard’s jury trial.

Heard was indicted by a Martin County grand jury on Jan. 4, 2018, on two counts of violating Florida’s public records laws. The first count pertained to a Lake Point Restoration public records request submitted to her on Feb. 7, 2013, to which she allegedly failed to respond, and the second count pertains to her alleged failure to maintain the public records in her care, custody and control during the time period of Sept. 1, 2012 through Feb. 7, 2013.

Heard told the court she could not respond to Lake Point’s public records request because her Yahoo! email account had been hacked, which she claims destroyed all emails on her personal computer for the previous eight years. State law requires that public records be preserved and protected. Infractions are punishable by fines and/or jail time.

Lake Point attorneys were seeking the email correspondence between commissioners and environmentalist Hurchalla regarding the Lake Point mining and water restoration project near Indiantown, which they needed to present as evidence in their tortious interference lawsuit against Hurchalla.

(Lake Point won the lawsuit on Feb. 14, based largely on recovered emails from Fielding’s personal computer. The jury awarded the company $4.3 million in damages as a result of Hurchalla’s actions. Hurchalla has appealed.)

In previous court testimony, Martin County’s information technology forensics expert reported that he found no evidence of a hack that could delete emails from Heard’s personal email account. At the conclusion of the civil trial against the county, the court sanctioned Martin County for $502,000 based on the unlawful actions primarily of Heard, Fielding and Scott.

Challenging Heard in the county commission District 4 race are Harold Markey, Niki Norton and Edward “Butch” Olsen Jr., all Republicans. The election will be Aug. 28 and is open to all registered voters, regardless of party affiliation.

Barbara Clowdus is editor and publisher of Martin County Currents, which first published this story.

(EDITOR'S NOTE: Heard was selected among The Santa Fe Reporter's "Worst in government transparency" for 2018. Click here for the story.)

For years Maggie H. led the

Permalink Submitted by Roger on July 3, 2018 - 1:58pm
For years Maggie H. led the campaign to get Martin County voters to accept her definition of "quality of life" which included letting potholes replace paving on our roads, successfully preventing the Houston Astros from coming here for spring training, and stopping anything else that might have helped our economy. Then along came Sarah H. to carry on for Maggie, aided and abetted by people like Ed Fielding to continue fighting against anything resembling healthy growth. Let the upcoming primary put an end to it.

Really. Re-election, on what

Permalink Submitted by Stan Kleinberg on July 2, 2018 - 2:59pm
Really. Re-election, on what good has she ever done in the sunshine. Bet her immature supporters at TC Palm will squeal happily with each other and wave their biased ink pens for her. What a load of garbage this commissioner carries and how the local silly,"worried about their jobs", press promotes it! Gannett rules.

Sarah has been a champion for

Permalink Submitted by Irene Gomes on July 2, 2018 - 8:42pm
Sarah has been a champion for the environment and quality of life in Martin County. She believes in responsible growth unlike other Commissioners (Doug Smith) that are creating a problem in Martin county with overbuilding and in areas that buildings don't belong like at the corner of the Jensen Beach causeway.

Permalink Submitted by Daniel on July 2, 2018 - 2:01pm
Well, if deleting emails worked for Hillary, why not Heard?

Hey Barbara why don't you

Permalink Submitted by Anonymous on July 2, 2018 - 1:39pm
Hey Barbara why don't you write a story about Yancey and Polley, and how they, and many others have been ripping off the county for years? Or do they not matter just the commissioners that try to stop this kind of stuff?

Bet she wins no problem

Ain't that somethin'! These

Here we go the dog ate my

Permalink Submitted by John on July 2, 2018 - 12:37pm
Here we go the dog ate my homework. Used my personal computer not the county system provided for county business. Politicians who continue to think they can do what they want and think they know better need to be brought to the table and made to KNOW that the law and rules of procedure are not negotiable.