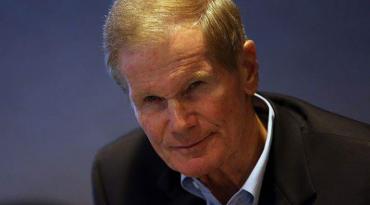 It's well known political issues can cause candidates to change position in an election year. In a stark advancement of that premise, Bill Nelson just proved he's in such a nervous position with his reelection campaign, he had to change his position on a judicial nominee he recommended for a U.S. District Court post in Florida.

The sudden turnabout has to be regarded as a desperate lurch for the man in a struggle to retain his Senate seat against Gov. Rick Scott.

In November Allen Winsor was included on a short list of nominees for judicial positions to be submitted to the White House for possible nomination. Prior to submission, according to protocol, the candidate names are sent to the state's two senators for initial approval. Senator Nelson sat and interviewed Winsor at length before he recommended the judge to the white House.

But things have changed quickly for Bill Nelson since then -- including very publicly having to change his mind.

The Rick Scott candidacy has taken off and recent polls show him in the lead. The governor has even been trending better with Hispanics in the state, normally a core demographic for Nelson. Then in April, President Trump selected Winsor from the list to take the seat in Florida’s North District Court. This selection kicked off the nomination process -- which is when life became more uncomfortable for the Sunshine State's senior senator.

Trump’s nomination brought Winsor’s name up before the Senate judiciary committee. It was there that a number of issues were brought forward regarding the judge. Of primary concern was that while serving as solicitor general under Attorney General Pam Bondi, Winsor argued in favor of the state marriage law, an anti-same-sex marriage law that had been approved by Florida voters.

Despite arguing for a state law that voters had affirmed, this was deemed an offensive position for a judge, according to Democrats. (That law was eventually struck down by a judges panel in that same District Court Winsor is nominated to join.) He narrowly was approved to move forward for full Senate approval, but that vote was strictly along party lines. This meant Bill Nelson now was looking at a judicial nominee he supported being denied by his own party.

On Friday Nelson declared that he was in fact now going to oppose the same man he spoke with and personally approved. In a released statement, Nelson announced, “Because of the information brought up by the Senate Judiciary Committee, I will vote against the confirmation of Allen Winsor.”

Rick Scott’s camp wasted no time in reacting to the decision. Lauren Schenone, press secretary for Scott’s Senate run said, “Bill Nelson is so partisan that a small group of out-of-state Democrats can force him to vote against a Floridian who he interviewed, recommended and supported.”

There was possibly more motivation behind the senator flipping his opinion. The Democratic operation Senate Majority PAC, coincidentally on Friday, began an anti-Scott ad campaign in the state. This partisan PAC is operated by Senate Democratic leader Chuck Schumer. This past February Nelson noted the importance of the New York senator in his race.

When asked about the possibility of Democrats being challenged on campaign funding for the November elections, Nelson had this to say:  “You omitted the biggest factor -- Chuck Schumer.” Little surprise, then, that with a struggling campaign, the senator who tries to position himself under the “Independent” banner would try to appease party leadership by completely changing his stance on a court appointee he earlier had wholeheartedly approved.

Major Nelson and his genie,

Permalink Submitted by BocaBoomer on June 20, 2018 - 6:42am
This flip-flop provides vivid proof Nelson is a lemming of the liberal Democratic agenda, not his own person but a true party hack. How disgraceful. Sad. Very sad.

Permalink Submitted by #RejectStupidity on June 19, 2018 - 9:28am
Democrat commenters here miss the point. Bill Nelson is lazy. Work ethic challenged. Nelson should have done his homework on Winsor's record BEFORE he okayed his nomination. Why didn't he know about Winsor's important cases? I don't want to elect a senator who is half there every day.

Wild Bill is far from done.

Permalink Submitted by Ocean Joe on June 19, 2018 - 9:06am
Wild Bill is far from done. Ricky outspends by $15 million and hardly moved the needle (1 point lead per Quinnipiac poll a few days ago). Phil Levine spends $11 million and grabbed a double digit lead. Why? We already know who Rick Scott is. The more he shows his face the more we are reminded. Nelson chose not to proceed with support for an instrument in the war against gay rights. What is so great about discrimination, anyway? BTW looks like ripping families apart at the border isn't such a great practice....Bill Nelson says "do the right thing and the politics will take care of itself." Decency and moderation in politics is a fleeting thing. Get out the limbo pole and watch Ricky do his thing!

What you call "discrimination

Permalink Submitted by Brad Slager on June 19, 2018 - 1:46pm
What you call "discrimination" was actually the AG Office upholding a law that was approved by voters. That is actually their job.

Permalink Submitted by really? on June 19, 2018 - 8:34am
huge flip flop of major proportions, extravagant, mind blowing....too funny. Anything is better than the criminal who made his money on the backs of elderly Floridians, but most of you, like him, are from somewhere else anyway and could care less about Floridians. That leaves the rest of us to decide. An old guy, or a criminal from the midwest? I'll take the old guy all day long given those choices...

Nelson is done. The DNC has

Permalink Submitted by RepublicanConscience on June 19, 2018 - 7:59am
Nelson is done. The DNC has limited resources and will drop Nelson like a hot potato seeing it a a futile effort. You heard it first from me.

Permalink Submitted by Robert Warner on June 19, 2018 - 8:06am
Not really, "RepulicanConscience" (a full frontal oxymoron). Actually Bill Nelson shows he thinks critically for himself. A good man that works for Florida and all Floridians -