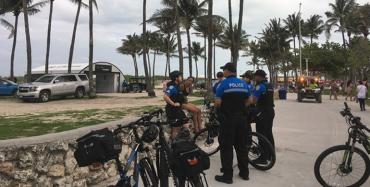 Philip Levine really should stop touting his "successful" police reforms in Miami Beach. He doesn't have any.

The I'm-a-changemaker story he tells African-Americans on the campaign trail is an effort to lure their vote, but the evidence doesn't back it up.

Look at the video clip from the last televised gubernatorial candidate debate displayed on this page. To hear the former mayor, he moved heaven and earth to make it so African-Americans would no longer have to fear their police department, that arrests of blacks would drop, that a new day of racial equity had dawned in the city. His message is that Miami Beach is a kinder, gentler place for black people to live.

"The issue today with politicians is, people say things a lot of times that they've never actually done before," he told Floridians during the debate. "When I became mayor, a few months before, an African-American male was shot 100-or-something times in his car Memorial Day weekend. I said, 'If I become mayor, I'll reform the police department,' and that's what I did.

"I put in a new chief, a deputy chief -- an African-American woman, the highest ranking in the history of our city -- we changed captains, we changed majors, we put cameras on our police before Ferguson. So it's important for people to say, 'Have you done it before?' I did it as a mayor of Miami Beach and I can tell you, when you do it, you don't get the police endorsement."

Who knows, maybe that's what Levine hoped would happen when he was elected mayor. But it never did.

For all the changes the mayor made when he took office in 2013, blacks in the city got bupkus.

In fact, they got worse than that.

In a city with a black population of only 4.4 percent, TOTAL arrests dropped slightly most years. But the percentage of arrests of African-Americans didn't go down a lick while Levine was mayor. In fact, the percentage kept climbing, year over year.

Statistics are all available online in the Florida Department of Law Enforcement (FDLE) records, available here.

Here's a quick glance at the Miami Beach numbers:

In June 2017, Levine and his city commissioners weren't celebrating their police-reform successes. They were bemoaning crime-gone-wild on the city's main drag, even though it apparently wasn't.

According to a story in the Miami New Times, "The way Miami Beach city commissioners tell it, Ocean Drive -- the most famous street in Miami -- has turned into a literal war zone. Drug dealers are roaming the streets, thieves are clubbing old ladies over the head, and you might lose your life if you hang out on the tourist-heavy street on the wrong night.

Can this be the city Levine claims one year later he reformed?

"Another election for us to see South Florida's black community taken for granted," Carlianne Mahoney, who lives two blocks off Ocean Drive, told me Thursday. "Philip Levine talks like he cares about one of our biggest issues, racial profiling, but all he wants is our vote. That's what they all want."

Mahoney, a 36-year-old bank teller and mother of three, said she probably wouldn't be voting in the midterm elections. "Why should we engage with the candidates when they don't engage with us?"

It's time for candidate Levine to delete his police-reform talking points. They're an outrage to African-Americans and soon enough they'll be an embarrassment for his campaign.

Permalink Submitted by Oops! on June 15, 2018 - 12:23pm
Looks like Levine said something he’s never done! Statistics don’t lie, but Levine sure as hell does. When pandering goes wrong! Ha!

Permalink Submitted by Joe Mangum on June 15, 2018 - 11:32am
typical partisan hit piece. You focused only on arrest statistics to try to make him look bad. They did go down somewhat from 2013. However, what he was saying is he reformed the Police dept. He made the Dept. more inclusive at the highest levels and made their interactions more transparent by adding body cameras, etc. You have little opportunity to change crime, breaking the law is breaking the law. I am not even a Levine fan, nor a Dem and I can see this is a hit piece aimed at making him look bad. If your going to look at crime, why didn't you mention Gillum and Tallahassee's terrible crime rate, probably because he wasn't arguably the number 1 Dem in the race besides Graham. It would be great for everyone if the media didn't act exactly like the politicians, but then that doesn't sell newspapers or attract visitors does it?

The story is entirely fair,

Permalink Submitted by Bobby Johnson on June 16, 2018 - 10:01am
The story is entirely fair, because nearly 40% of arrests are Black people, in a town comprised of less than 5% Black people... What the hell?

The story was fair because

Permalink Submitted by Clay Feldon on June 15, 2018 - 11:57am
The story was fair because Levine starts out talking about a African American who got blown away which motivated him to make changes & then he talks about a African American chief deputy. He did less than nothing to stop crime or help black people in Miami Beach. This story is not a hit piece & I am glad it was said. I know Miami Beach & the cops love tourists but screw minorities which worse under Levine.

Has anyone looked at the

Permalink Submitted by RGB on June 15, 2018 - 8:16am
Has anyone looked at the reason the rate has increased.......other than police and poor City management? Just interested.

Philip Levine should have

Permalink Submitted by Anonymous on June 15, 2018 - 8:19am
Philip Levine should have looked at that while he was in office, since it looks like it got worse every year he was there. How can he tell us to look at what he did, when it looks like what he did was target African Americans who dated set foot in lily-white Miami Beach?

It’s no secret that Miami

Permalink Submitted by MAGA Miami Beach on June 15, 2018 - 8:08am
It’s no secret that Miami Beach has been a “sun-down” city for years. It started well before Philip Levine, he just didn’t do anything to make it better. Contrary to what he says on the campaign trail. He now wants the black vote, and he clearly will lie and try to buy it. Statistics don’t lie, though. I’m surprised the other candidates didn’t look at this too. Shame on you Levine. Shame on you!

If you were to shame Levine,

Permalink Submitted by SuperMarioBros99thx on June 15, 2018 - 11:07pm
If you were to shame Levine, is OK and i could believe in that. But... "MAGA"? I believe your political positions could end up increasing crime rates instead of decreasing crime rates, and would likely to support police state more than the most of us would (i am backing up this claim with what i have seen in the rest of world and some U.S. states that have RW governments back then and to now). Don't try to be hypocritical and partisan - If you want to decrease crime rates by your beliefs it's likely that it would not work. You should not try to appropriate progressive positions without supporting and believing in these positions. Thanks.

Permalink Submitted by IKIA on June 15, 2018 - 11:25am
Yeah ... "lying" ... sorta like the compulsive/obsessive lying that Trump engages in! A bloviating liar and serial cheater! A real role model for American youth!

"Pay no attention to the

"Pay no attention to the

Look into the "Urban Weekend"

Permalink Submitted by Ocean Joe on June 15, 2018 - 7:41am
Look into the "Urban Weekend" festival, your statistics are misleading. There is no way the numbers cited are from Miami Beach residents. They are visitors. And without fail, every Urban Weekend has a number of folks shot dead, since everybody seems to pack heat on their way to this party. Miami Beach does not ban it, that would be racist. But they have stepped up law enforcement after prior shenanigans. Gwen will be the better candidate in the fall, so go ahead and attack Levine, but get your facts straight. And whatever you do, don't plan a visit to the Beach while this event is going on.

As a cop, I worked undercover

Permalink Submitted by Steven Hadley Sr on June 15, 2018 - 4:20pm
As a cop, I worked undercover and missed every birthday celebration for my youngest daughter as this fell on her birthday. My job was to be low key and arrest those who needed to be arrested. I was so low key that Miami Beach uniformed officers found some reason to harass me, there supposedly brother in blue. Reform starts at the bottom!

Permalink Submitted by Ocean Joe on June 15, 2018 - 7:47am
'Visitors' includes folks who make the 10 minute drive across the causeway from crime-ridden and Republican run Miami.

Permalink Submitted by Levine is Lying on June 15, 2018 - 6:45am
Miami Beach police department is horrible, to include the ones Philip Levine installed. The brutality they inflict, particularly on African Americans, is insane. I can’t believe Levine has the nerve to open his mouth and claim anything about that cabal of knuckle-draggers has been reformed!

Permalink Submitted by Claude Kirk on June 15, 2018 - 5:47am
Levine's idea's to lure black voters is like rearranging the deck chairs on the Titanic. A lot of mis-guided busy work that does nothing to address the systemic problems of why such a small percentage of the population commits such a large percentage of the crime. Following in Obama's footsteps and pretending like it's the fault of the police department only serves to further divide us and offers no real solutions other than making a few vocal uber leftists (mostly Caucasians) happy. Zero credibility to Levine. Not even an original bit of political trickery on Levine's part.

Happy somebody is writing the

Permalink Submitted by Bobby Johnson on June 15, 2018 - 4:27am
Happy somebody is writing the truth about Philip Levine. He's completely full of crap!