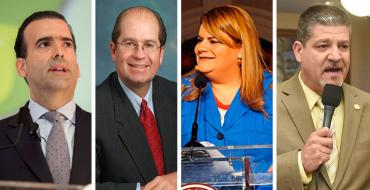 The Republican Party of Florida (RPOF) has announced it will host a “Puerto Rico Rising” panel on Friday as part of its 2018 Sunshine Summit in Orlando.

“A little over six months ago, Hurricane Maria devastated the island of Puerto Rico. We saw this nation come together for the Puerto Rican community, and although many are still struggling to rebuild their lives, progress has been made," RPOF Chairman Blaise Ingoglia said in a press statement Wednesday. "The Puerto Rican community has proven its resilience and together the people will continue rising. We look forward to an engaging discussion with these incredible Puerto Rican champions, and solidifying our commitment to aiding our fellow citizens on and off the island.”

Cortes said he believes the Florida event is important for Puerto Ricans.

“As a Puerto Rican-American, I am proud of the work the Republican Party is doing to aid my brothers and sisters in the aftermath of Hurricane Maria,” he said. “We must continue ensuring assistance and stability to families displaced and those still on the island.  I look forward to a productive dialogue about long term, effective solutions for these American citizens.”

Carrión said he heartily agrees with Cortes. "We on the Oversight Board are tasked with certifying a fiscal plan for the island that will lead to structurally sound fiscally responsible, balanced budgets, and the restructuring of over $172 billion in public debt -- a legacy of 40 years of overspending by the government of Puerto Rico. I look forward to addressing the attendees of the Sunshine Summit, so they can hear our plan of action for a more prosperous Puerto Rico.”

“The scale and scope of devastation left by Hurricanes Irma and Maria in Puerto Rico has been unprecedented,” Congresswoman Jenniffer González-Colón chimed in. “My colleagues in Congress, the Administration, Gov. (Rick) Scott and Sen. Marco Rubio have been exceptional in providing resources and funding to help the island rebuild and in Florida accommodating our fellow U.S. citizens that were displaced and forced to seek refuge outside the island. I applaud with gratitude the continued support and commitment of all involved to aid American citizens residing in Puerto Rico and look forward to our panel at the Sunshine Summit explaining how far along we have come in these efforts.”

Fuentes said, “It is an honor to accept the invitation of Chairman Ingoglia ... The massive resources that the Republican administration and Congress have made available to rebuild Puerto Rico will ensure a brighter future for all our fellow citizens on the Island and help improve our preparedness for future natural disasters that may occur."

The RPOF Sunshine Summit, this year at the Gaylord Palms Resort & Convention Center, is a unique two-day event where Republican statewide candidates will share their vision for Florida and this nation, with more than 1,500 voters, grassroots leaders and party activists. Kicking off June 28 with a nationally televised FOX News Channel Florida Gubernatorial Primary Debate, moderated by Special Report anchor Bret Baier and The Story anchor Martha MacCallum, the Summit is expected to showcase the best of the best in Florida Republican politics.

Permalink Submitted by Garrin H. on June 12, 2018 - 10:40am
Puerto Ricans know who put them in this predicament. It was the SLOW RESPONSE offered by Donald Trump and his administration. And guess who is the chair of a pro-Trump PAC? Florida Governor Rick Scott!! He is Donald Trump's right-hand man. Be sure to vote for Senator Bill Nelson for U.S. Senate. He genuinely does care about the Puerto Rican people. https://www.politico.com/states/florida/story/2016/07/rick-scott-to-chair-pro-trump-super-pac-104308

He bill nelson doesnt give a

Permalink Submitted by Elvin Mendez on June 25, 2018 - 1:39pm
He bill nelson doesnt give a shit for Puerto Rico he has been in congress and we had continued being a colony. Rick scott is the one

When is someone going to

Permalink Submitted by Laurie on June 7, 2018 - 2:35am
When is someone going to explain to the Puerto Rican people the meaning of "Disaster Capitalism"?

In total agreement with your

Permalink Submitted by David Washington on June 7, 2018 - 9:01am
In total agreement with your statement.

Permalink Submitted by Anonymous on June 6, 2018 - 4:26pm
Rick Scott has taken PR seriously. He has sent resources support, and worked with immigrants. This RPOF thing is a stage show, but the real things have been happening

Rick Scott is a FOOL who

Permalink Submitted by Garrin H. on June 12, 2018 - 10:43am
Rick Scott is a FOOL who supports the man that threw paper towels at Puerto Ricans.

Puerto Rico needs its own CCC

Permalink Submitted by IKIA on June 6, 2018 - 4:13pm
Puerto Rico needs its own CCC-type or WPA-type island-wide re-construction effort ... fully funded by Congress ... and for as long as it takes to get the residential and commercial properties on the island completely re-built or replaced!

Permalink Submitted by Jim Breitenfeld on June 6, 2018 - 4:12pm
What a bunch of B.S. It is partisan politics that put the island and its USVI neighbors in jeopardy long before Irma and Maria hit. Now, when there might be some votes to be gained, we see all sorts of care and concern. These are American citizens and lives here----not members of one party or the other or votes to be chased! "We're doing all we can" is not a good answer!!

I hope political posturing is

Permalink Submitted by Frank Nero on June 6, 2018 - 3:22pm
I hope political posturing is at a minimum and substantive discussion is the rule Puerto Rico doesn't not need more finger pointing but rather Solutions to both short and long term solutions to a myriad of challenges and opportunities No paper towels please !