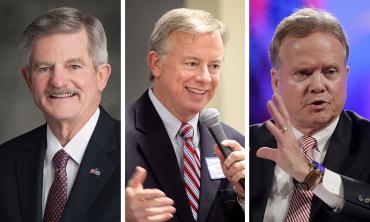 The American Petroleum Institute (API) launched its “Explore Offshore” efforts on Wednesday, calling on expanding energy exploration efforts including in the eastern part of the Gulf of Mexico.

Leading the “Explore Offshore” efforts in Florida are former Lt. Gov. Jeff Kottkamp and Dr.  Miriam Ramirez who served in the Senate of Puerto Rico. Kottkamp served under then Gov. Charlie Crist who has opposed drilling in the Gulf, even calling for a special legislative session on the issue. Crist held that special session after the massive oil spill in the Gulf in 2010.  However, while Crist started drifting to the left and that and other issues to run for the U.S. Senate in 2010 with no party affiliation and eventually join the Democrats, Kottkamp has remained a conservative Republican.

“As a native Puerto Rican and a volunteer to rebuild Puerto Rico from the devastation of Hurricane Maria, I know firsthand that we should not take for granted access to reliable energy,” Ramirez said on Wednesday. “The Department of the Interior took a step in the right direction by proposing to open up additional areas of the Eastern Gulf of Mexico to new exploration for oil and natural gas. Our neighbors in the Gulf of Mexico support thriving tourism industries all while developing offshore energy resources that create high-paying jobs to those states, provide much needed state revenue and economic investment, and deliver greater energy security to America.”

"With over 20 million residents and 110 million annual visitors---the availability of affordable energy is critical to our quality of life in Florida,” Kottkamp said. “Access to new sources of domestic oil and natural gas is important to maintain or quality of life in the Sunshine State.  As we consider exploration for new energy sources we must also be mindful Florida's environment.  We look forward to working with our local leaders to discuss ways to maintain our state's natural beauty while at the same time expanding opportunities to keep our nation energy independent."

“I’ve had the great honor of serving our country in the military for 27 years, and serving my county as a commissioner,” Harris said. “My focus is on ensuring that future generations get to enjoy the same opportunities that I have, in a nation that is safe and secure. A key to making that possible is putting in place energy policies that support the constant, reliable and affordable supply of energy our families and businesses will always need to grow and thrive. The more of that energy that comes from our own borders the better. It’s time we used recent advances in technology and science to find out exactly what energy resources lay in our waters, and how we can produce that energy in a responsible manner in the years ahead. That’s how we will make Florida and America more energy secure.”

Noting that oil and natural gas make up most electricity use at the state and national levels, Explore Offshore insisted that energy exploration in the Gulf and off the coast of Florida could lead to more than 56,000 new jobs by 2035 and added $1 billion annually to the state revenue and $2.6 billion in private development.

The sun. The sun is an

Permalink Submitted by Miss Info on June 7, 2018 - 11:46am
The sun. The sun is an endless source of energy. This is Florida. Why do we threaten our beautiful waters?

Not a chance in hell they'll

Permalink Submitted by jerry on June 7, 2018 - 7:12am
Not a chance in hell they'll drill off Florida as suicide politically from the oil spill possibility...………. Lest you forget it ruined our tourist industry for 2 yrs when we needed it most, causing people, talent in many fields to leave the state....………………. Next there is no cost effective oil, NG there has ever been found. ……………… They already got the best part, lot 181 12? yrs ago and they haven't even drilled there yet...……… What's up with that?...………. I hate to tell you people but the oil era is coming to an abrupt end as RE and EVs spreads at a fraction of using FFs cost...…….. And best of all it'll be home, building, etc owners making their own for a fraction of utilities prices...………...Biggest tell is the big FF majors have sold most all their reserves that they know they no longer need, just keeping enough for 20 yrs of decreasing demand and buying up RE companies as investments when oil , FF demand is gone.

I hate to break the news to

With all the hot air about

Permalink Submitted by Ocean Joe on June 6, 2018 - 10:34pm
With all the hot air about "oil industry responsibility" Wake Up may want to open a wind farm.

Bobby, we live in a world

Permalink Submitted by Wake Up on June 6, 2018 - 4:48pm
Bobby, we live in a world that runs on petrochemicals, and that oil and gas has to come from the ground. They do that with a drill and by fracking. Who's gonna do it? You? The oil and gas companies have a greater responsibility than you can possibly fathom. You weep for your sand, and you curse the drillers. You have that luxury. You have the luxury of not knowing what we know -- that oil and gas drilling, while tragic, probably has saved your job and your economy. While the existence of oil and gas drilling, while grotesque and incomprehensible to you, saves jobs. You don't want the truth because deep down in places you don't talk about at cocktail parties, drum circles and grocery store die ins, you want oil and gas drilling. You need oil and gas drilling. The oil and gas explorers use words like "safety," "system integrity," "reliability." They use these words as the backbone of a life spent providing something that runs your power plants. You use them as a punch line. Oil and gas explorers have neither the time nor the inclination to explain themselves to a person like you, Bobby, who rises and sleeps under the air conditioning blanket of the electricity that they provide and then questions the manner in which it is provided. They would rather that you just said "thank you" and went on your way. Otherwise, they suggest you give up your car, sell your home, grab a tent and move into the Everglades or forest and live a life without petrochemicals. Either way, they don't give a DAMN where you think their business should be, because it's already here!

Permalink Submitted by jerry on June 7, 2018 - 6:55am
So much wrong Bobby...……….. First we will be far better off without the oil industry making 3x the jobs as RE costs are jobs, materials, not sucking oil out of the ground supporting oil dictators, terrorists, massive corporate welfare and poisoning everyone and flooding our state with saltwater, already claiming over 5k sq miles now under salt water in the last 30 yr and speeding up...……...Next we now pay $600B/yr in higher taxes, healthcare, military, etc pollution, etc FF costs that would disappear once off FFs...……Enough to balance the national budget……..And home, building solar, wind will cost a tiny fraction of doing it with FFs...………………...EVs only require 15% of a FF car's energy use making it easy, cheap to charge them from the sun, etc too...……..Fact is Florida would have many more RE jobs if the utilities didn't own the Republican party...…………… I use solar for my A/C and everything else including my lightweight EVs at a tiny cost of FF utility or gasoline prices...………. Do you really want to pay more for polluting power and not gain all the jobs RE makes?...…………. As a real fiscal conservative I see no other smart way...……… Vs your way is the massive corporate welfare way that poisons us and floods our streets increasingly. ……………. Which is actually fiscally conservative? Be honest if you can?

There are much better places

Permalink Submitted by Tampaguy on June 6, 2018 - 1:49pm
There are much better places to drill for gas/oil than the "Seafood Breadbasket" of the Gulf of Mexico. Florida is already supplying a heavy load of locally produced foodstuffs (as are many Carribean countries). The Atlantic Ocean offers geologists just as good of a chance of drilling high-output platforms, with much less risk to American life and limb - America is already a "Net Exporter" of liquid gold - why take a chance on screwing up our wonderful food supply? The API will bite on ANY opportunity to punch holes anywhere.

If the voters keep putting

Permalink Submitted by IKIA on June 6, 2018 - 1:38pm
If the voters keep putting Republicans in office in this state (especially with large majorities in both houses of the legislature) ... down the road ... there are bound to be oil-drilling platforms right off the beaches from the Big Bend down to the Thousand Islands! Count on it! (You can see the continuing pollution and other environmental damage these GOP politicos keep letting Mosaic engage in!)

So stupid to even think about

Permalink Submitted by EMS on June 6, 2018 - 1:26pm
So stupid to even think about messing with our beaches here. Stupid. Stupid. And their plan is to go offshore to the Destin Dome. Yeah thats brilliant. Rate of return isn't there honestly for all this risk. Open up Colorado to fracking and go inland before you mess around offshore.

Permalink Submitted by Wake Up on June 6, 2018 - 1:24pm
Florida does relatively nothing to share the burden of oil and gas production in the United States. All Florida does is consume, consume, consume. In the meantime, pipelines cross the country from one end to the other to supply this state's insatiable thirst for gasoline and natural gas-powered electricity. We send our young men and women to the other side of the Earth to protect petrochemical producers and supply routes. Many have died to keep the price of gasoline at $2.80. Yes, the state provides a nice playground with sun and sand. What else? (Que the crickets!)

Yes many have died at the

Permalink Submitted by jerry on June 7, 2018 - 7:02am
Yes many have died at the alter of corporate welfare FF gets needlessly. Why? .........…..There are many cheaper, better ways than oil that kills our soldiers, supports oil dictators, terrorists as they poison our air, water than giving FFs $600B in corporate welfare...………….. Is that fiscally conservative?...………….. Fact is the same money over 3 yrs we could completely get off FFs over 10 yrs and energy would end up costing half as much, stable in price and not pollute plus make 3x the US, local jobs...……………. Which is better?

As a native Floridian, I don

Permalink Submitted by the truth on June 6, 2018 - 1:15pm
As a native Floridian, I don't just say NO... I say HELL NO! I don't care what the are paying you to bribe, eh, convince the legislature to open up FL again to offshore drilling. Isn't one Deepwater Horizon enough? It is for me and my family...