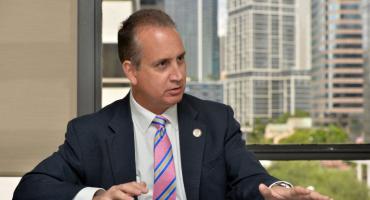 U.S. Rep. Mario Diaz-Balart, R-Fla., was the one South Florida Republican in the state congressional delegation to back Donald Trump’s presidential bid in 2016 and he shows no signs of backing down even as he draws fire from a Democratic rival.

As Trump only carried the district by 2 percent over Hillary Clinton, there are some risks for Diaz-Balart in associating with the White House. But, so far, that hasn’t been a problem for Diaz-Balart and he doubled down on his support of Trump on Friday.

Diaz-Balart cheered the latest national unemployment numbers on Friday which showed the lowest unemployment rate in 18 years and said that Trump’s tax cut package was largely responsible for the good news.

“Today’s report is an indicator of the success of the Tax Cuts and Jobs Act,” Diaz-Balart said. “Individuals continue to enter the job market, walking away from dependence and poverty and finding themselves self-sufficient and independent. Thanks to tax reform and its effect on our economy, the unemployment rate is the lowest it has been in over 18 years. With this quarter’s GDP forecasted to expand at above 4 percent, the American people are confident in our bustling economy and the pro-growth policies I am proud to champion with my House Republican colleagues. It is clear that Democratic proposals to raise taxes would hurt the American people and reverse these gains.”

Diaz-Balart will face former Judge Mary Barzee Flores in November. Last month, Flores jumped out of the crowded race for the seat that Ros-Lehtinen is leaving to challenge Diaz-Balart. In recent days, her team ramped up the attacks on Diaz-Balart, looking to tie him to Trump.

At the end of May, Sam Miller, Flores’ campaign manager, came out swinging at Diaz-Balart, insisting the Republican “does not reflect the viewpoints of everyone in the district and has demonstrated himself to be a ‘yes-man’ for this administration — time and time again — even though President Trump barely won this area” and hitting him on a host of other issues.

“We've also been hearing from voters that they don’t think Diaz-Balart has done enough to protect immigrant communities, DREAMERS, or promote the needs of hard-working families,” Miller insisted. “One thing we've heard the most anger about though is his many attempts to take away people’s health-care. The district can do better than Mario.”

Diaz-Balart has also backed the Trump administration on other matters. Earlier in the year Diaz-Balart cheered Trump ordering the Justice Department to crack down on bump stocks.

“The executive action to ban bump stocks is a welcome announcement,” Diaz-Balart said in February. “Back in October, I joined my congressional colleagues in calling for the Bureau of Alcohol, Tobacco, Firearms, and Explosives (ATF) to re-evaluate bump stocks and similar mechanisms, which were approved by the bureau during the Obama administration. This is an important step and we must look at other measures to stop violent acts like those in Las Vegas, or more recently in South Florida.”

Diaz-Balart could also play a major role in guiding the Trump administration’s infrastructure bill on Capitol Hill if it gets revived. The South Florida Republican chairs the House Transportation, Housing and Urban Development Appropriations Subcommittee which gives him a seat at the table as the White House and Congress look at infrastructure.

What does Uncle Fidel Castro

Permalink Submitted by Ocean Joe on June 5, 2018 - 9:01am
What does Uncle Fidel Castro think of his right wing nephew?

Permalink Submitted by Ana Gomez-Mallada on June 4, 2018 - 2:52pm
Trump hatred and secondary blindness appear to be rampant. It in no way diminishes the fact that Trump has done wonders for the economy, is addressing issues like immigration from the point if of that which is best for Americans (hence. America First), is making unprecedented inroads into North Korea’s dangerous nuclear ambitions and average AMERICANS are very pleased with him. The Mueller investigation is winding down and as Deputy Attorney Rosenstein (supervising the Specual Counsel Mueller) said last month, Trump is not even a target of the investigation. S It Mario Diaz-Balart approves of and supports the President, he is with the majority of AMERUCANS. Kudos!

At this point, any politician

Permalink Submitted by IKIA on June 4, 2018 - 10:57am
At this point, any politician, at any level, who continues to support Trump, is a nincompoop (and a clear and present danger in terms of the effective governance of this country).

But maybe she's read a

Permalink Submitted by Ocean Joe on June 5, 2018 - 9:06am
But maybe she's read a history book. I voted for Trump, but not again. His hero must be Goebbels - tell the lie and repeat it often enough that people believe it. When the giant tax cut (for the rich) and the giant escalation of the deficit come home to roost you will have to figure out how to blame this on the Kenyan guy. Wake up. This wont end well.

beginning of the end for

Permalink Submitted by Huh? on June 4, 2018 - 10:29am
45 had 4 of his campaign team indicted so far and his own attorney indicated their is a strong case for obstruction. The only place this *** clown's picture is likely to end up is on mug shots. Never in history has a sitting president had to lawyer up as much as this fool... Worse yet, the wingnuts would rather die than admit they made a mistake voting for this train wreck... hate to say it, but no one with any sense is surprised...

GOOD FOR HIM! He deserves

Permalink Submitted by Tampaguy on June 4, 2018 - 10:29am
GOOD FOR HIM! He deserves recognition for 'knowing the constitution and amendments' - south Florida people are the Rich and Controlling New York retirees along with the misfit youth... or might we say "Millennials"?

Permalink Submitted by JD on June 4, 2018 - 8:06am
I predict Nobel peace prize will be given to a “group“ to avoid any opportunity to praise Donald Trump for yet another victory. Hillary lost. Get over it

Permalink Submitted by IKIA on June 4, 2018 - 11:10am
Trump's personal incompetencies and shortcomings as president have nothing to do with Hillary losing. He's an ineffectual embarrassment completely in his own right and Hillary Clinton and the Democrats have absolutely NOTHING to do with that!

Permalink Submitted by RICHARD RIKER on June 4, 2018 - 3:43pm
Largest TAX CUT in history Unemployment at 3.9 Korean War is over Isis is obliterated Trillions coming back to America Dramatic deregulation Record low Black unemployment What exactly are you calling ineffectual?

Permalink Submitted by Harry on June 4, 2018 - 7:35am
The way it's going,Trumps likeness might end up on Mt. Rushmore. Why do Democrats hate America?

If that ever happens, the

Permalink Submitted by Ocean Joe on June 5, 2018 - 9:15am
If that ever happens, the other faces will chisel themselves off!

More likely as a mugshot

Permalink Submitted by IKIA on June 4, 2018 - 11:00am
More likely as a mugshot somewhere after being charged with obstruction of justice ... at the very least!

The Progressives ONLY hate

Permalink Submitted by C Breeze on June 4, 2018 - 8:07am
The Progressives ONLY hate America when they can't control it and aren't allowed to be 'in charge' of it (and THAT only happens after a couple decades of "progressive rule" where they "screw up" the ENTIRE SYSTEM;.....and they STILL "don't get it) ! ! !

This is precisely why

Permalink Submitted by BocaBoomer on June 4, 2018 - 6:30am
This is precisely why Democrats have zero credibility with the electorate. Despite bashing and resisting everything Trump tries to do, yet he succeeds anyway. Put these tax and spenders back in power? Are you kidding me? And I'm an Independent that is for more money in my pocket, an improving economy, solid GDP growth and a refreshing level of optimism not seen since the Reagan years. Yes, "The Donald' is making America great again despite the naysayers.

Permalink Submitted by IKIA on June 4, 2018 - 11:05am
Just so you know ... the Democrats did receive some 3,000,000 more votes than the Republicans did in the last presidential election. Therefore, your "zero credibility with the electorate" comment sounds just like a typical Trump blowhardism!

Trump is the key to victory

Permalink Submitted by RepublicanConscience on June 4, 2018 - 6:27am
Trump is the key to victory in most areas where sane, intelligent, clear thinking people vote.