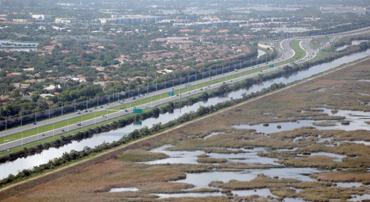 With the rainy season in full effect, SFWMD -- largest of the state's water management districts -- has been busy inspecting and maintaining its 2,000 miles of protective levees.

"Our levees are an integral part of our flood protection system," said SFWMD Chief Engineer John Mitnik. "I am proud to assure residents as we head into the hurricane season that our levees, after having undergone rigorous inspections, are prepared  to ensure the safety of all South Floridians."

SFWMD operates and maintains the regional water management system known as the Central and Southern Florida Project, which was authorized by Congress more than 60 years ago to protect residents and businesses from floods and droughts.

These crucial levees include those built by SFWMD as well as the ones built by the U.S. Army Corps of Engineers (USACE) and later transferred to SFWMD to operate and maintain.

SFWMD routinely inspects its levees to ensure their structural integrity and ability to provide flood protection. Many of the highest-priority levees in the system have had refurbishment work performed to keep them in optimum condition.

The District says an example of the safety inspection protocols and how well SFWMD's levees perform was evident last summer when heavy rains filled up the water conservation areas. Their eastern containment feature is the East Coast Protective Levee that separates the conservation areas from residents of western Palm Beach, Broward and Miami-Dade counties. SFWMD inspectors continually inspected this stretch of levee during those months of high water and found no deficiencies or problem areas.

In 2014 and 2015, SFWMD invested nearly $30 million upgrading approximately 71 miles of the East Coast Protective Levee that protects millions of residents in Broward and Palm Beach counties.

The upgrades meet all FEMA standards and SFWMD certified the levee to FEMA as being able to withstand a 100-year storm event, which helped avoid potential increases in flood insurance costs for residents living in the levee floodplain. These efforts complement other works in Miami-Dade County, where the District is in the process of raising the banks of the C-4 Canal, improving flood protection for approximately half a million residents.

Thank you for writing this

Permalink Submitted by Louis on May 31, 2018 - 8:32am
Thank you for writing this article. I had no idea of the magnitude of the levee and berm system of 2000 Miles. After hearing about other states levees failing; it’s reassuring to know SFWMD has routine inspections. I also learn SFWMD has built levees. My previous knowledge was that US Army Corp Of Engineers were responsible for all construction of levees. Comforting to know we have Leaders like Chief Engineers John Mitnik focused on Hurricane Readiness. Great and timely article. Thank you for the information and insight.

Permalink Submitted by C Breeze on May 31, 2018 - 7:14am
PSHAW!!!!... ""prognosticators are a "dime a dozen",... especially those in some faction of the "weather watching" business; Why else could they consistently "gamble" our lives "on their self-serving lies"?!?

Ever heard of the "Johnstown,