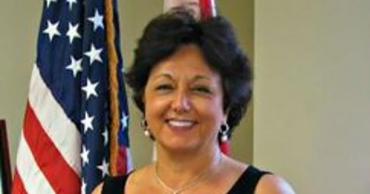 The Florida Chamber of Commerce has named Sen. Kathleen Passidomo, R-Naples, the 2018 Most Valuable Legislator (MVL), for her commitment to securing Florida’s future. The announcement and presentation of the MVL was made during the Florida Chamber’s Board of Directors Thursday morning meeting taking place in Palm Bay.

The Florida Chamber’s Most Valuable Legislator award is the business community’s premier legislative award honoring a single lawmaker for his or her outstanding legislative leadership and willingness to take a stand for free enterprise.

“Early during the 2018 legislative process, the Florida Chamber encouraged lawmakers to lower the cost of living, lower the cost of doing business and move Florida forward by putting long-solutions ahead of short-term politics,” said Mark Wilson, president and CEO of the Chamber. “The Florida Chamber applauds Senator Kathleen Passidomo for her hard work and leadership on behalf of Florida’s families and businesses.”

A small-business woman, Sen. Passidomo has long been a fearless and effective partner in the Florida Chamber’s fight for free enterprise, says the Chamber in its press statement. As the torch bearer of multiple Florida Chamber-backed priorities this session, she attracted bipartisan support for pro-jobs legislation, took well-funded special interests head-on for Florida’s future job creators, and successfully sought to keep Florida’s dismal, bottom-five legal climate from getting worse. Florida needs more public servants who wake up every day thinking about how to make Florida more competitive—regardless of the opponent or political consequences.

“I am truly humbled to be recognized by the Florida Chamber of Commerce as their 2018 Most Valuable Legislator,” said Passidomo in accepting the award. “It is an incredible honor to receive this prestigious award. Legislative change doesn’t just happen overnight. It takes hard work, perseverance and collaborative effort. Working together with the Florida Chamber team, we have been able to advance policies that will have a lasting positive effect on Florida’s families and our business community.”

Also Thursday morning, the Florida Chamber released its annual publication How They Voted -- which provides the grades for all 155 legislators so business leaders can see who voted for or against job creation and economic growth.

The laws that you are

Permalink Submitted by 20th Circuit Fraud on May 30, 2018 - 2:32pm
The laws that you are legislating are only serving your purpose and those who financially support you Passidomo, not the Floridians that are victimized by your changes in state law.

Instead of taking a stand for

Permalink Submitted by Anonymous on May 30, 2018 - 12:37pm
Instead of taking a stand for "free enterprise" which for you only amounts to participation in the most massive fraud that the world has ever known right here in Florida (and not surprisingly is the Nation's leader), you should have taken this opportunity to help the weak and impoverished. This, you completely ignore, and quite honestly, for me also being a Republican, I think you should be ashamed of yourself representing this party and I can't fathom how any other true Republican would want to have anything to do with you unless they too were involved with these crimes of fraud you've committed on the people of Florida.

Instead of taking a stand for

Permalink Submitted by Anonymous on May 30, 2018 - 12:37pm
Instead of taking a stand for "free enterprise" which for you only amounts to participation in the most massive fraud that the world has ever known right here in Florida (and not surprisingly is the Nation's leader), you should have taken this opportunity to help the weak and impoverished. This, you completely ignore, and quite honestly, for me also being a Republican, I think you should be ashamed of yourself representing this party and I can't fathom how any other true Republican would want to have anything to do with you unless they too were involved with these crimes of fraud you've committed on the people of Florida.

Kathleen Passadomo is a fraud

Permalink Submitted by 20th circuit co... on May 30, 2018 - 11:54am
Kathleen Passadomo is a fraud she’s done nothing to help her own constituents concerning Guardianship and the fraud and corruption that’s going on in her district she talks a good game but she doesn’t play one. I’ve called her office numerous times after my father was kidnapped and put into an emergency guardianship at no fault of his own Miss Passadomo never responded never reached out my father’s only crime is growing old ,living in Collier County and having an estate worth over $1 million. Naples Florida Relies on tourism and retirees to support their economy after what’s happened to my family and many many many other families it’s my duty to warn others about the corruption in the guardianship and probate courts in this county it can happen to you in the blink of an eye

This article posted the very

Permalink Submitted by Victim on May 30, 2018 - 2:53am
This article posted the very same day the notice of publication was placed in the paper by the the first round of victims who are suing Senator Kathleen Passidomo, the court, and the state of FL. There will be reports coming out regarding just how severe the Fraud and Abuse in the Guardianship and Probate Division in Collier County.

Permalink Submitted by C Breez on April 13, 2018 - 7:48am
Chambers of Commerce (like "Bar Associations") all over this country, regularly present self-serving annual "awards & plaques" to their members to display on their office walls to impress...EXACTLY WHO?!?!? (WHY OTHER "members" of those "very same organizations", of course !) [Aren't purposfull, self-serving pseudo-"brotherhoods" a 'bit much', you ask? Kinda like "weather forecastors".. always there, but impossible to be held to higher standards..]

It seems I see YOUR negative

Permalink Submitted by Tampaguy on April 15, 2018 - 12:47pm
It seems I see YOUR negative comments on quite a few issues - makes it quite obvious that you are a sour & bitter Leftist.

Tampa Guy, I think this

Permalink Submitted by Victim on May 30, 2018 - 9:48pm
Tampa Guy, I think this "leftist" makes a good point actually. John Passidomo, Kathleen Passidomo's husband is the director of the Collier County Chamber of Commerce, and the Greater Naples Chamber of Commerce. It is one of his 46 companies listed on Sunbiz, but I am sure Mr Passidomo is very proud of his wife, because she own 96 companies, twice as many as he does. The elite don't have to earn awards when they have that much money, if you own 138 companies you can easily just pay for your own awards, all while your victims struggle meeting their most basic needs all because you have robbed them blind.. As you can see Being in the estate business is very lucrative in the city of Naples.. Definition of valuable. 1 a : having monetary value.... Chamber and Mr Passidomo you got it right.. Sad.

Permalink Submitted by Dawn Koncikowsk... on April 12, 2018 - 11:33pm
I would like to congratulate Senator Passidomo in the recognition she received from the Florida Chamber of Commerce. I would like to personally thank Senator Passidomo for her support for the bi-partisan HB 631 with Representative Edwards from Miami. This bill, that protects private property rights as our State and Federal Constitutions require was overdue. The Bill is getting coverage by the media, that is misleading. The media is making it out to be a bill that is taking something away from the public. In reality, it is a bill that not only protects the publics access to the portion of the beach seaward of the mean high water line, but a bill that also protects private property rights of the property owner. Both the public access to the State Sovereign land and the back yards of beachfront property owners are protected under our State and Federal Constitutions. Everyone who owns property in Florida, whether on a beach or in a subdivision or in a gated community, expect their representatives to protect all of the private property rights for all Florida residents, not just for some of them. That is why HB 631 was supported by both parties and passed overwhelmingly and signed by Governor without hesitation. Thank you Senator Passidomo and congratulations.

Permalink Submitted by Victim on May 30, 2018 - 10:31pm
Dawn I see that you own beachfront property so it is going to be hard for you to understand why some might take issue with this bill. Passidomo is only a friend of the rich and the powerful, she has never and will never be a friend to the poor. Passidomo passed a bill which sped up foreclosures and many lost their homes. She became the spokesperson for estate theft and guardianship abuse but more estates have been stolen in her district that anywhere else in FL, and she literally shows contempt to the victims.. The state of FL is in a state of emergency.. We are number one for medicare, medicaid, and SNAP fraud. We had the richest senators on record and you want to know who is fronting the bill for that, the poor. The low income workers in this state don't qualify for medicaid.. Its actually disgusting to think that sick low income Floridians have no access to healthcare and the elite are focusing on ridiculous bills like this.. Does this describe Naples and FL; ELITISM - the belief that a society or system should be led by an elite.... How did the people let the elite take control? Its time to wake up, before they take everything... Oh wait they already have..

What kind of future, Florida?

Permalink Submitted by Robert Warner on April 12, 2018 - 3:27pm
What kind of future, Florida? This is what our upcoming election is all about. Naples is not Florida.

Permalink Submitted by Tampaguy on April 15, 2018 - 12:48pm
Pay attention to Florida news and you will KNOW. Ignorance thrives in every city, not just Naples.

I BELIEVE AS FLORIDIANS AND

Permalink Submitted by ORC on April 12, 2018 - 10:38am
I BELIEVE AS FLORIDIANS AND FUTURE FLORIDIANS THAT FLORIDA SHOULD TAKE THE LEAD IN EVERYTHING, WE SHOULD NEVER SETTLE FOR SECOND BEST, OR LET THINGS GO TO HELL IN A HAND BASKET, LIKE SOME PLACES DO. FLORIDA SHOULD SPARKEL THROUGHOUT THE NATION, AND KICK SOME PLACES IN THEIR REAR ENDS, AND TELL THEM TO STRAIGHTEN UP AND FLY RIGHT. TAKE THIS ANYWAY YOU WANT, BUT THERE IS NO REASON FOR DECAY, UNLESS THE DEMOGRAPHICS ALLOW THIS. BEST WISHES TO THIS LADY AND MAY FLORIDA STAY PRISTINE.

ORC many of us are in hell

Permalink Submitted by Victim on May 30, 2018 - 10:50pm
ORC many of us are in hell because of this woman, nothing sparkles anymore, but this ladies castles stand on pillars of salt and pillars of sand... And one of these days the seas will no longer rise when she gives the word. Only then will we return from exile.. "Seas would rise when I gave the word Now in the morning, I sleep alone Sweep the streets I used to own I used to roll the dice Feel the fear in my enemy's eyes Listen as the crowd would sing Now the old king is dead! Long live the king! One minute I held the key Next the walls were closed on me And I discovered that my castles stand Upon pillars of salt and pillars of sand"