EMILY's List sure has strange ways of deciding when and where it wants to jump into other people’s business.

Nowhere to be found.

It offered NO help and no support to Nan Rich. None. Zip. Zero. I wrote about EL’s lack of support for Rich back then.

Fast forward to 2018. Gwen Graham, the self-described, “very conservative Democrat,” runs for governor, at the time only against Andrew Gillum.

EMILY’s List is all over her like a fat kid eating cake. It even exaggerates her credentials and calls her PROGRESSIVE.

"Progressive" in what bizarro universe?

Then. THEN! EMILY’s List decides to weigh in on “skankgate”.

This pro-women’s organization had the audacity to think it can tell a MAN to tell ME, another woman, what to do.

The fact that EMILY’s List went to a man, to tell me what to do, rather than come to ME to get told to jump off a bridge directly, is disrespectful! LOL!

Now, when EMILY’s List made its “request,” its PR machine sent out a press release.

It was actually kind of cute, because they put my name in it, talked about Collective PAC, and talked about what shouldn’t be allowed, etc., etc.

Where is their press release concerning Gwen Graham being open to a PRO-LIFE running mate?

Being pro-choice is what “Early Money Is Like Yeast” is supposed to be about, right? 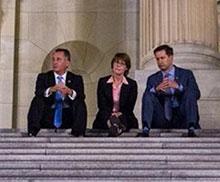 EMILY’s List has been silent on this issue. So silent, you can hear a mouse pee on cotton IN CHURCH!

I don’t care that Graham has now walked back her comments. She was RECORDED saying David Jolly fit her criteria as a running mate.

She gushed about him more-so than anyone else, going on to brag about him having a picture of her as his twitter header!

I took a look. It’s still there! (I wonder how long it will be before she asks him to take it down.)

I hope he doesn’t take it down -- after all, SHE walked back HER comments and flip-flopped. He didn’t.

It will be a reminder of Graham’s duplicity AND the fact that EMILY’s List isn’t the progressive, pro-choice, pro-women, pro-BLACK women organization it lies and says it is.

No matter the couple of bones it throws every now and again.

Leslie Wimes, a Sunshine State News columnist, is founder and president of Women on the Move and the Democratic African American Women Caucus, www.daawc.com. Follow Leslie on Twitter: @womenonthemove1

Will the Real Gwen Graham Please Stand Up?

Shame on you, Leslie! I'm

Permalink Submitted by Jan on May 25, 2018 - 12:56am
Shame on you, Leslie! I'm sick and tired of your baseless attacks against Gwen Graham's campaign. I'm a moderate Dem, but I would never support your candidate Andrew Gillum. I will stay home first, as will my husband before voting for him!

How ironic? calling out Emily

Permalink Submitted by what? on May 17, 2018 - 10:31am
How ironic? calling out Emily's list for someone other than the candidate you support... sort of like how you only seem to have a problem with non-black candidates. Now, if that ain't the pot calling the kettle "black". Tell the truth, shame the devil...

Permalink Submitted by John on May 16, 2018 - 4:48pm
Wimes you ain't worth $ .67 an hour . That's why the Koch brothers don't pay you more to spread your lies about your buddy and favorite far-left liberal liberal Gilliam to try and make him look good to the liberal identity voters .

And yet you keep reading her

Nice article. I love to

Permalink Submitted by RGB on May 16, 2018 - 4:00pm
Nice article. I love to watch and read about the comedy which we call Florida politics.

If you keep on trying to make

YOU are the one making her

Permalink Submitted by Anonymous on May 17, 2018 - 8:40am
YOU are the one making her relevant by reading her columns and responding, or haven’t you figured that out yet, genius? As soon as she says roll over Fido, there you are, rolling over and salivating, just like Pavlov’s dog!! What an idiot!!!

Sorry but the Democratic

Permalink Submitted by Robert on May 17, 2018 - 7:47am
Sorry but the Democratic Socialist party owns the KKK, just like you own the domestic terrorist organization antifa. Your lack of historical knowledge is showing!

Oh my they're attacking the

Permalink Submitted by Charlotte Greenbarg on May 16, 2018 - 2:37pm
Oh my they're attacking the messenger! Progressives' far left classic garbage and hypocrisy. Love it, keep up the good work, Leslie. By the way, is Emily's List now PINO?

Some of us "messengers" are

Permalink Submitted by Robert Warner on May 16, 2018 - 4:24pm
Some of us "messengers" are registered GOP voters.

Permalink Submitted by Robert Warner on May 16, 2018 - 1:50pm
Leslie - You sound more like Breitbart and Steve Bannon every day.

Permalink Submitted by Great Floridian on May 16, 2018 - 2:07pm
Right? It's as if she's hoping to get noticed and work for Steve or Fox and Friends. Heck, she and Matt Gaetz could have their own show together on Fox.

Why? Because she thinks for

Permalink Submitted by Anonymous on May 16, 2018 - 1:56pm
Why? Because she thinks for herself and doesn’t do what you eat her to do?