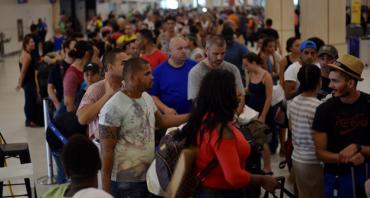 New data has come in to measure in certifiable amounts how many Puerto Rican residents have fled the nation in recent months.

Following the devastation left behind from hurricane Irma last September, speculation swirled over how many of the island residents would be transplanting to the U.S. mainland, and specifically how many would become established in Florida.

With the level of destruction to the infrastructure, it was a given that an outward-moving wave of PR residents would take place. Over the past five years alone, the number of people fleeing the island nation’s debt crisis has been estimated in the range of 200,000. Following Irma’s rampant and varied damage estimates, expectations were that Florida could end up accepting between 50,000, and 100,000 new arrivals. But these were speculative numbers.

Now a private firm has come out with measurable totals, based on cell phone data taken from August 2017 through this past February. Teralytics, a New York tech company, has partnered with one major cell phone provider to measure the travel of 500,000 smartphones, using the data to map the travels of residents from Puerto Rico. This establishes a defined track, as well as establish how many have returned, versus those becoming permanent residents.

The numbers reveal stark changes are sure to be ahead. Puerto Rico has seen an amazing 6 percent of its population flee to become mainland residents since the storm. Florida has been the overwhelming choice for new settlers -- 43 percent of those relocating have arrived here, compared to the second-favorite location, New  York City, at just 9 percent. Florida alone has taken in over 150,000 new Puerto Ricans in that time.

The bulk of those arrivals have settled in the central portion of the state. More than 80,000 were measured to have taken residence in Orange, Osceola, Hillsborough, and Polk counties. Dade and Broward combine for an additional 25,000 new arrivals. How the state deals with this influx will be an ongoing challenge for the years ahead.

One of the concerns is how this may alter the voting landscape within the state. Puerto Ricans have long been a traditional-leaning demographic. In the last presidential primary, 58,000 voted Democratic 37,000 Republican. But in deeper analysis, it may not be an automatic gain for Dems.

Two factors could tamp down the party-line impact. Many of those counties with the largest influx are already traditional Democratic strongholds. The tendency to flip offices may not fully materialize. Additionally, a fair number of Puerto Ricans have shown a tendency in recent years to move to an independent position following their move.

The reasons for that are unclear (seeing their government and economy struggle in recent years under Democrat rule may be one influence), but the net gain is still in question. Note how those moving here in the years prior to the storm have not altered the political landscape in demonstrable fashion. Republicans are still in power in Tallahassee, and the prior influx did not prevent Donald Trump from taking Florida in the general election. That independent tendency of new voters can be seen as an opportunity to court a new voting block by State GOP leadership.