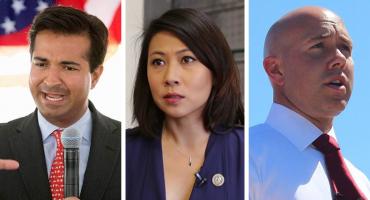 From her perch on the U.S. House Armed Services Committee, U.S. Rep. Stephanie Murphy, D-Fla., was able to bring a number of proposals she and other members of the Florida delegation championed into the Fiscal Year 2019 National Defense Authorization Act (NDAA).

Murphy weighed in on Thursday after the NDAA cleared the committee.

“The United States has the most powerful military in the world, made up of brave Americans who risk their lives to defend liberty and protect this nation.  As someone who used to work in the Pentagon, I know how important it is that our men and women in uniform have the resources they need to safely and effectively do their jobs,” said Murphy. “I’ve worked hard on the Armed Services Committee to ensure this bill supports our troops and veterans; combats emerging threats like cyber; and strengthens Orlando’s modeling, simulation, and training sector—all as part of a bipartisan effort to keep our country safe.”

The NDAA includes a proposal from Murphy and U.S. Rep. Carlos Curbelo, R-Fla., to help active duty personnel leaving the military enter the civilian workforce. Back in February, Curbelo and Murphy unveiled the “Better Access to Technical Training, Learning, and Entrepreneurship (BATTLE) for Servicemembers Act” which, they insist, “will better prepare departing servicemembers to attend college, learn a technical trade, or start a small business.” Murphy is the chief sponsor while Curbelo is cosponsoring the legislation.

As part of the Transition Assistance Program (TAP) currently offered by the Defense Department, servicemembers moving into the civilian workforce can take two day workshops on higher education, skills training and entrepreneurship offered by various branches of the federal government. However, according to the Government Accountability Office (GAO), less than 15 percent of eligible servicemembers took part in the workshops in Fiscal Year 2016. Curbelo’s and Murphy’s proposal would make departing servicemembers participate in the workshops though they will be able to opt out of it if they so choose.  The NDAA has the core of Curbelo’s and Murphy’s proposal in it.

“As a nation, it’s our responsibility to help our servicemembers succeed, whether on the battlefield or in the workforce,” said Murphy when she brought out the bill. “America’s armed forces produce some of the most talented, well-trained, and tenacious individuals in the world, but too many of these warriors struggle to transition to civilian life. I’m proud to introduce bipartisan legislation to better prepare our servicemembers to succeed in whatever civilian career they pursue following their military service.”

“We owe it to our servicemembers, and their families, to better help them transition back to the civilian job market,” Curbelo said when the bill was launched. “We have a variety of programs available, though too many of these brave men and women are not aware they exist.  While much work must still be done to help ensure they have successful and productive post-military careers, this legislation is a positive step forward in achieving those goals.”

The NDAA also contained much of the  “Deterring and Defeating Rocket and Missile Threats to Israel Act” which Murphy brought out in February with U.S. Rep. Brian Mast, R-Fla., as a cosponsor. The bill would allow additional funds outside the current $500 million a year to Israel to defend itself against missile attacks. Murphy and Mast both noted that their would show the current $500 million a year is not a ceiling and the U.S. could send additional funds under exceptional circumstances. Back in 2016, the U.S. and Israel entered into a memorandum of understanding (MOU) indicating the U.S. would send more funds to Israel if needed for missile defense but Murphy’s bill would codify the agreement into law.

Both Murphy and Mast made the case for the bill back in February.

“When I traveled to Israel last summer, I experienced firsthand how truly special the U.S.-Israeli relationship is and gained a clear understanding of the threats Israel faces on multiple fronts,” said Murphy when she introduced the bill. “The United States has an unbreakable bond with Israel, built on shared values and shared interests. We must stand strong against those who threaten the security of our two nations. I’m proud to introduce this bipartisan bill with Congressman Mast to not only deter conflict and preserve peace, but to also ensure Israel prevails if its adversaries choose war.”

“Following my time in the Army, I chose to volunteer alongside the Israeli Defense Forces because our countries share the common ideals of freedom, democracy and mutual respect for all people,” said Mast. “There is undoubtedly a mutual benefit to the security of our nations in collaborating on missile defense. This bipartisan legislation makes a strong statement that we will always work with Israel to promote peace and global security.”

The NDAA also contains language from Murphy’s “Microloan Modernization Act which allows entrepreneurs more access to low-interest loans up to $50,000 and her proposal to send $20 million to the National Guard Bureau to combat opioids.

NRCC, DCCC Get Ready for Congressional Elections Across Florida

More money to add to the

A simple "Thank you" to our

Permalink Submitted by C Breeze on May 11, 2018 - 10:35am
A simple "Thank you" to our veterans has ALWAYS been sufficient recognition in their eyes; They are more than willing and able to secure their own 'futures'. Restructuring and restoring the credibility of the "Veterans Administration" (without the "lack of care empty promises", and "dipping fingers of politicians") would be the "cherry on that cake" of "Veteran expectations"... These Veterans have always been the strongest of our populace, and are the "Sheepdogs" that will forever (individually and\or collectively) continue to protect that populace "at home" under any and all circumstances.

Permalink Submitted by ORC on May 11, 2018 - 9:37am
HEAR YE!!! HEAR YE!!! HEAR YE!!! ALL FLORIDIANS AND VOTERS BE ON CONSTANT GUARD AND ALERT, DO NOT FORGET RELATIVES, FRIENDS, AND ASSOCIATES. FLORIDA MUST BE OURS AND OURS ALONE, DO NOT ACCEPT PREDATORS AND TRESPASSERS, AND STAND YOUR GROUND ON ANY WICKEDNESS AND CORRUPTION: https://nworeport.me/2018/05/10/soros-assault-on-fla-election-continues/

And yet none of these Israeli

Permalink Submitted by Andrew Nappi on May 11, 2018 - 8:02am
And yet none of these Israeli patriots addressed the arrest and indefinite detention of Americans in this bill, or the wide discretion the govt clsims as to the definition of a terrorist.