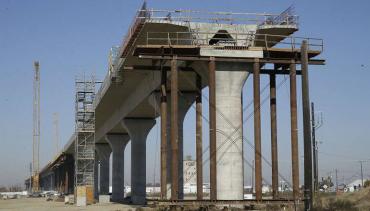 Congressmen assessing All Aboard Florida and Brightline in Florida might want to keep their eyes on California's deeply troubled high-speed rail project in California.

The U.S. government has initiated an audit of California’s over-budget, behind-schedule bullet train as costs continue to climb.

Since 2009, Congress has appropriated more than $10 billion for high-speed intercity passenger rail, with $8.6 billion disbursed as of the end of 2017. Almost 39 percent of that money has been dedicated to the California high-speed rail project.

The inspector general's audit will examine the Federal Railroad Administration's oversight of nearly $3.5 billion in federal grant money awarded to the project.

Scovel is charged with providing “independent and objective reviews of the efficiency and effectiveness of Department of Transportation operations and programs.”

The idea of the passenger service originally was to transport travelers between Los Angeles and San Francisco in less than three hours.

A business plan released in March shows the state does not have the roughly $30 billion it needs to complete the first phase of the project between the Central Valley and San Francisco. The entire project, meanwhile, is expected to cost $77 billion. State auditors are also conducting a review.

Meanwhile in Florida, though All Aboard Florida/Brightline's Miami-to-Orlando high-speed rail project isn't entirely similar to California's, Brightline President Patrick Goddard and U.S. Department of Transportation official Grover Burthey have had a job trying to show the Florida project is all-private when it's using federal tax-exempt Private Activity Bonds in the construction.

At a hearing in April before the House Subcommittee on Government Operations, Chairman Mark Meadows, a North Carolina Republican -- perhaps with California's project in the back of his mind -- made it clear members believed the Brightline deal should never have been approved.

It's still up in the air whether Brightline will be able 1) to issue the Private Activity Bonds as authorized by the federal Department of Transportation, 2) be forced to abandon the PAB financing try and seek the similarly problematic Railroad Rehabilitation and Improvement Financing, or 3) go for the last resort -- expensive conventional financing to pay for the track upgrades and extension needed.

Permalink Submitted by Richard Webb on May 18, 2018 - 1:29pm
Track improvements were designed to FREIGHT specs, not passenger specs. Bullet train was a ruse to allow the railroad to buy infrastructure from bankruptcy court once the bonds defaulted.

“Construction of a high speed

Permalink Submitted by John Jacobs on May 13, 2018 - 12:49pm
“Construction of a high speed rail system from San Francisco to Los Angeles and Anaheim is certainly an expensive project. But it will cost a fraction of what the state would have to spend to achieve the same level of mobility for a population expected to reach 50 million people by the year 2030. To move an equivalent number of people would cost $170 billion in new freeways and airport runway expansions in the Bay Area and Los Angeles, assuming those projects would have both the necessary public support and environmental clearance. And while others have said we should wait for newer technology, high speed rail is a safe, reliable and cost effective system of transportation, proven around the world.” –San Francisco Examiner

The California HSR project is

Permalink Submitted by Michael on May 10, 2018 - 7:19pm
The California HSR project is an ill-conceived boondoggle. Not so the Brightline which will ultimately mesh two of the world's premiere tourist destinations into a single mega hospitality region. Easier access between Orlando and SOFLA will be a boon to tourism marketers and will encourage visitors to extend time spent in the Sunshine State. I, for one, am tired of Gold Coasters, Gulf Coasters, and Panhandlers bellyaching about a project that will ultimately boost Florida tax coffers therein helping to pay for the infrastructure that sustains their beloved tropical lifestyle.

It's a project that isn't

Permalink Submitted by Tom S. on May 11, 2018 - 2:10am
It's a project that isn't needed or wanted. Tourists that typically want to spend time in Miami aren't the same ones that want to spend time in Orlando. And Miami's nightlife are not the ones that are interested in family vacations with the mouse. And saving an hour or two on the turnpike does not make up for not having your car at either end and having to rent and pay a fortune in train fare. Many people, and I'm one of them believe that the whole thing wasn't about passenger service to begin with, it was about getting somebody else to pay for the track improvements and extension for better and more freight from the Port of Miami now that the Panama Canal's lockd are widened , deepened and lengthened. Now the bright-line trains are running at 20% capacity on the part of the route that would be the most heavily used from downtown to downtown south Florida. The only part of the route where people might take it more than once a year or once a lifetime.

These two projects have

Permalink Submitted by Mary Ellen on May 10, 2018 - 4:29pm
These two projects have nothing to do with each other. The BL project in FL is a PRIVATE venture, top speed 125 mph. The CA Project is a state project running through an earthquake prone area at 225 mph. It has tunnels BL doesn't, it's electric, BL isn't. CA won't be running for at least 10 years and it's a model of the Japanese Shinkansen bullet train system (that also runs in an earthquake zone). BL is already running, expanding to Miami in the next few weeks. The BL system could be compared to Amtrak's NE Corridor connecting cities close together. Amtrak actually makes money on the NEC... about 500 Million a year. It's the other cross country routes that loose money. Comparing Apples to Apples BL has a good shot at making this profitable connecting Miami, Ft. Lauderdale, WPB, Orlando (Tampa and Jacksonville). Short haul, intercity and higher speed. Both the NEC and BL resemble intercity service in Europe, and everyone knows how great that is. BL could add a couple more stations; that doesn't mean all trains are going to stop at them. Just like the NEC some are locals, some are express with limited stops.

Catherine Price is a member

Permalink Submitted by David on May 10, 2018 - 11:31am
Catherine Price is a member of the murderous, immoral Democrat party. Her website almost tries to hid that affiliation. However, her issues are pure ultra liberal garbage.

Can't say I haven't been

Permalink Submitted by C Breeze on May 10, 2018 - 8:47am
Can't say I haven't been telling you so all along...! If California's ever ongoing "Train Project moneypit" doesn't scare the hell out of Florida's Citizen Taxpayers.., then AMTRAK'S disastrous history should ! (NOW, is only someone could build a ONE WAY train to transport loads of "Illegal Alien Invaders" BACK to Mexico, Central & South America...THAT would be a worthy project ! [ Stay tuned "Flori-fornia" !..]

Florida and the rest of the

Permalink Submitted by John Jacobs on May 13, 2018 - 12:55pm
Florida and the rest of the backward South could take a lesson from California and its modern infrastructure. Much of the redneck South has, you guessed it, been voting for redneck politician, which explains its 3rd world status.

There is no story here. The

Permalink Submitted by L M Ramírez on May 10, 2018 - 7:00am
There is no story here. The FTA routinely performs these audits whenever FTA dollars are involved in transit projects. As railroads and the “right of ways”’are regulated at the federal level, these audits of a high-speed rail project in California have little to do with FEC or “Brightline activities in Floirda. It is truly a shame how a few malcontents continue to “grandstand” against a regional rail project that establshes a 21st century linkage to the region’s economic centers. Transit oriented developments are generally good for local economies, and in high demand across the country. Perhaps if there were stops in Stuart or Vero Beach, Treasure Coast leaders might actually support this forward thinking project.

If BL had stops along the

Permalink Submitted by Wendy on May 10, 2018 - 11:58am
If BL had stops along the Treasure Coast, it could no longer bill itself as high-speed. That is why this is a project to benefit S. Florida only.

Permalink Submitted by Charles on May 10, 2018 - 9:02am
Agreed. Your first sentence sums it up nicely. A false comparison; Brightline is actually operationing in S Fl and is a great ride.

Who do you work for? In every

Yeah, plenty of room on those

Permalink Submitted by Tim on May 25, 2018 - 5:22am
6 fatalities so far, massive traffic backups as the trains block major streets. horrible. I live about 10 blocks from it in Lake Worth

Permalink Submitted by Catherine Price on May 10, 2018 - 7:27am
Corruption always follows high dollar projects. Not excusable or good but true. The alternative is continue to sit is seas of high traffic around our major cities in Florida, build more roads and put more cars on the road - a true prescription for ecological, physical and psychological disaster. We need to wake up in Florida and move into the next century. For a choice in Florida Vote for Catherine Price in FL Senate District 26 www.priceflsenate26.com