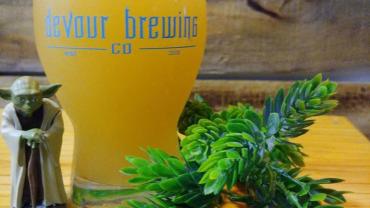 They're not concocting what brewers in Colorado are, but a handful of craft brewers in South Florida are floating what they believe is an exciting new trend -- pot-tasting beer.

A number of beer makers in the region have been working on new formulas involving an extract from marijuana plants. They figure, maybe it's illegal to sell edibles, but nobody said anything about potables that contain neither no inebriating or medicinal properties.

The marijuana taste is the thing, they say.

But last week, government officials stepped in to harsh their brews.

Owners at Invasive Species Brewing in Fort Lauderdale, as well as Devour Brewing in Boynton Beach, received cease-and-desist letters from the federal Alcohol and Tobacco Tax and Trade offices. The breweries were told they could not sell their latest variants, which were made using cannabis terpenes oil. Even though this element contains none of the mood altering components from the plant -- specifically tetrahydrocannabinol, or THC -- government officials clamped down on the new product.

Terpenes oil is what gives the product its distinctive, pungent aroma, but it lacks any of the recreational or medicinal properties from the plant. Instead, South Florida brewers are finding the oil delivers new flavor profiles for their products and have been making numerous styles to appeal to customers looking for the flavor of marijuana. Most of the batches were begun during the holiday season, in the expectation of having the beer ready for celebrations last week.

In Colorado, where medicinal and recreational cannabis are already legal, Keith Villa, the inventor of popular Blue Moon beer, has just developed a craft beer that gets you high. Villa isn't using CBD oils, which have a relaxing but buzz-free effect, to brew his beer -- he says that's been done before. He's going full THC, meaning his brews will give you the same effect as marijuana.

In South Florida, Invasive and Devour's cannabis beers are all flavor, no psychoactive chemical compounds.

“If (they were anything but harmless), I wouldn’t be talking to you over the phone right now. I’d be in jail,” Devour co-owner Chip Breighner told a SouthFlorida.com reporter. “It’s superstrong, has a pungent flavor, and it smells and tastes just like the real thing.”

But it’s not the real thing, Breighner adds. Early test batches of Apricot Haze and Florida Thunder, which he released in mid-November, drew positive reactions and sold out “within days,” he says.

The feds didn't see it that way.

Brewers say the primary reason the agency blocked sale of the product is because the law stipulates the beers need to be successfully submitted for formula approval first. Tests must be conducted because the terpenes derives from a controlled substance, and the product needs to be verified that it does not contain THC.

Arrival of the letters had the breweries wrestling with solutions. Both locations had events planned for Friday, April 20 and announcements had gone out about the new-product roll-out celebrants could expect. Devour Brewing was contemplating a cancellation, but in the end, the show went on. Only, no beer with terpenes oil was tapped that night.

The head brewer for Invasive said he was instructed not to make any more of the beer (the letter stated they had to “stop production”). Both breweries have applied for formula approval.

One other area brewer, Lauder Ale, has a line of cannabis-infused labels but had escaped the eye of the feds. They had not received any of the letters demanding a halt to production by Friday. Those who attended the brewery's Friday celebration were offered four different beers crafted with the elemental oils.

First of all, it's time the

Permalink Submitted by BobH on April 24, 2018 - 10:35am
First of all, it's time the Fed stop treating Marijuana as an illegal "drug". It's not. It's actually safer than alcohol, but because they haven't figured out how to make money off it yet, we're going to continue this charade. The Beer has NO THC, thus is not a threat to anyone who doesn't want to drink it.

Permalink Submitted by Tony on April 23, 2018 - 12:05pm
End the Nanny State. Adopt and live personal responsibility, or admit you are a mindless slave and step away to let the grownups talk.

In my experience, the

Permalink Submitted by Anonymous on April 23, 2018 - 2:14pm
In my experience, the mindless masses outnumber the responsible individual 10,000 to 1.

You are probably correct with

Permalink Submitted by Bill on April 23, 2018 - 3:12pm
You are probably correct with your numbers, has it occurred to why that is? Could it be the crappy education system, the mass media entertainment industry, the fast food industry...?

Permalink Submitted by C Breeze on April 23, 2018 - 9:13am
Will non-thinking idiocy NEVER cease?..... (Unlimited marijuana 'choices' for "lazy ne'er do goods", paid for with unlimited 'entitlement monies', just as fast as governments can send it out..) [GET a JOB, so you won't need a "crutch" for EVERY imagined "issue" ! ]

What are you babbling about,

Though beer varietals are

Permalink Submitted by RGB on April 23, 2018 - 8:18am
Though beer varietals are about taste, No to cannabis tasting brew till cannabis or the additive is legal in Florida.

I think it is a dumb idea and

Permalink Submitted by Bill on April 23, 2018 - 8:17am
I think it is a dumb idea and a waste of money. Why waste your money on fake cannabis when the real thing is much better. This explains the rise in health problems with fake marijuana (aka spice). There is a lot going on at the federal level to get cannabis DE-scheduled, because it should never been put on the controlled substance list. A better use of your money is to get cannabis on a constitutional amendment and set Florida for the new laws. I know this is going to ruffle a lot of feathers on those chicken little prohibitionists and the reefer madness crowd, but remember one thing, you do not have to smoke cannabis and you do not have to lock up a person who is using it.