An Outspoken Broward Deputy Dies and It All Goes Quiet; Why? 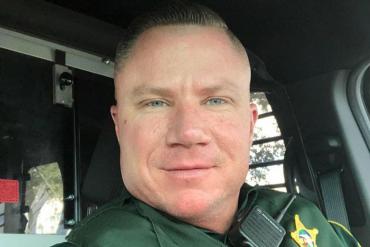 Conspiracy theories have always turned me off, and I'm not posing one now -- but doesn't anyone else want to know what happened to Broward County Sheriff's Deputy Jason Fitzsimons?

Deputy Fitzsimons, 42, described as "in an excellent state of mind and health,"  called in sick sometime April 1 and then died -- his obituary read "unexpectedly." Apparently he was found on his sofa.

That's pretty much the extent of the death report

I called the Sheriff's Office and asked about him, was promised someone would get back to me, but no one ever did.

The rub about Fitzsimons is, his handiwork was all over social media after Feb. 14, questioning the motive behind the Marjory Stoneman Douglas mass shooting. He believed the tragedy was being used to promote the Democratic Party's gun-control agenda, to gain traction in the upcoming election.

On one Facebook posting, he had included Douglas student-spokesman David Hogg Photoshopped to look like an SS officer, complete with the Nazi salute and swastika, above the caption, “We will March Until We Disarm Every American.” I was trying to reach Fitzsimons because I wanted to write a story on why he was challenging impassioned and grieving students so publicly, and frankly because he seemed like quite a character and great story fodder.

The truth is, I didn't find out the deputy died until I came across something called Memory Hole Blog. James Tracy, the site's creator, wondered same as I do now how come "the complete 'news blackout' of this curious and untimely death?"

Fitzsimons’ Facebook page has since been “scrubbed” of his 2018 posts, says Tracy. They're gone. They include the ones calling the Parkland shooting or its aftermath into question.

So, here are the so-far sketchy circumstances surrounding Deputy Fitzsimons’ death: The official cause has been attributed to cancer, yet this is contradicted by his obittree.com obituary, stating he “died unexpectedly.” Funeral homes and loved ones often like the “died unexpectedly” phrase when they are reluctant to disclose the true cause of death, as in the case of a suicide.

Like me, Tracy finds it all very mysterious because Fitzsimons' obituary paints a picture of a spiritual man who cared about the truth and the U.S. Constitution, a happy-go-lucky individual who "lived life to the fullest," loved spending time with his friends and singing Kenny Chesney-style karaoke. 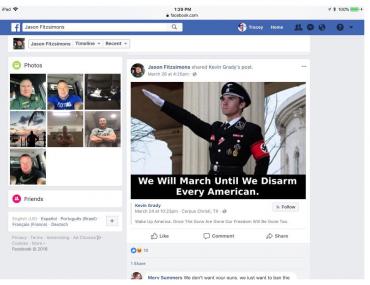 "If Fitzsimons in fact died of cancer, the onset must have been extremely sudden," writes Tracy. "Neither the obituary nor accompanying memorials reference any struggle with the disease, but instead point to his inspiring presence while expressing astonishment at the abruptness of his passing."

Tracy tries to connect the dots citing Sandy Hook events. This is what he reports:

"As Sandy Hook researcher Tony Mead observed in 2014, 'From Douglas Cottle, who died Sept 29, 2012, at age 62 to Michael Bellmore, who died May 3, 2014 at age 27, more questions than answers seem to arise. The Connecticut State Police commander, the Connecticut State Police commissioner, the Western Connecticut state police Commander as well as the Connecticut state medical examiner have all been eliminated from the story either by retiring or death. What better way to cover up any possibility of ever disclosing the truth? What better way to perpetuate conspiracy theories?'

"Those who received word via Twitter of Fitzsimons’ untimely death have expressed similar doubt and suspicion on the vague and unusual circumstances.

"As is suggested in the aftermath of other recent mass shooting events, Fitzsimons simply may have possessed too much information, was at the wrong place at the wrong time, and/or asked sensitive questions of his peers and superiors on the specifics of the Parkland shooting. It is beyond dispute that the sheriff’s deputy had become uncomfortably outspoken on the February 14 event."

As I said, I'm not into conspiracy theories myself, and maybe there's nothing to any of this. But now that Tracy is wondering out loud why there are more questions than answers about Deputy Fitzsimons, certainly somebody in the Broward Sheriff's Office ought to be forthcoming. Perhaps fellow deputies believe they have to preserve his memory or protect his family. Either way, it's unacceptable. Why should we have to submit a public records request to see the death certificate of a public servant?

Basic fact: As long as we don

Permalink Submitted by Chris on July 3, 2018 - 10:18am
Basic fact: As long as we don't know and accept something as a fact of life, we are unable to see them. Same applies to conspiracies. They are NOT just theories as they were branded in the 60's after JFK's assassination. We have been collectively programmed to look away, even when forensic evidence is in front of us. But thanks to online exchange and multiple sources the old programs work no more. The amount is just too huge and our cognitive dissonance breaks down little by little.

Permalink Submitted by duncan mckean on May 19, 2018 - 12:55pm
its called conspiracy analysis not theory .more damage has been done in the cognitive dissonant social engineered demonization of a legitimate word than the crimes themselves ..we live in an information matrix thanks to the warped press who think they own reality .if anyone think conspiracies don't exist then 2+2= pink.what is a premeditated crime?

I love your term "conspiracy

Permalink Submitted by Rachel on May 26, 2018 - 11:31am
I love your term "conspiracy analysis". I'm going to start using that more often.

Nobody ever questions the

Permalink Submitted by Somewhere safe on May 10, 2018 - 3:43pm
Nobody ever questions the weird deaths for some reason. Like the guy who was about to speak out about Hillary who "killed himself" by shooting him self in the back twice. Or the weird deaths of the crowd members from the Vegas shooting who posted different stories about what happened in Vegas and all had weird un explained accidents. One of the victims cars hit a fence on a drive way going slow and the car exploded. That is actually from the news but no one questions why a car going 15 miles an hour hits a gate and explodes? Just a thought

My question about the

Permalink Submitted by karen on May 5, 2018 - 6:02pm
My question about the facebook page you are showing and referring to: If the facebook page, which does have pictures of Jason Fitzsimons, (and it's still there), with the posts you mention. However on that page, he has no friends, and nothing to make it look like a real page, except pictures of him. And they are pictures that are also on his actual page. You know, the one where he has quite a few friends and family members. Here's a link to that page: https://www.facebook.com/jason.fitzsimons.33?lst=701381245%3A100011166036383%3A1525556219 And there is a third page out there, which is probably also a fake page. And there are a lot of families who do not publish the cause of a loved ones death.

Why is this ElNora so hot

Permalink Submitted by Strange Things on April 27, 2018 - 6:14am
Why is this ElNora so hot because people want answers about the strange death of an Officer who was on the scene and involved in the Stonedman Douglas events and then was openly questioning the well orchestrated Democrat political gun grab agenda that was being advanced even the day of the shooting when no one had bothered to determine the specific factors and events that would motivate a kid to retaliate against classmates and teachers. What did they do to Cruz to make him so mad? We need answers, not censorship. What are the hiding?. Who planned all of these people to "happen" to be positioned to all scream to disarm the American public who were not involved, but they are not screaming to have the principle, Superintendent Runcie, and Sheriff Israel removed from office for their failures to intervene.

Permalink Submitted by Tuna f Flesh on May 1, 2018 - 9:26pm
The fake news site Snopes.com claims that yes he died but he did not try to expose the shooting how convenient of it to vanish off of social media. Sorts funded trash. They were both murdered. Retarded shills always say that if false flags happen like Sandy hoax why has not one come forward to whistleblow. Well here is the answer. They end up dead 'unexpectedly' on their sofas.

Do your own research and draw

Permalink Submitted by CyberDad on April 24, 2018 - 3:03pm
Do your own research and draw your own conclusions.

When an article starts with a

Permalink Submitted by Wil on April 24, 2018 - 4:53am
When an article starts with a disclaimer like, "I'm not one to spread conspiracy theories, but..." You know you are in for some grade A bullshit.

So what about the story is

Permalink Submitted by Ma on May 2, 2018 - 3:02pm
So what about the story is bullshit? Do you have proof to the contrary of this story? Please by all means provide the facts, truth and resources you gathered all your truth from. I can wait.

Permalink Submitted by Anonymous on April 27, 2018 - 3:33am
yes yes excellent. best to ignore it im sure

I have watched my family

Permalink Submitted by Singleshot on April 23, 2018 - 6:38pm
I have watched my family members die from this terrible disease. None of them, not one ever looked as healthy as this man. He deserves better!

I have watched my family

Permalink Submitted by Singleshot on April 23, 2018 - 6:37pm
I have watched my family members die from this terrible disease. None of them, not one ever looked as healthy as this man. He deserves better!

Maybe he just got what was

Permalink Submitted by Death is funny,... on April 23, 2018 - 2:43pm
Maybe he just got what was coming to him. I love how people try to make nobodies important. Just another cop who finally became a good cop.

We cannot wait until youre

Well all I can say is what is

Permalink Submitted by donald bodine on April 18, 2018 - 2:24pm
Well all I can say is what is listed in obits, really doesnt make sense if he indeed died of cancer. Cancer can take someone quickly, but not overnight, not without signs of it. If he died of cancer it would have been reported as such. One other note, why so many selfies of himself???? Sure loved his own image.

Permalink Submitted by RN on April 18, 2018 - 9:12pm
Undiagnosed, cancer can take someone unexpectedly. Many forms of cancer can be insidious. I know a young person who had a multiple brain bleeds and died. they were diagnosed with leukemia on autopsy. The leukemia caused the bleeding in the brain.

Permalink Submitted by Just say'n on April 21, 2018 - 8:28am
If's and butts, Isreal's investigative methodology. FYI End stage cancer is painful, and lack of an autopsy, would send up a red flag for a REAL criminal investigator. Person in good physical condition, dies for no apparent reason, and the people most suspect in his death do not perform an autopsy. Only one of Isreal's patronage hires would not think that a bit fishy.

This is untrue. Had a friend

Permalink Submitted by Sven on April 18, 2018 - 7:10pm
This is untrue. Had a friend die literally over night from a VERY aggressive form of cancer.

did the autopsy confirm that?

What type of cancer? Please

Permalink Submitted by Just say'n on April 21, 2018 - 9:46am
What type of cancer? Please at least provide an example of a "possible" yet totally un proven "Theory"

It's interesting how Deputy

Permalink Submitted by Mike on April 17, 2018 - 2:29pm
It's interesting how Deputy Fitzsimon's death has elements that mirror Dr. Timothy Cunningham. They called in sick. They found Jason on his couch and Tim in the river. Both were whistle blowers, apparently.

Just because you receive a

Permalink Submitted by Linda on April 17, 2018 - 1:45pm
Just because you receive a copy from the vital records for a "cancer" death does not necessarily make the death certificate legitimate. Even medical examiners like money.