While other survivors blame lax gun laws for the shooting that claimed 17 lives in a Parkland high school, 15-year-old Anthony Borges finds fault elsewhere and wants his point of view on the record.

The Marjory Stoneman Douglas High School student, badly wounded while saving the lives of classmates, has blamed the Valentine's Day mass shooting on the sheriff and the school district. He says confessed gunman Nikolas Cruz should have been kicked out long before the deadly rampage.

This is a courageous young man. Courageous during Cruz's shooting spree, courageous after it. 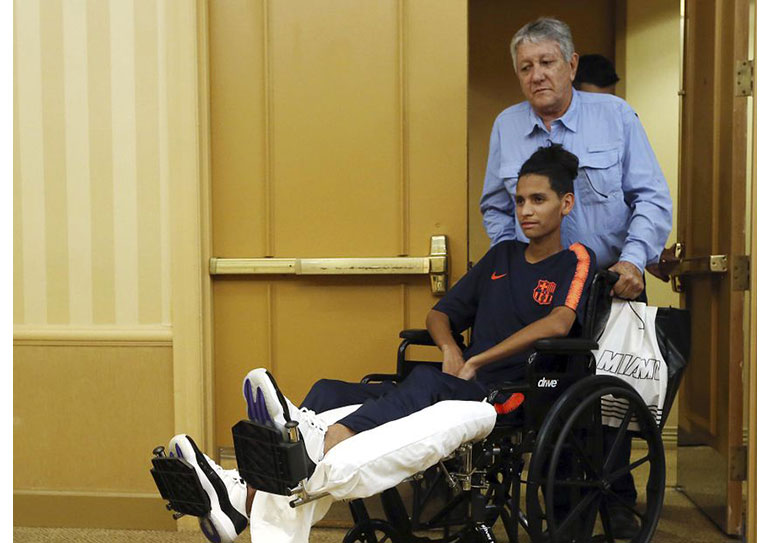 Borges, shot five times as he shielded about 20 students by blocking a doorway, told Broward County Sheriff Scott Israel and Schools Superintendent Robert Runcie in a letter that “both of you failed us students, teachers and parents alike on so many levels.”

“I want to ask you today to please end your policy and agreement that you will not arrest people committing crimes in our schools,” he said in the letter. “I want all of us to move forward to end the environment that allowed people like Nikolas Cruz to fall through the cracks.”

He was talking about the PROMISE program, aimed at keeping disruptive but non-violent students in school through counseling and restorative-justice methods.

The letter was read at a Friday press conference in Plantation by attorney Alex Arreaza as Borges, in his Barcelona Football Club jersey, sat next to him in a wheelchair. The boy is still too weak to talk after being released Wednesday from a Fort Lauderdale hospital seven weeks after the shooting.

The letter as read by Arreaza continued, “You knew (Cruz) was a problem years ago and you did nothing. He should have never been in school with us. I ask you today to make the commitment to protect the students and teachers and provide a safe learning environment.”

How much coverage will a gun-obsessed mainstream media give Borges' plea?

Gun control has dominated everything post-Parkland. As if there are no other issues that define this tragedy. In fact, the push from the left is to ridicule Gov. Rick Scott for putting emphasis on school safety measures instead of just on more gun control -- they call it "political expediency in an election year." The decision by the boy and his family to focus on Broward County’s move away from traditional discipline comes as a marked common-sense departure.

Five years ago Runcie, allied with Obama Education Secretary Arne Duncan, adopted a plan designed to end the “school-to-prison pipeline” by reducing suspensions, expulsions and arrests. That plan was embraced a year later by the Obama administration in its 2014 guidance on school discipline.

Said Arreaza during Friday's press conference, “Nobody’s addressing the problem of that being what created Nikolas Cruz, and that’s what’s frustrating.”

Cruz, 19, has been charged with 17 counts of first-degree murder after freely entering the school unobstructed, after he was so coddled through his high school years he couldn't even legally be kept from buying a firearm.

Though there are protests seeking Sheriff Israel's resignation, there are no marches demanding answers from local authorities.

Authorities throughout the Broward community, as well as the FBI, amassed a thick file of disciplinary infractions on Cruz, including the threats he made, the fights he instigated, the bullets he brought to school in a backpack. He was shuffled to different schools but never expelled, according to discipline files obtained by the Miami Herald.

Deputies had also responded to frequent calls at his home. Yet, in spite of all the paper on him, the fear of him expressed by neighbors, classmates and their families, all the personal knowledge of his actions law enforcement had in their possession, Cruz was able to avoid a criminal record, allowing him to pass a background check and buy the AR-15 used in the shooting.

By filing civil lawsuits against Cruz, the estate of his mother Lynda Cruz, who died in November, and the family that cared for him after her death, the Borges family is starting a mini-movement of its own.

Under Florida law, no lawsuits can be filed against the Broward County Sheriff’s Office or Broward County Public Schools for six months after the shooting.

Called "Ironman" for his feat of bravery, Anthony Borges has brushed off the label. “While I am honored to be called this, I am not. I am a 15-year-old who was shot five times."

Said his letter, “As of right now, I would like to go back to school, but I’m afraid this sort of thing can happen again.”

Arreaza said the boy supports his classmates who have become national figures for their stance against assault weapons, but that their chief focus isn't his. Also, Borges' father Roger Borges, born in Venezuela, relates to experience from his country of birth and said he doesn't believe protest marches are the thing that will improve school safety.

True, the school district has said Cruz wasn't part of the PROMISE program. Yet, he got the same hands-off treatment as students who were part of it and so far, no one has said why.

Jeff Bell, president of the Broward Sheriff’s Office Deputies Association, has accused the school system of tying the hands of school resource officers, saying, “They were basically paying us not to make arrests.”

At Stoneman Douglas, it was common knowledge ... they created an atmosphere where you actually have this killer brewing there,” Arreaza said, “and it’s a byproduct of the school allowing criminal behavior to go unpunished.”

As Anthony Borges continues to heal, hopefully more of the mainstream media will pay attention to the direct and honest message of a real hero of Parkland.

Jerry, if you can’t buy a gun

Permalink Submitted by John on April 9, 2018 - 11:49am
Jerry, if you can’t buy a gun legally, it is illegal to buy one at a gun show or any other way. What we need is local, state, and federal law enforcement to bring the hammer down anyone who tries to buy and is declined. Just refusing the sale on paper is not adequate. Without serious consequence people who KNOW they are not eligible will simply keep trying until they succeed in their acquisition. And yes we need more attention for states to properly provide NICS with data on adjudicated mental health questionable persons. Must be done with full due process.

The sad truth is the attempts

Permalink Submitted by the truth on April 9, 2018 - 8:52am
The sad truth is the attempts to politicize the tragedy on both sides are pathetic. This kid is a real hero, but so are many others... They are no more or less a hero because of their stance on guns. You could learn a lot from these kids, instead of just being a political hack. The problems are many and the blame is widespread. It was definitely a bi-partisan failure of epic proportions. The Repub FBI, the Repub DCF, The Dem Sheriffs Ofc, the Dem school board, etc., etc., etc. Cruz should have been arrested, he should have been treated, he should have had a lot of services, but if you somehow think a nut like him should have been able to buy a gun at Walmart, or if denied, at a gun show, you are part of the problem, instead of being part of the solution. There should be radical changes on both sides of the aisle. I personally think only CCW holders, military or LE, active or retired, should be allowed to buy assault rifles, but that is just my opinion. One thing for sure, nuts and 18 year old kids should not be. I've heard all the crap about 18 yo's in the military. As a vet, I can shoot that down in seconds, they are highly trained, given their weapon in a fiercely controlled environment, and they don't own their weapon, it is on loan by the US Gov't. Make this about common sense instead of your party crap all the time...

Permalink Submitted by Charlotte Greenbarg on April 9, 2018 - 8:03am
Nice try at deflection “Jerry”. A real hero is spot on and you like your Antifa friends blame “repubs”. Deplorable

Nancy you know it is a lie

Permalink Submitted by jerry on April 9, 2018 - 6:39am
Nancy you know it is a lie saying the students only blamed gun laws as most blamed the many other reasons too.................. Vs you are trying to make this up to keep gun regulations down..............The shooting had many reasons and likely the biggest is gun laws that kept the police from doing much of anything until the shooting. ................ And the shooting proved a cure for a bad guy with a gun is a good guy with 1. .............. There was a trained cop on site that hid like a coward he was................... Fact is Cruz even with a blocked gun permit can legally buy guns from people, gun shows repub won't budge on that allow anyone including terrorist to buy them.............We need far better background checks with better mental health, violence information on ALL gun purchases repubs have stopped, a $50/yr tax on each gun, no more than 6 round /gun before having to reload, any gun stolen owners are responsible for what it does .................... Next we need more mental healthcare and the CDC to study gun deaths which repubs stopped. ...... Don't you see the trend, smart ways to do it and repubs blocking it every step of the way causing more deaths including Parkland if you want to blame anyone, repubs are it. .

So much is so wrong with this

Permalink Submitted by Repubtallygirl on April 9, 2018 - 1:04pm
So much is so wrong with this post Jerry but nice leftist lies. Cruz had a "blocked gun permit"? Where did you read that. What a lie. Had the system already been in place properly utilized he never would have been able to purchase a gun. '$50/yr tax on each gun, no more than 6 round /gun before having to reload, any gun stolen owners are responsible for what it does.' nice leftist dreams. It will never happen. I have a speed re-loader for my revolver and can reload in 5 seconds. GUNS DON'T KILL PEOPLE!! PEOPLE KILL PEOPLE!! What do you want next? Ban knives like London? Knives kill more ppl than rifles. Your argument just doesn't make sense.