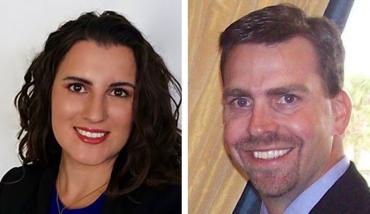 Tiffany Parisi, a Democrat perhaps better known in Jacksonville than on the Treasure Coast, filed papers Feb. 26 to run for the House District 83 seat Gayle Harrell is vacating, and in the process challenges a Republican businessman who has been in the race for the past year.

Parisi is something of a mystery to many in the District.

She and GOP opponent Toby Overdorf, a Palm City business owner, are the only two declared candidates in the district that represents Martin County and most of eastern St. Lucie County.

In papers filed with the Florida Division of Elections Parisi listed a Jensen Beach box number as her address, yet just weeks earlier was a candidate for the Duval County Soil and Water District. On her Facebook page she calls herself "a Jensen Beach native" who has "spent every summer snorkeling at Bathtub Beach, hiking in the Savannas, and fishing in the Indian River Lagoon" -- yet admits she was born in Broward County, in Hollywood, and lived there until she was 6, when the family moved to Jensen Beach.

Her treasurer is Jacalyn Crecelius, 835 Wren Road, Jacksonville 32216, but her campaign account is at a Wells Fargo Bank in Jensen Beach.

Contradictions aside, Parisi, who is celebrating her 29th birthday today, insists she is no carpetbagger.

"This is what happens when you're in a military family," she told Sunshine State News on Monday. "You move a lot and home is where you're based, even temporarily."

She said her husband, a Michigan native, is stationed at NAS Jacksonville, but the both of them are anxious to be in South Florida permanently.

"My mother still lives in the same house in Jensen Beach where I grew up and lived until I finished Indian River Community College," she said. "It's the most permanent home I've ever known."

After community college Parisi went on to university in Washington, D.C.

Beneath an online article she wrote in November 2016, she is described as a "Latina anthropologist and public health professional residing in Jacksonville, FL. Her research centers on issues of racism, genocide, violence, and community reconciliation. She currently teaches as an adjunct professor."

Perhaps voters can know her better through that personal viewpoint she penned on the Mary Sue blog site, "I'm a White-Passing Latina and This Is Why I wear the #SafetyPin."

Asked what compels her to run for a Florida House seat, she said, "Florida needs public servants first and foremost. I'm ready to step up to the plate and represent my hometown."

Parisi's camp has not filed a campaign finance report yet.

Overdorf, who founded Crossroads Environmental Consultants in 2002 and served as its president until 2016, filed his papers for the HD 83 race on March 30, 2017 and has $61,428.74 in his account to date. Currently, he is the Environmental Division president of EDC, Inc., a full-service local land development firm that he has expanded from seven to 28 employees.

He has been active in the community, including service as president of the Palm City Chamber of Commerce; on the Board of Directors of Leadership Florida (in fact, was a classmate of Florida Chamber CEO Mark Wilson); as a Torrey Pines Molecular Institute trustee; and on the St. Lucie County Economic Development Council.

Asked how he sees his chances against Parisi in a mid-term presidential year many believe will attract a larger-than-usual Democratic turnout, Overdorf said this:

“Over the last 23 years as a resident of the Treasure Coast, my relationships, experience, and accomplishments have transcended party lines for the good of the region.

"I've worked with Republicans, Democrats, and Independents to create unique relationships of respect while getting the work done. I believe these long-term relationships have allowed me to work across party lines and prepared me to work for the entire Treasure Coast, regardless of political party orientation.

"Based on this," he said, "I believe my chances for election are excellent.”

Ed Rendell Backs Philip Levine to be Florida's Next Governor

Permalink Submitted by PELA on April 1, 2018 - 1:42pm
Love the "kumbaya" moment that Mr. Overdorf tries to express and that he wraps himself around and environmental company and his relationship with everyone in Martin County. So, a few facts. The REC which he heads (headed) did NOT come out and support Sen Negron's SB10 initiative!! Mr. Overdorf also supported and presented the request to allow builders to remove wetlands of a 0.5 acre or less citing them as a nuisance to owners. What other initiatives will Mr. Overdorf compromise due to outside pressures??

Permalink Submitted by hallelujah on May 11, 2018 - 11:58am
Sounds like someone who knows the real Toby.

So she is a local and he isn

Permalink Submitted by Nice Try on March 28, 2018 - 1:06pm
Nice try, twistee Dems. Toby has been working in Martin County, raising his family in Martin County, contributing to Treasure Coast life in every way possible for more than a decade. Tell me what your candidate has done to improve our lifestyle? Where's she been? Name something she did for us in this district?

What has he done? I don't

Permalink Submitted by Who is he? on April 30, 2018 - 4:15pm
What has he done? I don't know much about either one. Telling us he contributed without telling us how doesn't do much good. Working in Martin County and raising his kids in Martin County are not telling me anything that is going to win my vote. Everyone does that. There are a lot of possible ways to contribute to Treasure Coast life, what are his?

Permalink Submitted by MATTHEW on March 22, 2018 - 3:13pm
Dear District 83 residents; I know Tiffany as her former supervisor and colleague from a university. She represents the best of a younger generation, open mind, open heart and a persistent enthusiasm for listening and serving. This is 2018 friends, your district communities and life experiences are inextricably linked and touched by regional, national and global issues everyday. Ms. Parisi is sharp and has learned much from people and places where she and her family have lived and served. Coupled with her love for your district area, she exceeds the pre-requisite strengths of any new community leader. I can assure you Tiffany is a lot more than a webpage, a mailbox or the object of armchair opinion. Get up and go talk with her...make up your own mind....an exceptional person for state representative has stepped up and forward to serve all of you.

Permalink Submitted by John on March 25, 2018 - 10:58am
Sounds more like a press release from the opposition. Best kind of negative campaigning.

What, exactly, was the point

Permalink Submitted by Ariel on March 21, 2018 - 11:18am
What, exactly, was the point of this article? What about this was in any way informative or newsworthy? This is clearly an inept attempt to smear Ms Parisi and sow seeds of doubt in the minds of readers regarding her political motivations. It's not just immature, it's actively harmful. Asserting that Ms Parisi is dishonest when she calls herself a Jensen Beach native is laughable. What are we to infer from that portion of the article? That Ms Parisi had cemented her political loyalties at age six? What nonsense. In a time when the average American's news diet consists of tinfoil hat dark state conspiracy theories, the public at large needs to be able to count upon local new sources to report the news objectively and ethically. This article was an opinion piece, and a poorly written one at that, and it should be labeled as such. The truth is important regardless of ones political leanings. Do better.

I was wondering the same

Permalink Submitted by Jennifer on March 23, 2018 - 1:15pm
I was wondering the same thing when I saw the article. I've known Tiffany since she was 16, living in Jensen Beach, and attending Indian River College. She did go out-of-state for more university adventures, but she's been back regularly over the past 10 years. She got married at the Mansion at Tuckahoe in Jensen Beach. She's only 29. Just beginning to make a name for herself. Everyone starts out as a "mystery" - and yes, this article is horribly written.

Permalink Submitted by Sonia Bond on March 21, 2018 - 12:22am
I personally know Tiffany from her many years as a resident and her continued involvement in local issues and family ties. It’s exciting to see someone put their passion and drive into action even when it may appear she is “unqualified” (which I can assure she isn’t.) I also know Toby through professional and social circles and find him an admirable candidate. I wish I knew him better personally as to have a more educated response to this article, but sadly I will have to resort to researching through reputable sources, unlike the article I’m responding to. This article is poorly written at best and I’m ashamed to see locals who find political gaslighting superior to integral journalism. My 17 year old could have constructed a better disguised attempt to troll a personal rival on Facebook. I certainly hope to see better coverage of our local elections in the future, and I do plan to follow this closely. Congrats to both candidates on their strong platforms and willingness to be a part of a needed change.

Go Tiffany! Good for you! Run

Permalink Submitted by AnnieJ on March 20, 2018 - 8:32pm
Go Tiffany! Good for you! Run on solid democratic principles. Martin County used to be a fantastic county and will be again when we take it back from the GOP. This article is pure partisan politics. Is the author a friend of the republican? Anyone in 2018 who identifies republican is no friend of the environment, women, children, people of color, animals, morals..,,.

^ Submitted by an Anonymous

I was sad when Tiffany moved

Permalink Submitted by Daniel on March 20, 2018 - 10:33am
I was sad when Tiffany moved home to Jensen Beach. She has a lot of friends in Jacksonville and her husband serves proudly in the US Navy here. But she loves her community and wanted to find a way to serve her area through public service. She’s sharp and will be great state representative. Yellow journalism likes this is sad for our democracy. This isn’t even a hit job, it’s just wrong and stupid.

What is wrong and stupid? Was

Permalink Submitted by Joel on March 20, 2018 - 10:44am
What is wrong and stupid? Was any of this write up wrong? People around town are wondering who she is. She came out of nowhere, yes she is a mystery.

I live in Jensen Beach and

Permalink Submitted by Sandi B on March 20, 2018 - 10:13am
I live in Jensen Beach and have personally known Tiffany since she was a teenager, so I'm not sure what a 'mystery' this is. A 'mystery' person would be Brian Mast, who didn't grow up here, had no roots here and was basically paid to move here to the Treasure Coast. Tiffany brings her love of the Treasure Coast, growing up literally on Indian River Drive, to the table. Her passion to save our Rivers and her passion for fair and affordable healthcare for all Floridians makes her an excellent candidate! I'm looking forward to her representing us in Tallahassee.

The 'mystery' is why folks

Permalink Submitted by Joe on March 20, 2018 - 9:42am
The 'mystery' is why folks who live along the St Lucie River and the Indian River lagoon will keep voting for the puppets of Big Sugar. Don't worry, your guy and the algal blooms will win easily.

Permalink Submitted by C Breeze on March 20, 2018 - 6:40am
"...I'm a White-Passing Latina.." SAYS IT ALL about this woman's sub-conscious, racist, "RAZA" mindset;... AND,.. ALL I need to know about her manipulative self-serving, opportunistic, intentions... BE VERY CAREFUL BEFORE SQUANDERING YOUR VOTES FOLKS !... [Strict "voter ID laws" will preclude "cross-anything" candidate/manipulation ! ]

Can you help me understand

Permalink Submitted by Jennifer on March 23, 2018 - 1:07pm
Can you help me understand your mish-mash word salad there? I don't see anything intelligent in your response "C Breeze" - help me out?