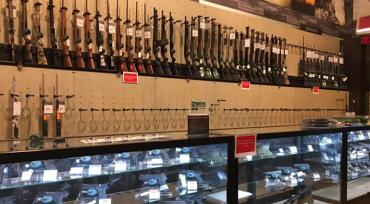 Walmart, the nation's largest retailer, and Dick's Sporting Goods, which has more than 600 shops -- 37 of them in Florida -- announced Wednesday major gun reform policies in their outlets, and ever since have been hearing praise from the anti-gun lobby and boobirds among the nation's hunting class.

Dick's said it was done selling assault-style rifles; Walmart issued a statement raising the minimum age for anyone buying guns or ammunition to 21 years.

Walmart also said it would remove items from its website that resembled assault-style rifles. The retailer stopped selling high-powered rifles in its shops in 2015, citing low demand.

The flak-fielding NRA remained characteristically silent. That's what the NRA does after a mass-casualty shooting like Nikolas Cruz's rampage at Marjory Stoneman Douglas High School in Parkland. It turns to a playbook it has perfected over several decades, critics and supporters told Sunshine State News.

The NRA approach calls for aggressive fact-finding and long strategy sessions before any public statements. The Fairfax, Va.-based organization has waited weeks before responding to past deadly incidents NRA critics call the indirect result of its resistance to tighter gun control.

While calls go out for every kind of ban possible, the organization's first priority is to learn what it can about the shooter. The NRA insists what matters isn’t the particular type of gun, but the person holding it ... and how they came to obtain it.

In the aftermath of the Feb. 14 shooting, pressure has mounted on politicians at all levels of government, but particularly state lawmakers in Florida in the middle of the 2018 legislative session, to act on gun control and for corporations to cut ties with the National Rifle Association -- which many are doing.

“It’s stunning — nothing like this has ever happened before with the NRA as far as I know." ... The #BoycottNRA hashtag, the unofficial unifier of the movement, was trending on Twitter earlier this week. It appeared more than 10,000 times in a single four-hour period, according to the analytics service ExportTweet ... The boycott effort -- parts of it organic, parts of it carefully orchestrated -- is widely called "an impressive show of force" against the gun lobby.

On the other side of the issue, state Rep. Matt Caldwell, candidate for Florida commissioner of agriculture, isn't ducking the conversation either, nor is he waffling about it.

“The Citizens United case confirmed that the First Amendment protects everyone’s free speech, both individuals and corporations like Dick’s Sporting Goods and Walmart," Caldwell said Thursday. "If you don’t want to sell a product to someone based on your beliefs, you don’t have to, whether it’s firearms or cakes for same-sex weddings. I’m a proud lifetime member of the NRA and I’ll be sure to spend my dollars where they are welcome.”

"Given that the issues of bureaucratic incompetence, school safety and mental health demand immediate attention, I’m disappointed that the Florida Legislature is rushing to restrict the rights of law-abiding citizens," DeSantis said Thursday. "When dealing with a right that is specifically enumerated in the Constitution, blanket restrictions that diminish individual rights are suspect.

"Better to focus on denying firearms to dangerous individuals, which avoids infringing on constitutional rights and is also more likely to be effective. The goal should be to keep our students safe, bring accountability to the officials and institutions that failed, and protect the rights of Floridians,” he said.

Dick's CEO Edward Stack told CNN he expects a backlash from some customers, saying "the hunt business is an important part of the business, no doubt about it."

Cruz, the 19-year-old confessed Parkland shooter, bought a gun at Dick's, though it wasn't the weapon he is alleged to have used in the attack, Stack said.

Permalink Submitted by Tampaguy on March 2, 2018 - 10:28am
Looks like our "Constitutional Law of the land" - the rule of law - is under attack by the Politically inferior minds of (mostly) Democrats / Socialists. Don't ANY of these people LEARN from HISTORY? It's not GUNS... it mental disorder! TREAT THAT!

Keep the guns from criminals

You cannot prevent nuts and

Permalink Submitted by Anonymous on March 6, 2018 - 12:05pm
You cannot prevent nuts and loons from owning guns if they are so easily obtained by the population at large. For instance, no background checks are required on private sale.

Permalink Submitted by C Breeze on March 2, 2018 - 7:51am
To "SSN": Your indiscriminate use of **********'s to suppress the legitimate meaning (and utilization) of language is what I call "the clincher"! I am of the further opinion that your intent can only be your 'new' policy of "manipulating reader's 'free speech' comments" to conform to the wishes & agendas of the loudest of your uninformed readers as well as the weakest of your "political masters" and "corporate financial contributors". So, "GOODBYE SSN",.. it was fun while it lasted, but the *****'s are just too much to abide by, and an insult to your readers' intelligence and loyalty. "Ve con Dios"

We have no such intent.

Permalink Submitted by Nancy Smith on March 2, 2018 - 11:15am
We have no such intent. Because our previous spam filter service went out of business, we have a new one we're trying to work with as we get the kinks ironed out. I'm sorry for the inconvenience. I know the deletions seem personal to you and other readers, but I assure you, this is a digital monitor making such frustrating decisions from cyberspace. I'm sorry to lose you, CBreeze and hope you will reconsider.

Permalink Submitted by Elaine Harmych on March 1, 2018 - 8:46pm
Although limiting gun sales to those under 21 won't hurt, it will not eliminate the cause of the problem. Gun Contol is an oxy***. This has been discussed since the 1960's. Does anyone really believe that the mental Ill will turn in their weapons? Or the criminal ? We now have more guns than people and the horse is out of the barn and will not be going back. 2). In the 1950's we had more hospital's for the mentally ill than we have today and 1/2 the population. We need to treat the root of the problem. More hospitals for the mentally ill The Baker act is a joke. We place them in hospitals for 3 days or 5, release them with no significant treatment and let them go. Just a revolving door. The Boston marathon was effected without guns but with nails etc. And the horrible criminal act in Oklahoma committed by fertilizer. So where do we go from here? Treat the mentally ill with more hospitals and long term treatment. Criminals/ mentally Ill will always find a way to commit destruction. Treat the inner problem and then, maybe we can find an answer. I have left messages before but they were deleted. Why, because I also criticized the media. Quit harping about bump stocked weapons,because of your incessant grandstanding no one ever heard of such weapons. But after your need for higher ratings the sale of such weapons increased. Let's stop it now before it happens again. Guns are not the answer, much too late. Treat the mentally ill, the real cause now!!! Save this!!!!!

Elaine - how right you are.

Permalink Submitted by Robbie on March 2, 2018 - 9:53am
Elaine - how right you are. Problem is that the politics of the moment is to manage a society on the CHEAP - Since about 1980, and the advent of trickle down economics this is what happens. We keep voting for politicians that want government on the cheap - starve the beast and let everyone look out for themselves. The Party that has control the debate in this country for the last 30 plus years like it that way. And what happens every elections - the scare the Sh*t out of people and what they do? Vote for the Same Clowns. So we get what we vote for. Lastly when 51% of the people who could vote don't - they in affect vote for those who like it as it is. What will need to happen to get people to understand that a Society cannot be managed on the Cheap? When we realize that it can't then maybe will have those metal health hospitals and better yet - A single payer system. Dream is all we can do.

If your looking to purchase a

Permalink Submitted by Steve on March 1, 2018 - 8:41pm
If your looking to purchase a firearm , especially if it's your first one, your better off going to a local gun shop anyway. The pimply faced kid behind the counter at Wally World knows nothing about what you should buy, how it works , etc.

I don't shop at either of

Permalink Submitted by army op's vet on March 1, 2018 - 8:23pm
I don't shop at either of those stores even if they did even sell guns...just like I don't eat Papa Johns pizza......hoorah Pizza Hut....in fact ALL of those Stores Boycotting NRA I never have used there Services...Far as Delta I quit flying in late 80's when they hired Low Rate Jet Service Mechanics...