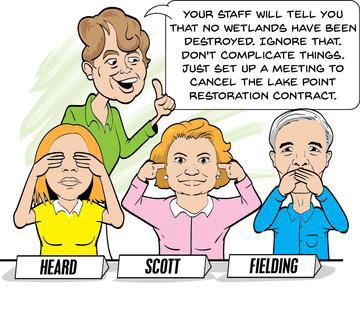 The Lake Point lawsuit against Maggy Hurchalla, a former Martin County commissioner and environmental activist, alleging she interfered with the western Martin rock mine's contracts, finally … finally … goes to trial Monday. The county has endured five years of legal wrangling, accompanied by the choreographed hand-wringing and inflammatory remarks by Hurchalla groupies to get to this point.

As the trial date approaches, the intensity increases as Hurchalla supporters emphatically begin pointing to Lake Point as the culprit in creating this mess  -- those billionaires -- as if their wealth alone is sufficient evidence to vindicate Hurchalla of wrong-doing.

We have seen those widely distributed email blasts accusing Lake Point of hiding behind the scenes, pulling the strings, controlling even the state attorney and the grand jurors, who indicted sitting Commissioners Sarah Heard and Ed Fielding on two counts apiece and former commissioner Anne Scott on four counts of violating the state public records laws.

Never mind that the criminal charges came after a civil court ruled these public officials had not fully and timely complied with public records requests to turn over their private Hurchalla emails. By the way, that ruling alone cost Martin County more than $500,000 in sanctions.

We have heard over and over again how this lawsuit is simply a SLAPP suit against Hurchalla to shut her up. A Strategic Lawsuit Against Public Participation that violates Hurchalla's First Amendment right to free speech is what her attorney, Virginia Sherlock, calls it, although three circuit court judges disagreed with that assessment by denying her attorneys' requests to dismiss the suit on those grounds.

Some of those secret emails were recovered, however, and will be presented as evidence in the upcoming court case. They will confirm what many, many Martin County residents have suspected for years.

It was Hurchalla behind the scenes pulling the strings of county commissioners, as she dictated edicts to them, not only about Lake Point, but about multiple other controversial issues. At times, she even wrote the memos for commissioners to copy to send to the county administrator under their own names, and those emails are already in the public record.

Is that against the law in Lake Point's case? That's not for us to say. That is for the jury to determine.

Jurors will wade through testimony by a possible 50 witnesses or more, evaluating more than 120 pieces of evidence, and listening to opposing scientific views by each side's experts about what's best – or not – to restore the Everglades.

They will not hear testimony, however, from the three Martin County commissioners who allegedly followed Hurchalla's edicts in lock step and may even have broken the law to protect her. Those three commissioners – who you think would be eager to tell their stories to the jury in a courtroom – have taken the Fifth Amendment in advance of the trial to protect themselves.

We cannot predict the outcome. We do not know how the jury will vote at the end of the predicted two-week trial. The only thing we know for sure is that the shenanigans performed at County Commission meetings will be checked at the door of Judge William Roby's courtroom, and then -- just maybe -- the Lake Point issue will be behind us once and for all.

Barbara Clowdus, author of this commentary, is editor and publisher of Martin County Currents.

Robert Matheson is a

Permalink Submitted by Tom Andersen on February 28, 2018 - 8:20am
Robert Matheson is a dishonest attorney from Martin County . His family owned all of Palm City right into the 60’s prior to developing it .....now he back Hurchulla with his money to stop development....Robert Matheson is also a tax cheat. Nice crowd Hurchulla hangs with...her actions smell Robert Matheson.....he even testified to have a park named after her....Matheson’s family donated the whole Miami park system a generation ago..... but Robert Matheson, the brother of my wife 40 years , is a thief and lawyer behond the scenes.....