How Bill Nelson Is Souring the Milk of Human Kindness, or Trolling Grief for Campaign Cash 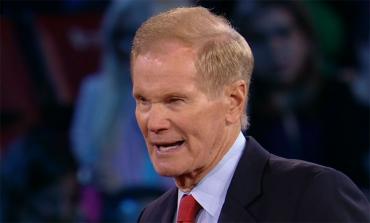 It's one thing to politicize a tragedy that's left dozens of your constituents grieving. Unsavory as it is, it happens every election year on both sides of the aisle.

But when a politician uses a horrific act like the Parkland massacre of 14 high school students and three teachers to fill his campaign chest, he really is down there with the slithering serpents.

I'm talking about you, Bill Nelson.

Florida's senior senator is blasting out begging email -- at least three pieces I've seen this week -- proclaiming to be Florida's savior from guns and, while he's at it, preying on constituents' raw emotions to collect.

His Republican opponent Rick Scott, he says, "refuses to enact even the most commonsense gun-control reforms" ... but thanks to a $50,000 match program initiated by generous Democratic donors ... (give) $5 right now, before this match expires, and you can keep the NRA "from gaining even more power in Congress" plus get every dollar of your gift doubled. This is his check-the-box page.

My favorite of Nelson's Dumpster-dollar-dives came in the “survey” email his campaign sent out asking gun-control questions, a ploy to collect email addresses for future fundraising solicitations. It was written the day after the CNN town hall with Parkland students, parents and community members. He again has the gall to ask for donations of $5 to $1,000 because "America is long past due for a hard conversation about gun violence."

Remember, Nelson has been in Washington feeding from the public trough for half a century ... under Republican and Democratic presidents, Republican and Democratic Congresses -- all the while with zero gun control legislation to show for. This kind of situation, tragedy-time, is always when Bill Nelson turns up pontificating, in the midst of misery. He did it after Pulse, he did it after Las Vegas. Here he is again, he's got your back -- all he needs is your money and by golly, he'll protect it.

People are vulnerable after a tragedy like Parkland. They're angry, they identify with the victims, they want to help. And money does flow during such times, because that's when it truly is the milk of human kindness. It's painfully obvious Nelson is counting on that.

Sadly, in none of Nelson's emails did I see or feel sincerity or empathy toward the victims of the shooting. Each seemed to me a gross display of politics and partisanship.

In one he said, "... I mentioned that Sen. Marco Rubio had the guts to show up last night -- while Florida Gov. Rick Scott -- who has an A-plus rating from the NRA -- was nowhere to be seen."

Should Scott have participated in the CNN town hall? Bill Nelson thought so. In fact, so did Chris Cillizza, CNN's editor at large, who wrote a scathing commentary after the CNN townhall -- but Cillizza directed it at Nelson, not at Scott. Here's how the editor wound up his article:

"Look. Scott should have shown up on Wednesday night. Not doing so was a mistake. But I thought Nelson made a major mistake, too. That town hall wasn't about racking up political points on a likely opponent. It was about trying to get beyond all of that -- even for a night -- to just have an honest conversation about guns. Unfortunately, Nelson didn't get that memo."

Read the whole Cillizza piece. I feel like he read my mind.

The governor, on the other hand, though absent from the CNN event, has been in Parkland four out of five days this week seeking advice and help from students, families, teachers, townspeople, law enforcement.

I listened to Scott Friday morning talk about his plans to invest a half billion state dollars into improving school security and expanding mental healthcare initiatives. He also proposed sweeping changes to the state’s gun control laws aimed at keeping firearms out of the hands of those who would do harm to themselves or their community.

And I wonder, what are Bill Nelson's plans to keep schools safe? I have no idea what his response will be. I'm just fairly sure his No. 1 concern will be making it another path to campaign loot.

Permalink Submitted by SoFineSoFla on March 7, 2018 - 8:09pm
Nelson is taking Scott seriously, that's why he is putting down his bingo cards and making an attempt to get out and troll for support. If there was ever a case to be made for term limits, Nelson is it.

Nelson is a used tire...

Permalink Submitted by the truth on February 26, 2018 - 8:53am
Nelson is a used tire... However, Scott is no better. These fools had years to come up with something, anything to prevent tragedies like this. What did they do? Nothing... Now that they are clearly in the crosshairs and the reelection is not looking nearly as promising, they are falling over each other to propose actions...in a word, pathetic. We need new blood in office people...

On the Friday after the

Permalink Submitted by scexile on February 25, 2018 - 8:20pm
On the Friday after the shooting, the President sent a newsletter lamenting the horror and with a " contribute" box at the end . He did refrain from golfing for 2 days..

Nancy I love your stuff. Live

billy nelson the King of BS..

Permalink Submitted by army op's vet on February 24, 2018 - 1:29pm
billy nelson the King of BS....just like his Pledge to us Space Shuttle workers To keep Program running....Then he got re-elected & Flip Flopped Just like Obama ...told us to our Faces Keep Space Going then ...BOTH stopped IT......Billy is a Ambulance Chaser for Disaster's in Florida toget Re-elected.....Then Does Nothing but BACK STAB........He will Jump on ANY TRAIN of Misfortunes toget Elected.......Vote for BS BILLY..and he talks out the wrong END.....

Permalink Submitted by Robert Warner on February 24, 2018 - 8:16am
Scott's tenure as Governor got us here. Sorry, Nancy.