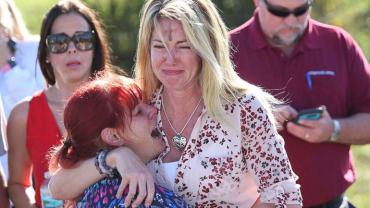 At least 17 are dead after a gunman opened fire at about 2:20 p.m. Wednesday at a high school in the affluent Broward County city of Parkland, according to law enforcement officers on the scene.

The rapid gunshots, first thought by many at Marjory Stoneman Douglas High School to be fireworks, sent students running for their lives, then resulted in a school lockdown.

At least 14 injured students were taken to hospitals, the Broward Sheriff's Office said, though their conditions were not immediately clear.

Officers arrested 19-year-old suspect Nikolas Cruz, thought to have been a former student at the school. Cruz had slipped out of the school after the shooting by blending in with other students who were trying to escape, according to two law enforcement sources and an eyewitness. 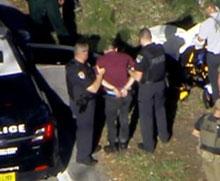 Nikolaus Cruz is taken into custody

Broward County Sheriff Scott Israel said Cruz used an AR-15 rifle in the "horrific" shooting and was equipped with "multiple magazines." He said 12 people were found dead inside the school, two just outside the building and one on Pine Island Road. Israel said two other victims died at the hospital.

Teacher Melissa Falkowski said she hid 19 of her students in a closet as shots were fired.

One student who had been close to Cruz described the suspect as a "strange kid" who liked to kill small animals.

"He was psycho, for sure," the teen told reporters. "He was crazy because he liked to kill small things, like little animals -- frogs and other animals like that and he just had a crazy mind. He was racist and he was just crazy."

At 7 p.m., authorities were still piecing together the details of the massacre

Ironically, in 2017 Parkland was voted Florida's safest city in an analysis by the Washington-based National Council for Home Safety and Security.

The group said the south Florida city, with a population of 31,507, had only seven reported violent crimes and 186 property crimes last year.

This was the first school shooting in Florida this year. But it is the 18th nationwide in the first 45 days of 2018, according to the nonprofit gun control advocacy group, Everytown for Gun Safety.

President Trump quickly sent his condolences to the victims in the Parkland shooting. "No child should feel unsafe at school," he said.

And before 4 p.m. Florida Attorney General Pam Bondi had released a statement: “Praying for everyone involved in today’s shooting at Marjory Stoneman Douglas High School," she said. "I am on the way with my victim advocates and we will be available in full force to help all victims and their families with any services they need.”

Not making this terrible

Permalink Submitted by the truth on February 15, 2018 - 9:25am
Not making this terrible tragedy political, but kids or civilians should not have access to military weapons... I also believe as some others here do, that more citizens/staff should be armed in schools, because right now, they are being targeted by nut jobs... I'm not talking everyone, but at least the principal, dean, asst. principal, and maybe even all the police/security. The first time a wacko is shot and killed prior to harming anymore students, schools will immediately become less of a known target. As a Veteran, this is just my two cents from someone with experience in eliminating nut jobs...

Permalink Submitted by Anonymous on February 15, 2018 - 12:34pm
Cognitive dissonance. Lets arm more people while removing guns from the reach of minors. Good luck with that - not working so far.

what is not working so far?

Permalink Submitted by the truth on February 16, 2018 - 9:39am
what is not working so far? right now the only one armed in a school is the SRO, 1 person. They cannot cover everywhere in a school with over 3,000 kids. So Anonymous, who is really cognitively dissonant here?

we need to get rid of all

Permalink Submitted by AL on February 14, 2018 - 9:29pm
we need to get rid of all these ultra right FASCISTS in government, who support the use of weapons...starting with crazy eye Ricky and his cronies and Pam Bondi and company....

Guess you didn't know the

Permalink Submitted by Robert on February 15, 2018 - 9:58am
Guess you didn't know the shooter is a registered democrat, just as you probably are! Maybe we should just make it illegal for democrats to buy guns!

Yes, yes, of course you must

Permalink Submitted by C Breeze on February 14, 2018 - 8:44pm
Remember our Nation's unique "Constitutional Second Amendment"; and STOP creating "gun free zones" where our Citizens are prevented from protecting themselves AND each other: Teachers, Administrators, Ministers, Custodians, Office Personnel, Cafeteria workers...and OTHERS, can eliminate or minimize deaths and injuries UNTIL Law Enforcement ACTUALLY ARRIVES...

leave it to this fat ass

Permalink Submitted by pasture breeze on February 15, 2018 - 9:00am
leave it to this fat ass loser to try to politicize a terrible tragedy. That's the thing about idiots from everywhere else (NY), they all think they know what is best for FL. What is best for FL is if you take your fat ass back to NY and get a job loser...

Neither is your bigotry and

Permalink Submitted by Anonymous on February 15, 2018 - 12:35pm
Neither is your bigotry and racism, C Breeze.

So by your thinking. Let all

Permalink Submitted by Voted yes on 2 on February 15, 2018 - 8:42am
So by your thinking. Let all adults at the school carry guns. So that a kid with mental problems that doesn’t have access to a gun can easily find it everywhere in the school. Because you know the teachers are or will be keeping them in their desk. So I guess you think the kids can’t get to it easier.

NO ONE said "ALL" adults.

Permalink Submitted by C Breeze on February 15, 2018 - 9:53am
NO ONE said "ALL" adults. Additionally, it has always been supposed that "teachers" are smarter than YOU seem to give them credit for... (Are YOU one of those teachers that races the kids for the door at the final bell of the day?...I suspect YOU are ).

...ONE "defensive action" by

Permalink Submitted by C Breeze on February 14, 2018 - 8:54pm
...ONE "defensive action" by an armed presence "ENDS IT", OR focuses an assailant's attention on "escape", or into a "hidey-hole", giving Law Enforcement precious time to reach and control the scene...

Yea yea, someone may have

Permalink Submitted by Anonymous on February 15, 2018 - 12:36pm
Yea yea, someone may have been able to shoot the killer down. But how many children die first? How many is acceptable to you? 1, 5? Should our focus be on minimizing the death, or preventing it?

"Mental health issues" is an

Permalink Submitted by C Breeze on February 14, 2018 - 9:26pm
"Mental health issues" is an "after the fact panacea" rationalization, virtually useless when having already been the subject of a psychopath's attack...Up until that point (and quite often beyond) psychopaths almost always remain camouflaged and invisible among the "population" they are a part of... Psycopathy is still an ongoing "study" and doesn't usually reveal itself until after an attack, and subsequent Court Order and/or prison confinement and long term psychology sessions... Even Psychyatrists & Psychologists are reluctant to label a person a "psychopath" without extensive evidence (such as in the cases of "serial Killers").

Not true at all. He was

Permalink Submitted by Lisa on February 15, 2018 - 4:46am
Not true at all. He was known to the kids at school as crazy, described as enjoying killing small animal, and had been expelled. Clear warning signs. Expelling him did no good.

So many people knew he had

Permalink Submitted by Elaine Harmych on February 14, 2018 - 8:30pm
So many people knew he had mental health issues and the politicians are falling all over themselves saying we need treatment for the mentally ill. But the first programs cut are for the mentally ill. They have no lobbyists and the politicians are Hippocrates because these are the first programs cut. Mental health facilities are not fiscally productive. Shame on you all. Inpray for this community, the victims and families

NO, people knew he sometimes

Permalink Submitted by C Breeze on February 14, 2018 - 9:45pm
NO, people knew he sometimes acted strange...or was kinda "different"; but almost everyone who thought that just avoided him...and no one "reported" his strangeness or just avoided getting involved...for fear of retribution or being labled.."rat". THE BOTTOM LINE: We are all "Our Brother's Keeper"! (Much of today's tragedy could have been avoided right at the Principal's or Guidance Counsellor's offices...long before today. Even politicians can't "Legislate" against psychopathy....(or else we would ALL be in jeopardy)!

Permalink Submitted by Anonymous on February 15, 2018 - 12:37pm
Our fearless leader rolled back restrictions on the mentally ill owning guns.

I am Praying for all Students