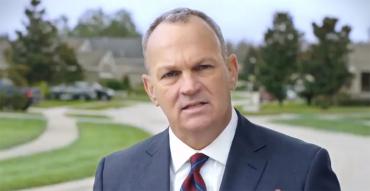 Richard Corcoran has proved he isn’t playing around when it comes to sanctuary cities in the Legislature, but now he’s out with an explosive new ad to prove just why he thinks the refuges for undocumented immigrants are dangerous to Floridians.

On Monday, Corcoran’s Watchdog PAC released a chilling ad depicting what Corcoran says are the consequences of sanctuary city policies.

The ad is considered to be a sneak preview to Corcoran’s potential gubernatorial campaign, which has not yet been announced.

The 30-second clip opens up with a smiling young woman reading messages on her phone, but the happiness is short-lived -- soon after, the woman is gunned down by a hooded man.

“A young woman gunned down by an illegal immigrant who should have been deported, but was protected by a sanctuary city,” Corcoran says in a voiceover.

Corcoran then recalls the case of Kate Steinle, a San Francisco woman who was shot and killed by an undocumented immigrant and seven-time felon in 2015.

Steinle’s death became the catalyst for a national conversation on illegal immigration and sanctuary cities, which protect undocumented immigrants from deportation.

San Francisco has been a sanctuary city since 1989.

“When I heard Kate Steinle’s story, I thought about my own daughter, Kate,” Corcoran said. “This could have happened to any family, anywhere.”

Corcoran has led the charge against sanctuary city policies in the Florida House, which recently passed legislation banning Florida communities from acting as safe havens for undocumented immigrants.

Fines for city council members who violate the ban or refuse to comply with federal immigration policies could climb up to $5,000.

Local officials who refuse to work with federal authorities could be removed from their jobs if the bill becomes law.

The issue of sanctuary cities has become a hot button topic in Florida’s gubernatorial race. Although the proposed ban has gathered widespread support among House members and conservatives, Democrats have been quick to express their disapproval of the concept.

“In the age of Trump, Corcoran is vilifying immigrants. It's a vile ad that seeks to divide us against one another, and the Speaker ought to be ashamed of himself,” Gillum said.

Corcoran seemed to point at least part of his ad at Gillum, who has been criticized by other Republican gubernatorial candidates like Adam Putnam of wanting to make Florida a “sanctuary state.”

Gillum has never specifically said he wants to make Florida a sanctuary state.

Corcoran hasn’t officially filed paperwork to run for governor just yet, but if Monday’s ad is any indicator, it might not be long before he jumps in the race.

View the ad below:

Permalink Submitted by Dan on February 11, 2018 - 12:20pm
Of course Corcoran's ad itself is a lie. From: https://www.orlandoweekly.com/Blogs/archives/2018/01/31/corcoran-runs-sanctuary-cities-ad-in-sad-attempt-to-be-floridas-most-racist-candidate Garcia Zarate was acquitted of murder and manslaughter charges after a jury found he wasn't aiming at Steinle when the gun fired after he picked it up – the bullet ricocheted off the ground in front of Garcia Zarate and traveled almost 80 feet before hitting Steinle. The jury did convict him, though, of being a felon in possession of a firearm. Garcia Zarate likely killed Steinle by accident, but that hasn't stopped Trump, Corcoran and every other Republican from using her death to vilify undocumented immigrants and attack "sanctuary city" policies.

you have my vote because you

Permalink Submitted by mike spears on February 3, 2018 - 10:02am
you have my vote because you must be good to have a wife that looks like her

Permalink Submitted by Jeff U on January 31, 2018 - 9:10pm
Glad to see politicians having the backbone to demand the end of sanctuary cities.

Talk about racist right out

Permalink Submitted by jerry on January 30, 2018 - 7:02am
Talk about racist right out of the box any thing i had for him has gone. I guess this is what republicans are now. .......... Note he isn't running this in south Florida but they'll know about it driving even more away from the party . Sad. ............But I guess that is what you get with Trump as your leader.

Permalink Submitted by Charlotte Greenbarg on January 30, 2018 - 7:38am
No, he’s vilifying criminals who have been deported but came back. Oh right, you’re an Antifa troll.

Only a racist would say that

Permalink Submitted by jerry on January 30, 2018 - 12:35pm
Only a racist would say that as facts show illegals cause less crime than citizens. Note the big crimes , mass shootings, etc are done by the far right terrorists, your heros....l don't believe antifa either but they are tiny compared the the far right nutjob numbers, deaths. So far i do know of them killing anyone vs 100s by the far right including many police officers you all kill, even ambushing them how many times the last yr.?

Permalink Submitted by C Breeze on January 30, 2018 - 12:58pm
Sounds to me like Corcoran may even have "found a pair"; (might even be "the pair" you might have lost "jerry", but in reality are hardly ever found in possession of a castrato...)