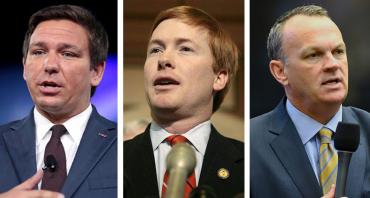 While he hasn’t been running for governor for long, Ron DeSantis is closing on Adam Putnam in the Republican primary to replace term limited Rick Scott, a new poll shows.

Last month, after President Donald Trump encouraged DeSantis to run for governor, the Northeast Florida Republican congressman jumped in the race. Mason Dixon released a new poll on Tuesday morning showing DeSantis is right behind Putnam in the Republican primary. Putnam takes 27 percent while DeSantis is on his heels with 23 percent. While state House Speaker Richard Corcoran hasn’t entered the gubernatorial primary, he was included in the poll and pulls 7 percent. A plurality of Republicans--43 percent--remain undecided on who they plan to back in the August primary.

Putnam, who served in Congress and won two statewide elections to serve as Florida agriculture commissioner, leads among all age groups and with both men and women. The Tampa Bay area and Southwest Florida break Putnam’s way as he takes 35 percent of Republicans there followed by DeSantis with 17 percent and Corcoran with 9 percent. Putnam also leads in Central Florida with 29 percent while DeSantis takes 22 percent there and Corcoran garners 5 percent in that area.

The poll shows DeSantis doing well in his North Florida base with 28 percent followed by Putnam with 17 percent and Corcoran with 5 percent. Things are tighter in Southeast Florida where DeSantis edges Putnam 26 percent to 25 percent while 6 percent are for Corcoran.

I don't want a governor who

Permalink Submitted by Barb on February 6, 2018 - 7:41pm
I don't want a governor who signs bills that are pro-Israel, which threaten businesses who refuse to do business w/Israel. A court decision in Kansas just said it's a violation of one's first amend rts to force people/businesses to do business w/Israel Remember Americana First? We don't need to make Israel second and I feel DeSantis is going to cowtow to Israel (jewish campaign donations? )or is he reading his Bible wrong. The so-called "chosen people" rejected Christ!! We Christians are under the new covenant! The nation of Israel is not Israelites!! The 6 pointed star is an abomination

Do you realize how stupid a

Permalink Submitted by Caw on February 9, 2018 - 9:25am
Do you realize how stupid a person you are? I don't think a state governor has much say over foreign policy stop for a second and evaluate your pathetic life

The lack of understanding of

Permalink Submitted by CD SONGBIRD on February 8, 2018 - 11:49am
The lack of understanding of the important connection with Israel is quite clear in your statement. #!--ALL humanity was guilty of the murder of Jesus Christ, who, by the way, has RISEN and sits at the right hand of God the Father. #2--The ignorance of the importance to have a vital connection with the nation State of Israel is BIBLICALLY based. The gentiles were the ones who were grafted into the new covenant. The Jews HAVE ALWAYS BEEN & ARE STILL HIS CHOSEN PEOPLE. Try reading Romans 11 and get your warped perspective aligned with that of God's heart. Replacement theology, which you have obviously embraced, is outright HERESY and those who curse His people WILL BE CURSED!

I want a governor who will

Permalink Submitted by Jess Lee on February 7, 2018 - 5:09am
I want a governor who will ignore the rantings of a crazy woman like you. The boycott of Israel is a Pro-Palestinian action. We do not support terrorist states. The Star of David may be an abomination to you but it along with the cross/crucifix is not an abomination to the people of Israel or the Jewish community in the United States.

I as a Conservative

Permalink Submitted by RepublicanConscience on February 6, 2018 - 7:13am
I as a Conservative registered as a Republican, cannot consider selecting Adam Putnam as the GOP nominee for Governor. The main reason is Putnam doesn't respect property rights and weighs in telling landowners what they can and cannot do with their legally owned property. If you can't respect property rights no one is safe. Ron DeSantis has been exhibiting strong Conservative principles while working to aid Trump in "Making America Great Again." Does Adam Putnam have any accomplishments? I cannot think of any. Let's look at his management skills, has Putnam reduced his budget during his tenure? It seems that Putnam's only qualification is "Name Recognition." Meanwhile, DeSantis is on Fox News often, the Republicans that have to vote in the Primary all watch Fox News so not only know DeSantis' name, they can recognize his face too. When the Primary race kicks into high gear, Putnam will stall out. If you haven't figured it out yet, never bet against Trump. Trump is behind DeSantis and I'm on that train too. Putnam is toast. You heard it here first.

Permalink Submitted by jerry, on February 6, 2018 - 6:57am
I use to like Putman as a decent honest person but in the last 4 yrs he has become another , least fake as a far right idiot with no core values anymore as the changes with the wind pandering makes him as bsd as the rest........And Corcoran's commercial just killed many Hispanic and other decent people's votes for not just him, but the republican party as they dive for bottom.