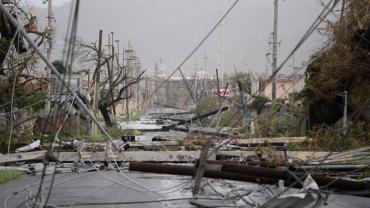 More than four months after Hurricane Maria devastated Puerto Rico, nearly 450,000 of Puerto Rico’s 1.5 million people are still without power. Residents of some parts of Puerto Rico found themselves in catastrophic conditions after the monster storm ripped through the U.S. territory, in dire need of federal assistance to deliver necessities like food and water.

FEMA says it’s time for aid to be cut off since only one percent of Puerto Ricans need the aid, but not everyone is convinced the agency’s decision is in the best interest of the Puerto Rican people.

Over 215,000 Puerto Ricans have fled to the Sunshine State following the storm and Florida politicians were quick to respond to Tuesday’s announcement, upset over the agency’s decision to cut off aid to the struggling island.

“FEMA cutting food and water aid to Puerto Rico, while more than 1/3 of the island is still without power, is a travesty,” said U.S. Sen. Bill Nelson, D-Fla.

Nelson, who has pushed for providing more financial aid to the area in recent months and visited Puerto Rico, said he would be heading to the Senate floor Tuesday to call on the Trump administration to reverse FEMA’s decision and continue providing funding for the people of Puerto Rico.

The Florida Democratic Party criticized the Trump administration for “abandoning American citizens” during their time of need.

"The announcement that aid would end on January 31 is both heartbreaking and shows an absolute lack of respect for fellow citizens,” said Florida Democratic Party senior spokesman Caroline Rowland.

So far, FEMA has approved over $500 million in public assistance related to Hurricane Maria -- and in Florida, responding to the influx of Puerto Ricans has been a top priority for Gov. Rick Scott.

Earlier this month, Scott signed an executive order extending the state’s support for Puerto Ricans displaced by the storm.

“Puerto Rico was totally devastated by Hurricane Maria and so many families lost everything. With families displaced by Hurricane Maria already present and still arriving in Florida, it is critical that our state is prepared to provide the resources they need upon entering our state," the governor said when signing the order in October.

Federal officials say the aid isn’t necessary anymore and is negatively impacting the economy of Puerto Rico, which has struggled to recover as families lost their entire lives as a result of Hurricane Maria.

"If we're giving free water and food, that means that families are not going to supermarkets to buy," FEMA Puerto Rico director Alejandro De La Campa told NPR on Tuesday. "It is affecting the economy of Puerto Rico. So we need to create a balance. With the financial assistance we're providing to families and the municipalities, they're able to go back to the normal economy."

Poor Nelson was born with a

Permalink Submitted by Tampaguy on January 31, 2018 - 9:42am
Poor Nelson was born with a "Leapfrog" brain. has he forgotten about the "Hidden Treasures" found IN P.R. that were "illegally stored"? Let them help themselves - Yes, P.R. is a Territory of America - but he's ignoring HIS OWN STATE!

Permalink Submitted by Frank on January 31, 2018 - 11:23am
Yes, yes, you must be right . . . . far right --> SEPT 11 - "Nelson, D-Fla., urged Energy Secretary Rick Perry to aid Florida's gas supply. He requested creating a gas supply reserve after the major hurricane shut down roads and has led to limited gas supplies at stations across the state." . . . . . . . .OCT 23 - "U.S. Sen. Bill Nelson, D-FL, filed an amendment Monday that would provide the U.S. Department of Agriculture an additional $3 billion in disaster assistance to help farmers who lost crops during the Hurricanes Irma, Harvey and Maria." . . . . . . NOV 14 - "U.S. Sen. Bill Nelson (D-FL) today urged Senate appropriators to include in the bill additional funding to help schools impacted, both directly and indirectly, by the storms....According to local school districts, more than 3,300 displaced students have already enrolled in schools throughout Orange and Osceola counties, while more than 600 students have enrolled in schools in Miami-Dade County." . . . . . . JANUARY 30 - “I hope our colleagues in the Senate will understand the urgency of this matter,” Nelson said. “We can’t keep pushing this off down into the future. The need to act is now.” Nelson said Florida received only $600 million of the $7.4 billion doled out in September for long-term disaster relief through the Department of Housing and Urban Development. “What percentage is that of $7.4 billion? It’s well less than 10 percent. It defies comprehension,” Nelson said. . . . . . . . . . . demonizing someone, while speaking without the facts, and lying about it (just like Donald Trump) is simply . . . . . . . . PATHETIC

It's always interesting to

Permalink Submitted by Robert Warner on January 30, 2018 - 1:51pm
It's always interesting to see the what comes out of the woodwork when sound policy, aimed at actually helping fellow citizens, is trashed by self interested, anonymous parties - that neither know nor care about reality and facts on the ground. Bill Nelson cares, and is trying to actually help, not hurt.

Permalink Submitted by Frank on January 30, 2018 - 6:19pm
Gee, some of these sound like state/local issues (and last I knew Donald Trump and the GOP were in charge of FEMA and Keys recovery) . . . . . so, take it up with Rick Scott . . . . . where has he been since last October when he declared the Keys "are absolutely open for business" . . . . . . . . . . . point your anger where its appropriate if you have complaints about Keys recovery --> Donald Trump's FEMA and state/local efforts under Rick Scott . . . . . . . after all, in his recent State of the State address several weeks ago, Rick Scott, in discussing Irma impacts, stated "And after the storm, we showed up. From handing out water, to working at food banks, so many Floridians and many of you in this room helped your neighbors in need. I believe Florida has come back even stronger" and then spent two paragraphs about Puerto Rico's citizen coming to Florida and the aid he was proposing for them (and not one mention of the Florida Keys or its residents' continuing needs). . . . . . he needs these displaced Puerto Rican's American citizen votes for his Senate run next November . . . . . . . . oh, or are Trump and Scott YOUR party and thus can't be blamed. . . . . . . . . . . . . in that case, if you're being partisan and throwing darts at members of the other party rather than at your own party, well that would be just . . . . . . . . . PATHETIC . . .

Nelson is a political hack.

Permalink Submitted by John on January 30, 2018 - 1:22pm
Nelson is a political hack. Period. This is a continuation of his attempt to BUY VOTES with the newly resettled PR's in Florida. Nelson never misses a photo op, an opportunity to get his face in front of the camera's. No doubt, Nelson is afraid of Rick Scott. And he should be. Rick Scott has rebuilt Florida. Rick Scott has overseen tax cuts, employment gains and business expansion. Bill Nelson has done NOTHING. He does photo ops. He grandstands. And he is a 100% shill for the Dem Party at Florida's expense. VOTE FOR RICK SCOTT - SEND BILL NELSON TO RETIREMENT

Florida's recovery is on par

Permalink Submitted by Rebuilt Florida? on January 30, 2018 - 1:38pm
Florida's recovery is on par with other states and the economy at large. Scott's marketing made no real discernible difference.

Permalink Submitted by Anonymous on January 30, 2018 - 1:00pm
"If we're giving free water and food, that means that families are not going to supermarkets to buy," FEMA Puerto Rico director Alejandro De La Campa told NPR on Tuesday. "It is affecting the economy of Puerto Rico. So the director of FEMA Puerto Rico is saying that our aid is affecting the economy of Puerto Rico and right away Bill Nelson blames the Trump administration for cutting off FEMA. Democrats do nothing but twist facts and spread lies.

Ironic that you accuse all

Permalink Submitted by Lulz on January 30, 2018 - 1:35pm
Ironic that you accuse all Democrats of twisting facts and spreading lies, which is itself spin and not true. The irony.

Of course Dems see a new

Permalink Submitted by jeffk on January 30, 2018 - 12:44pm
Of course Dems see a new class of vulnerable citizens they can exploit forever!! Like all the others who’ve done so well getting gov’t assistance in exchange for voters LOL

Yea, cause there are SO MANY

Permalink Submitted by Lulz on January 30, 2018 - 1:33pm
Yea, cause there are SO MANY voters in PR. Oh wait, they can't really vote! Lol. Nice try ascribing a nefarious motive to entire ideology based on stereotyping.

Listen to the Democrats