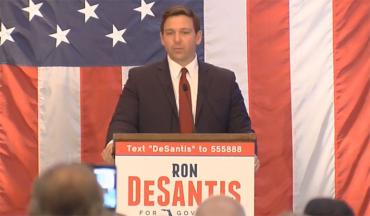 Speaking before a lively crowd at the Embassy Suites in South Florida, DeSantis first spoke about national issues and his congressional accomplishments before diving into why he wanted to run for Florida governor.

“I’ve consistently stood for a culture of life, I’ve defended the Second Amendment and I have fought tooth and nail for our military and veterans, and I am darn proud of that,” DeSantis said. “Since I got elected, I’ve been a force to try and change Washington, but I never let Washington change me.”

DeSantis said he supported defunding sanctuary cities and improving Florida’s schools -- but most of all, DeSantis said he wanted to continue building upon the legacy of current Gov. Rick Scott, who swooped into Florida politics in 2010, ousting Tallahassee insiders in one of the biggest upset elections in Florida history.

Like Scott, DeSantis painted himself as an outsider from the Tallahassee bubble, since he has spent most of his political career in Washington, D.C.

“We can’t have the insiders pick the candidate in 2018,” said DeSantis. “We need someone who is going to follow Rick Scott’s legacy and shake things up.”

DeSantis said he planned on pushing business-friendly policies if Floridians elected him governor later this year, promising to bring businesses to the Sunshine State while warning what might happen if another candidate wins the race.

“What Florida cannot afford to do is adopt policies that make it harder to do business and that drive away jobs and investment,” DeSantis said.

DeSantis also promised to lead the charge in the fight against opioid addiction, which has ravaged the lives of thousands of Floridians in recent years.

Over 5,700 people died from opioid overdoses in Florida last year, an increase of 35 percent from 2015.

“The problem is not going away,” said DeSantis, pledging to get tough on “low-life trash” peddling opioid pills across the state.

The self-declared “#1 Conservative,” DeSantis has represented Florida’s 6th District in Congress since 2013 but his name widely flew under the radar in the gubernatorial race until recent months when political insiders began speculating he would make a bid for governor.

“Congressman Ron DeSantis is a brilliant young leader, Yale and then Harvard Law, who would make a GREAT Governor of Florida. He loves our Country and is a true FIGHTER!” tweeted Trump.

DeSantis’ fellow Florida congressmen agreed he would be the best choice to represent the Sunshine State in the governor’s mansion.

“Ron is an asset to everybody that he gets to represent in Washington DC," said fellow Florida Congressman Brian Mast, R-Palm City, who kicked off DeSantis’ announcement. “He’s got a fire in his belly...when he goes to fight for something, it’s with every fiber of his being.”

DeSantis said he hoped his experience fighting for Floridians in Washington would translate to state politics.

"A governor needs to lead and I pledge I will work every day to secure Florida's future," DeSantis told his supporters. "I will fight for what is right and I will fight for the taxpayers and families of our great state."

A lot of suckups already

Permalink Submitted by jerry on January 30, 2018 - 7:24am
A lot of suckups already posted I see.. What will he say about his opponents new racist ad? ......That he follows Trump says it all.......... What a way to destroy the republican party as you race to the bottom by being fiscally and morally bankrupt. ...... That you'll argue republicans are not shows how deep on denial you all have become or support. Sad

Great. Governor Got my vote

Florida had a strong and well

Permalink Submitted by Jeff Ward on January 29, 2018 - 8:51pm
Florida had a strong and well led Republican Party long before Donald Trump appeared on the scene. Desantis is a water carrier for Donald Trump. Trump is a disaster for the Republican Party nationally, but the Florida Republican Party will recover provided we discard Trump acolytes like Desantis.

Florida had a strong and well

Permalink Submitted by Jeff Ward on January 29, 2018 - 8:51pm
Florida had a strong and well led Republican Party long before Donald Trump appeared on the scene. Desantis is a water carrier for Donald Trump. Trump is a disaster for the Republican Party nationally, but the Florida Republican Party will recover provided we discard Trump acolytes like Desantis.

As both a former line officer

Permalink Submitted by Robert Warner on January 29, 2018 - 4:39pm
As both a former line officer , and JAGC vet myself, my vote goes to an experienced credible, informed, and trustworthy candidate that has Florida and all Floridian's interests at heart - Gwen Graham.