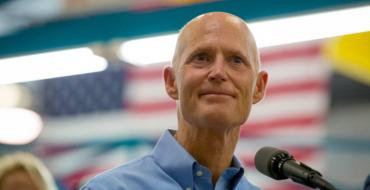 A last-minute meeting at the Tallahassee Airport turned into a political victory for Gov. Rick Scott on Tuesday when the Trump administration announced offshore drilling was “off the table” for the Sunshine State.

Added to Scott’s daily schedule was a late meeting with U.S. Interior Secretary Ryan Zinke. An hour after an email of the governor’s new schedule went out, Zinke and Scott were meeting face-to-face.

Twenty minutes after that, Scott made the announcement that Florida would not be the place for offshore drilling.

“By removing Florida from consideration, we can now focus on how we can further protect our environment, including our proposal for record funding for the Everglades, our springs, our beaches and our state parks,” Scott said Tuesday.

The announcement comes just days after the Trump administration announced it would be opening up a large area for offshore oil drilling, much to the disappointment and criticism of many politicians and environmentalists.

The announcement also comes at a pivotal time for Scott, who is widely rumored to be contemplating a bid for U.S. Senate later this year.

Scott has spent the last few years developing close ties with both President Donald Trump and his administration and is seen as one of the president’s top political supporters -- a support which seems to go both ways.

Zinke tipped his hat to Scott’s “leadership” during last year’s hurricane season and Everglades restoration, calling him “straightforward” and a “leader that can be trusted.” 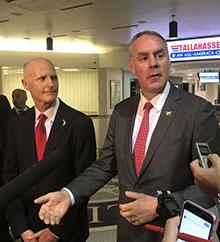 “President Trump has directed me to rebuild our offshore oil and gas program in a manner that supports our national energy policy and also takes into consideration the local and state voice,” Zinke said of the announcement.

Zinke said coastal damage from Hurricane Irma was another reason the administration was taking Florida out of consideration for offshore drilling.

“I support the governor’s position that Florida is unique and its coast is heavily reliant on tourism as an economic driver,” Zinke said.

Offshore drilling was supported by politicians from both sides of the aisle in Florida, but one public figure in particular -- U.S. Sen. Bill Nelson -- wasn’t entirely happy with Tuesday’s announcement.

It’s likely Scott will challenge Nelson in his reelection bid this year. This year is Scott's final in the governor's mansion -- his last chance to make an impact in statewide policies before voters head to the polls in November.

Nelson, who has served in office since 2001, said the decision could benefit his future rival politically -- a move he called pure politics, and nothing more.

“I have spent my entire life fighting to keep oil rigs away from our coasts. But now, suddenly, Secretary Zinke announces plans to drill off Florida’s coast and four days later agrees to ‘take Florida off the table?’ I don’t believe it,” Nelson said. “This is a political stunt orchestrated by the Trump administration to help Rick Scott, who has wanted to drill off Florida’s coast his entire career. We shouldn’t be playing politics with the future of Florida.”

Nelson’s comments confused some, since he has routinely opposed offshore drilling, the very issue the Trump administration sided with on Tuesday.

“Instead of celebrating the announcement as a win for Florida, Sen. Bill Nelson has made this about politics,” said National Republican Senatorial Committee Communications Director Katie Martin. “This move from the administration is what Floridians want, but for some reason Sen. Nelson appears he’d be happier if the decision was reversed.”

Other states have begun asking for exemptions from the offshore drilling plan as a result of Tuesday's announcement, but no further announcements have been made.

Just goes to show you that

Permalink Submitted by Colleena11 on January 11, 2018 - 1:25pm
Just goes to show you that liberals will never give conservatives a pat on the back for getting things done ! Always yelling and throwing temper tantrums ...... comical actually

I love pals in power who are

Permalink Submitted by Lynn Siebert on January 11, 2018 - 1:10pm
I love pals in power who are smart and use common sense when making policy that benefits Florida. Clean air and water is Florida's most valued asset over other coastal states and cities when it comes to tourism and where people want to live and raise their families. It is more about perception than fact, however, that oil rigs are bad. Oil rigs provide wonderful "homes" for ocean life and can bring back endangered coral reefs, fish, etc. Check out the facts. Yes, the risk of oil rig mishaps can devastate an area for years. I was living in the Santa Barbara area of California when the big oil mess occurred offshore back in the 60s. Beaches were a mess for years. The mandatory household product everyone had sitting outside their doors was turpentine to get the tar off of our feet before entering any structure. So, given the extremely fragile environmental reality that is Florida, no drilling in our backyard is the way to go.

Permalink Submitted by C Breeze on January 11, 2018 - 10:06am
THANK YOU GOVERNOR SCOTT; common sense, and the ability to reason, is why we have supported you 'all along'! On the "other hand"; the 'statement' in this article proclaimed by the "Ride-along-rocketeer-Zippy Nelson": ..."a move he ('Zippy Nelson") called pure politics and nothing more.." is indicative of the reason "he is toast" in the public arena; because he has ALWAYS been an emasculated "go along to get along" political gelding more interested in himself and his "special interest" contributors than in his FLORIDA constituents (and, without doubt, "Zippy" will be eventually hired by one of those "special interest" groups, thinking "Zippy" will give them closer access to the "Halls of Congress" and "Tallahassee's" 'back offices'...... SAVE YOUR MONEY "special interests", "ZIPPY" is a waste of your time ! ! !

He did not score a

Permalink Submitted by wow on January 11, 2018 - 8:34am
He did not score a complicated political victory, those 2 idiots are pals...