John Morgan: Independent Gubernatorial Run 'Not on my Mind,' But Not Out of the Question 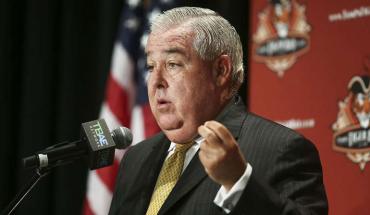 Orlando attorney John Morgan says he hasn’t given much thought to running for governor as an independent candidate, but didn’t entirely rule out the possibility in a video message posted Tuesday.

Morgan took to Twitter to elaborate on how he was feeling fresh off his departure from the party he has fundraised for and been heavily involved in for years, telling his followers he simply didn’t feel much attachment to either party philosophically.

“Over time I have found myself really looking at the two party system, Republicans and Democrats, and the truth of the matter is I find myself somewhere in the middle,” Morgan said. “..I don’t want to be pegged in either [category] so I decided it’s best for me to be independent.”

Instead, Morgan said what drives him politically is the desire to help others, calling himself a “compassionate capitalist.”

“We need to do the most for the most with the least,” Morgan said.

The orlando superattorney’s decision to leave the Democratic Party comes on the heels of several polls which have shown Morgan as the Dems’ best shot at the governor’s mansion in 2018.

Morgan, whose law firm Morgan and Morgan operates both state and nationwide, made a name for himself in 2014 and in 2016 when he spearheaded Florida’s medical marijuana initiative, becoming the spokesperson for the fight for Amendment 2.

Morgan’s desire to pass the amendment to expand the use of medical marijuana was so fervent he funneled millions of his own dollars into the campaign, raising the profile of United For Care and Morgan himself all the while.

His involvement in the medical marijuana initiative is what led supporters to push for a run for governor -- and Morgan said Tuesday he has definitely given the idea some thought, but with some hesitations.

“Earlier this year on the heels of a successful ballot initiative…[a run] was the furthest thing from my thought,” Morgan said. “The response to me and what I think and how I believe is overwhelming. But to run for something like this you have to really have a fire in your belly.”

Some days the idea of leading Florida is appealing to Morgan. Other days, he said he’d much rather be sitting on the beach simply enjoying life.

“There are some days I woke up and was 100 percent I’m going to do it, and there were days where I woke up…where I go, my God, this will be a lot of work,” Morgan explained.

Morgan has previously told Sunshine State News he has some reservations about the campaigning process and what the job as governor might entail on a day-to-day basis, since the job entails much more than just the title of governor.

“Is it my ego that’s driving this or is it my desire to make a difference? I have a huge ego and I have to make sure that’s not what’s driving this train,” Morgan said. “The final thing is do I want to be dealing with minutia. I don’t want to deal with little issues.”

Morgan was a shining light for the Democrats in what is likely going to be a tough battle for the governor's mansion next year. Many Democratic gubernatorial candidates are struggling to raise money and compete with their GOP opponents and none of them have quite the same name recognition as Morgan.

Still, it appeared Morgan hadn’t totally ruled out the possibility of running as an independent candidate. Independent voters currently make up 3.4 million voters in Florida and are often considered critical to swing elections toward either the Republican Party of Florida or the Florida Democratic Party, whose registration numbers are separated by about 300,000.

But at the end of the day, Morgan said right now running for governor wasn’t necessarily the first thought on his mind.

“I have no clue or no thought about [a run] right now,” he said.

Republicans Say Dems in Trouble Without John Morgan in the Mix

John Morgan's Lifestyles of the Rich and Famous

I don't think money will play

Permalink Submitted by The Trapper on November 30, 2017 - 9:54am
I don't think money will play that much of a role except for presumed Democrat, the Python King. The Democrats are broke. I don' think Rick has the ill gotten gains that Johnny has, but he ain't broke either. And Rick has the power of the incumbent. It is a big help these days not to be accused of grabbing staffers asses. Do not think Rick guilty of that. Course, I could be wrong. The hurricane probably worth $50 million in free publicity to Rick. While he battled for Floridians not to drown. "Do not drive into water you don't know the depth of!". Reminded me of Mom telling me to look both ways before crossing the street. Course, I was six. Rick has been campaigning for two years. And, regardless what you think of him, he is not dumb. Morgan doesn't have a prayer.

He will attempt a run as an

Permalink Submitted by Mark on November 30, 2017 - 9:39am
He will attempt a run as an independent hoping his money will buy him the post!

Permalink Submitted by The Trapper on November 30, 2017 - 7:50am
Morgan one more putz scumbag lawyer. Studied at the knee of North Carolinas premier scumbag wannabe president lawyer, John Edwards. I don't think we have to worry bout Johnny. I say it is a 2-5 shot some young lady will emerge from the woodwork with some horrid tale bout some horrid behavior some drunken night. Johnny be a big fan of himself and the bottle. I feel a little like Monk. I might be wrong. But I'm not.

What a phoney ! (There's

Permalink Submitted by C Breeze on November 29, 2017 - 7:10pm
What a phoney ! (There's more chins there than in a Chinese restaurant !) "I will but I won't"... "I want to but I don't"... "Not on my mind But not out of the question"... "A compassionate capitalist with a passion to help others"... "I'm switching to "Independent" cause I'm somewhere in the middle"... You talk out of both sides of your mouth "lawyer-like", and you would run as an "Independent" third party "spoiler" (which is also "lawyer-like"). Do us all a favor if you "really have a desire to help others" John: Stay the hell out of politics and stay home [We already have far too many "lawyers (sans portfolio)" screwing up government at ALL levels ! ]

I would NOT trust Morgan as

Permalink Submitted by Mark on November 29, 2017 - 4:15pm
I would NOT trust Morgan as far as I could tinkle! The man IS a proved liar, and while he's made millions, is still a manipulative and crumby businessman, along with many of the lawyers associated with him. MY opinion, MY vote, NOT for him!

There must be some good

Permalink Submitted by Bill on November 29, 2017 - 1:56pm
There must be some good people who can help you with the details, maybe a couple of Lt. Governors with the power of the Governor behind them.

shrewd move, as the state

Permalink Submitted by it is on November 29, 2017 - 1:22pm
shrewd move, as the state leads in NPA voters, and he would likely funnel off a large slice from both parties... I'd like to see it happen, just to get rid of the idiots currently driving the train off the tracks...