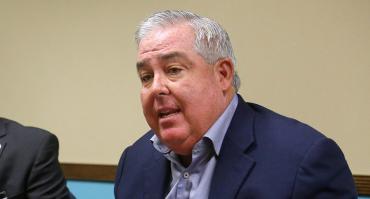 Once rumored to be a possible frontrunner for the Democratic gubernatorial nomination, Orlando superattorney John Morgan is leaving the party.

Morgan made the announcement in a series of tweets posted Friday morning.

“Spent all of Thanksgiving with my whole family,” Morgan wrote. “While it’s amazing to be leading the polls for Governor without being a candidate I can’t muster the enthusiasm to run for the nomination.”

Morgan’s epiphany to leave the party, he said, was spurred from an overall blasé attitude about the state of current politicians.

Both the Republican and the Democratic parties, Morgan said, didn’t offer much to keep him affiliated with any party.

“I can’t muster enthusiasm for any of today’s politicians. They are all the same,” Morgan said. “Both parties.”

Morgan then announced he planned to register with the Independent Party instead.

“When I vote, [I will] vote for the lesser of two evils,” Morgan wrote. “And if I ever ran, run as an Independent.”

Morgan has been rumored to be contemplating a run for governor for months, with many of his supporters pushing him to join the pack of candidates all vying for the top job in Florida politics.

Despite leading the field in Florida gubernatorial polls, Morgan would have joined a growing contest as a Democrat.

The Republican list of candidates is slightly smaller but still stands to grow. Commissioner of Agriculture Adam Putnam was the first Republican candidate to jump in the race while state Sen. Jack Latvala, R-Clearwater, has also announced he will be seeking the GOP nomination.

House Speaker Richard Corcoran, R-Land O’Lakes, is also rumored to be mulling over a bid, as is U.S. Rep. Ron DeSantis.

Morgan told Politico Florida he thinks U.S. Sen. Bill Nelson should also jump in the race, saying he could have a “legacy” he would not otherwise have in the Senate.

Morgan has not ruled out a run for governor as an independent candidate, but the Orlando attorney has said he’s confident he would sail past other candidates if he ran in 2018.

“I think I could make the case better than most because what I do for a living is make cases,” Morgan told SSN. “I have the ability to simplify things where people can understand it in real terms."

Morgan has previously told Sunshine State News he has some reservations about the campaigning process and what the job as governor might entail on a day-to-day basis, though.

“Is it my ego that’s driving this or is it my desire to make a difference? I have a huge ego and I have to make sure that’s not what’s driving this train,” Morgan said. “The final thing is do I want to be dealing with minutia. I don’t want to deal with little issues.”

Though he has often been a prominent Democratic fundraiser, Morgan would have to raise a significant amount of money to fund a gubernatorial bid.

Several candidates have already raised millions of dollars for their campaigns.

Putnam and Levine topped their opponents in October committee fundraising, each raising a high six figures for their bids. Putnam currently has $12 million cash on hand and Levine has $5.4 million in the bank.

Other candidates like Gwen Graham have already raised close to $2.5 million, but other Democrats -- like Gillum and King -- have failed to gain much momentum in the fundraising game.

Levine said he is prepared to spend up to $25 million on his bid for governor.

John Morgan's Lifestyles of the Rich and Famous

Does he think the two party's

I will vote for you no matter

Permalink Submitted by XDebra Perez on January 9, 2018 - 4:58pm
I will vote for you no matter what party you are in or not a party.you have my vote for sure

Permalink Submitted by Bill on November 27, 2017 - 6:12pm
Like myself there is no party, the party is over, it is time to face reality. 70% of the Florida voting population have said clearly in an amendment to the Florida Constitution that medical cannabis will become legal. Those that hide behind the laws only hasten their political end. I would like to Thank John Morgan, for his passion, for his commitment and for the power of his money, may I remind him that in the halls of memory, and the halls of Justice is where you belong.

"In the Senate he

Permalink Submitted by Tallywally on November 27, 2017 - 12:21pm
"In the Senate he accomplished nothing" - of Bill Nelson Now thats a TV commercial right there for Rick Scott. LOL

John do a coin toss heads or

Permalink Submitted by Bill on November 27, 2017 - 9:23am
John do a coin toss heads or tail it doesn't matter you will win no matter what stripes you choose.

Correct me if I'm wrong, but

Permalink Submitted by Danny j on November 27, 2017 - 9:01am
Correct me if I'm wrong, but independent is not a party. It's the absence thereof.

Why does he, or anybody else

Permalink Submitted by Bob H on November 28, 2017 - 8:38am
Why does he, or anybody else for that matter, need to be in a party. Party politics are a thing of the past. If this COUNTRY is going to prosper, it needs to abandon party politics. Run as an Independent, John. You'll get my vote.

have been NPA for some time

Permalink Submitted by say it on November 27, 2017 - 8:39am
have been NPA for some time now, until the Independent party gets straightened out on a filing snafu... More like a Republican coup to bury the largest threat to their stranglehold on FL politics, bunch of carpetbaggers...until then, Independents were the fastest growing party in the country...telling stat.

Then WHY isn't "Independent"

Permalink Submitted by C Breeze on November 27, 2017 - 12:29pm
Then WHY isn't "Independent" a "voter registration choice", like in OTHER States?!?!? (What's up with "No Political Affiliation"??......Are you kidding me with THAT ? That's what made me stay a "despicable Democrat" for THIS long.... THAT socialist Party has left me...and YOU !

Because Florida clings to

Permalink Submitted by Bob H on November 28, 2017 - 8:43am
Because Florida clings to party politics. Demand action from your legislators. I refuse to side with either of the two. Both sides are despicable, uncaring and rich (to our poor). If we don't demand change, it'll never happen. Party politics are a thing of the past. Time to move forward.

Actually have to respect his

Permalink Submitted by Eye See on November 26, 2017 - 2:53pm
Actually have to respect his admissions about his ego , and disdain for the day to day minutia . Basically an egotistical glory hound . That’s ok — especially since he has the good sense to know why it’s not a great idea to run - - because he just might win , and heaven forbid , then what ??

He's finding out that he can

Permalink Submitted by Teddy on November 26, 2017 - 11:20am
He's finding out that he can lose business claiming a party. I know I wouldn't hire him as a Democrat.

You folks up early today and

Permalink Submitted by The Trapper on November 26, 2017 - 8:52am
You folks up early today and obviously kept your powder dry. I just don't have much to add. Hopefully this does not mean that John is going to be a Republican now and embarrass us even more than we have been. Gotta run. Writing a letter (the same one) to Bill and Marco. Stop eating dogs and cats and RELEASE THE NAMES of the perverts that used tax dollars to shut up women that congressional members assaulted. No response or no action leaves me no choice but to believe You are on the list. As for all the worthy folks agin eating dogs and cats...I am with you in spirit. But before attacking the world I suggest you start with N. Korea. Latest reports indicate that the there are no dogs left and less than 100 cats. On the edge of extinction. Go where you get the most bang for your buck.

I'm sure you meant "The most

He has my Republican vote.

Permalink Submitted by Bill on November 26, 2017 - 8:44am
He has my Republican vote. Don't sweat the small stuff, but you must remember to drain the swamp in Tallahassee.

Permalink Submitted by C Breeze on November 25, 2017 - 9:22pm
ME TOO John!!!...But, not just yet... I've been enjoying the "meltdown" just too damn much ! You'd have failed anyway; and repetitive failures are just so demoralizing... (Just ask ANY "far-left of center" Democrat). {and "Nepotistic Gwen" will soon enough learn that too.. just she "backed out" of the Panhandle when she saw the futility of a re-run there}

Permalink Submitted by army op's vet on November 25, 2017 - 9:01pm
Ha....Johnny the Ambulance Chaser leading Polls ...Ha...what Polls??? the Left Wing Predators & Perverts on Women....He left party Because Democrats are way low on Polls.....Far as Wanebe Astronaut NOT..Billy Nelson Governor of Florida....Ha...you been smoking to much of that Weed you tried to Legalize ...Billy Nelson & Johnny Morgan...your Play time in playground is OVER....You can Join Hillary & now Blame everyone Else for You political.B.S. losing in your Party must less the Whole U.S......BYE BYE...

Bob White is also running on

Dems are clueless with a cast

Permalink Submitted by David Manning on November 25, 2017 - 7:32pm
Dems are clueless with a cast of criminal candidates a mile deep. Wasserman-Shultz is the face of Florida Dems.

A scary "Medusa face" for

The bigger issue is that the

Permalink Submitted by Boca Boomer on November 25, 2017 - 6:41pm
The bigger issue is that the Dem's penchant to embrace far left/socialist agenda has finally alienated the few remaining centrists. It is now the party of Bernie, comrade. Despite what skewed pollsters and mainstream media may say to mis-shape reality as they foolishly tried to do for Hillary, the midterms will be a Republican rout of the incredibly clueless!!!!

Morgan will only run to split

Permalink Submitted by Daniel on November 25, 2017 - 5:29pm
Morgan will only run to split the votes to give Gwen Graham any chance she has to win. Otherwise, no chance to beat Putnam. Now we know who Morgan really is, and early. Good!!

I don't think even an honest

Permalink Submitted by Diane on November 25, 2017 - 5:26pm
I don't think even an honest Republican would say Bill Nelson is as evil as Trump. I can't even think of a Democrat who might fit that bill. Mr. Morgan should have investigated before burning that bridge. Apparently he doesn't know there no longer is an Independent Party in Florida.

The first part of your

Permalink Submitted by Daniel on November 25, 2017 - 5:32pm
The first part of your comment is hilarious! You're truly a TURD. Trump Unhinged Resistance Disorder.

Permalink Submitted by C Breeze on November 25, 2017 - 9:30pm
"Turd"? "Daniel", you're a moron (That's a two syllable word; so you better get out your dictionary and look it up; Will your education NEVER cease ?!?

C BREEZE You are so good with

Permalink Submitted by Daniel on November 27, 2017 - 12:40pm
C BREEZE You are so good with the words and putting them together.