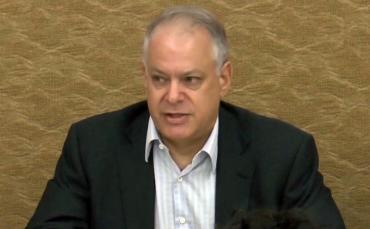 Less than a year after taking the job, Florida Democratic Party chairman Stephen Bittel is calling it quits, resigning amidst allegations he made “inappropriate” and “creepy” comments to six female staffers and consultants.

The allegations were first reported by Politico Florida.

Bittel admitted his personal situation had become “distracting” to the core mission of electing Democrats and decided to step down just before noon Friday.

“I am proud of what we have built as a Party and the wins we have had for Florida families, but I apologize for all who have felt uncomfortable during my tenure at the Democratic Party,” Bittel said in a statement.

Bittel said he was working with party leadership to set a date to find his replacement.

FDP Vice Chair Judy Mount will take over for Bittel until a permanent replacement is decided. Mount has said she intends to run for the position.

The women, who contacted Politico Florida, said chairman Stephen Bittel repeatedly made “inappropriate comments,” gazing at young women and even inviting some to live the high life and hop onboard his private jet.

Between the comments, leering and invites to sail the skies with Bittel, the women say the FDP chair had created an unprofessional work environment.

Though the women said they were never touched inappropriately, fears of the possibility still existed. The women told Politico they did not want to be alone with Bittel.

Bittel’s body language and remarks, they said, did the talking for them.

And that’s not to mention the breast-shaped squeeze ball Bittel has been known to keep on his desk.

“There was a lot of boob stuff in his office,” said a former Democratic fundraiser. “I was told by other women not to go into his bathroom. I was warned.”

Other women said they found Bittel “demeaning,” saying he had a reputation among party loyalists and staffers who all knew what might happen if a woman was left alone in his company.

Calls for Bittel’s resignation flooded in Friday morning, with all four Democratic gubernatorial candidates calling for him to step down while former party chair Allison Tant joined in the chorus.

Bittel just recently took the reins of the state Democratic Party, beginning his term to replace Tant in January.

A real estate investor, Bittel has some serious jingle in his pocket and was well-known for being a prominent donor to the party before he decided he wanted to become chair. He’s tight with top Democrats like U.S. Sen. Bill Nelson and former Democratic National Committee chairwoman Debbie Wasserman Schultz and has held numerous fundraisers for the national party throughout the years.

Bittel’s term has not been entirely without controversy, though. In June, he was ready to tender his resignation after he made racially-tinged criticisms about the state legislative black caucus over the summer.

The night’s schedule had fallen behind and Bittel was trying to speed up the speakers. Two Democrats — Senate Minority Leader Oscar Braynon (who is black) and House Minority Leader Janet Cruz — were cut from the program as a result.

The black legislative caucus was unhappy about Braynon being axed from the event, to which Bittel said “the black caucus members were acting like three-year-olds and childish.”

Friday’s allegations come at a time when extra focus is being put on political officials and lawmakers, some of whom have also been accused of sexual harassment, misconduct and inappropriate behavior.

Former Sen. Jeff Clemens resigned from office last month after controversy broke out due to an extramarital affair with a Tallahassee lobbyist. Sen. Jack Latvala, R-Clearwater, is also facing allegations from six women that he groped or sexually harassed them in Tallahassee.

As long as "this stuff"

Permalink Submitted by C Breeze on November 18, 2017 - 8:41am
As long as "this stuff" continues to be "part of the 'replacement news' that keeps the media in "survival mode"--- instead of "legitimate Law Enforcement Investigations", [rather than merely a "political exercise"],... there will be no escaping it, short of an "EMP Strike"...... SO, your "daily beatings" will continue until then... BRACE yourself: the "gender wars" continue...

DJT has done nothing wrong.

Permalink Submitted by Gereral Anoose on November 17, 2017 - 8:30pm
DJT has done nothing wrong. MAGA! GO Roy Moore! He is saintly too! DEMONcrats... Well they act as they are POSSESSED

It is an interesting

Permalink Submitted by RGB on November 17, 2017 - 2:08pm
It is an interesting transitional period. Women have a better foundation to bring forth actions which had occurred. There might be some false and or historic information, but it's coming out. As with ALL accusations the TRUTH should be sought....there are times when reform has occurred or the statute of limitations should have run out. It also must be recognized that a transition is a change from one setting to another. In this new setting, I do not doubt that there will be situations of inappropriate actions taken by women with men in the future. After the fear of ridicule and retribution pass for the men which WILL be subject to inappropriate actions by women. Expect the shoe to be on the other foot. The Old Guard of men raised in a different society will evolve or pass. When they do the metro-sexual males will not feel inhibited as us old farts might. We need to evolve, but with the power shift of which we are speaking, it will take time for those new to the power to learn not to abuse it.

We need to evolve? You need

Permalink Submitted by Dan on November 17, 2017 - 2:49pm
We need to evolve? You need to evolve, perhaps. Some of us actually are gentlemen and can control our libidos. You can be the typical beta-male and I will happily remain the well mannered Alpha that I am.

So now Men are being forced

Permalink Submitted by Bob Luna on November 17, 2017 - 2:05pm
So now Men are being forced to resign for their thoughts and for looking at a woman.

I think the boob squeeze ball

Permalink Submitted by shar on November 17, 2017 - 2:44pm
I think the boob squeeze ball may have helped.

Yea, no doubt C Breeze has a

Permalink Submitted by The Trapper on November 17, 2017 - 1:08pm
Yea, no doubt C Breeze has a handle on things. The end of this will be no more pretty young girls hired in DC regardless how much money their dad has or contributed. No longer worth the risk or downside. Here on in will be the heyday of the fat, ugly, smart girls with glasses.

I agree with C Breeze!

Well, I'll give you this

Permalink Submitted by C Breeze on November 17, 2017 - 12:19pm
Well, I'll give you this Stephen: You did something that your your cowardly political ilk (like Al Franken, Robert Menendez, The Clintons, etc..., can NEVER muster the courage to do) : "Fall On Your Sword"! {You DO get "points" for THAT, in "We The Peoples' Book"}

Goes to show what a fucking

Permalink Submitted by Voted yes on 2 on November 17, 2017 - 5:42pm
Goes to show what a fucking hypocrite you are. You forgot to include Mr Roy Moore and Donald Trump. They both were accuse of the same act. Your comment would have credibility if you added them.

BUT, I don't even know you