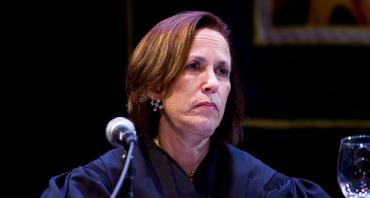 In May 2012, during a retention campaign speech, Pariente told a gathering at Temple Emeth Delray Beach that "a vote yes will be a vote to retain me and the other two justices [Fred Lewis and Peggy Quince]. A vote no will give Governor Scott the right to make his appointments, which will result in partisan political appointments."

Pariente's speech drew an immediate response from anti-judicial activists, but none more outraged than Jack Thompson of Coral Gables. Thompson fired off a letter of complaint to the Judicial Qualifications Commission accusing Pariente of misrepresenting the judicial retention and appointment process. "... Her attacks on a co-equal branch of government make it a narrow argument about herself," he said.

Even the temple room where Pariente spoke was an issue in 2012 -- reportedly paid for by Henry Handler, a former Palm Beach County Democratic Party chairman.

Pariente's remarks, Thompson's complaint and Philips' reaction were reported first in the May 29, 2012 edition of Sunshine State News.

It is that 2012 speech that compelled the government watchdog group Foundation for Accountability and Civic Trust (FACT) to call for Pariente's disqualification -- along with Labarga's -- in the case deciding Scott's appointment powers. Here is FACT Executive Director Kendra Arnold's statement, issued Saturday:

“Judicial temperament that includes threatening lawyers short and long-term as Justice Labarga has done, attacking other public officials in the midst of a political campaign as Justice Pariente has done, and now attacking members of the state’s Judicial Nominating Commission, destroys public faith in the courts.  Such behavior betrays that certain judges are biased and the citizens of Florida cannot get a fair shake, much less justice, before certain judges.

"Both Justice Labarga and Justice Pariente have exhibited behavior that should disqualify them from hearing the case brought by politically motivated organizations who want to prevent the governor from filling vacancies on the Florida State Supreme Court. Moreover, Justice Pariente has previously expressed her opinion that she did not want the governor to make judicial appointments –- the very issue in the case before the court.  Both justices should immediately recuse themselves from this case as they have demonstrated a bias against the governor.”

The critical issue at hand is whether Scott or the next governor has the constitutional right to make judicial appointments. The court now is weighted in favor of liberal decisions -- Pariente, Lewis and Quince, all considered liberal. The three will be past age 70 next year and set to retire on the same day Scott leaves office.

Labarga and Pariente's sketchy comments as they poured over a then-unidentified list were caught Nov. 1 on a live microphone. They were "exchanging banter" over a list of Scott’s appointees to the Supreme Court Judicial Nominating Commission and they followed oral arguments in the petition filed by left-leaning League of Women Voters and Common Cause. The groups are arguing against Republican Scott appointing the three justices.

Then, last week Politico uncovered a 2007 open microphone audio in which Labarga, as a Palm Beach County judge, was "hammering an attorney who tried to have him removed from a case. Labarga’s comments at that time also implied that judges seek retribution when crossed by attorneys." See the story here.

Meanwhile, the governor has not decided whether he will ask the justices to recuse themselves. He told reporters last week he first wants to "find out what's going on” but he absolutely “expects judges to be impartial ... to simply do their job.”

The remarks by the two

Permalink Submitted by Barney Bishop III on November 15, 2017 - 2:49pm
The remarks by the two Justices of the Supreme Court are anathema to what a jurist is supposed to stand for: honesty, integrity, fidelity to the law...comments such as these would demand recusal and if they don't do that, then a higher court - federal - will have to rule on the issue...we all know that Justices/Judges have their bias...but to make that known with comments or threats is enough to get jurists in trouble...and the Florida Supreme Court has been holding other judges accountable for their words and deeds. Now is the time to turn the tables and take their own medicine.

this is all politics, this

Permalink Submitted by it is what it is on November 15, 2017 - 12:24pm
this is all politics, this would not even be an issue if Scott did not try to pull a fast one and nominate judges when he is no longer in office and they have not officially left. As an independent, they are both shameful...

Actually, if you read about

Permalink Submitted by Mike on November 15, 2017 - 12:52pm
Actually, if you read about the issue, you would see that it is not about pulling a "fast one" and more about the overlapping of the terms. Scott has not even made any movement on this (not to say that he won't). But to blame this on Scott at this point is jumping the gun.

She and her friends needed to

Permalink Submitted by Sandra Wiatrowski on November 14, 2017 - 5:16pm
She and her friends needed to be gone long ago.

I am as outraged as the rest

Permalink Submitted by The Trapper on November 14, 2017 - 6:59pm
I am as outraged as the rest of you. One of the oldest lawyer jokes..... A good lawyer knows the law. A GREAT lawyer knows the judge.

Stupid me. I thought that ALL

Permalink Submitted by Tampaguy on November 14, 2017 - 4:13pm
Stupid me. I thought that ALL JUDGES were SUPPOSED to be apolitical... sure, appointed by "Politics" process, but they should be "Judging using LAW", not politics.

Permalink Submitted by The Trapper on November 14, 2017 - 1:10pm
Yea, well, lets just say they are without honor or integrity and are not going to recuse themselves. And get back to the good stuff like Roy Moore. Once Gloria Allread is involved someone is writing a check. Since all these women are trailer park trash....who is it?

Permalink Submitted by Looking for Justice on November 14, 2017 - 11:27am
Justices Jorge Labarga and Barbara Pariente should recuse themselves from this case. They are so clearly and unquestionably biased it is embarrassing to anyone of integrity in the Judicial system. They cannot be allowed to pervert the system. If they don't recuse, they are without honor and should be removed.

I wouldn't pin a lot of

Agreed. AL is about to show

Permalink Submitted by Looking for Justice on November 14, 2017 - 11:30am
Agreed. AL is about to show his true colors.

Not sure what this means but

Permalink Submitted by Tallywally on November 14, 2017 - 1:13pm
Not sure what this means but you obviously dont know Alan Lawson if you think he will not stand up against BP.

Permalink Submitted by Tallywally on November 14, 2017 - 10:57am
She has behaved like a tyrant for years on the bench. She is above the law. Nobody has ever written a story on how she and League of Women Voters president Goodwin vacationed together during the time the redistricting cases were filed and she knew the cases would be coming before the court. Lets hope Alan Lawson will call the question on her partiality. She is biased and should recuse herself and her 2012 comments should unquestionably lead to a recusal.