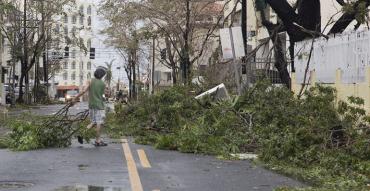 Florida is opening its doors to Puerto Rican teachers and students displaced by Hurricane Maria, a Category 4 storm which ravaged the American territory last month.

On Friday, Gov. Rick Scott and the Florida Department of Education announced they would be waiving certain requirements for students and teachers hoping to work or continue studying in the wake of the monster storm.

Many Puerto Rican teachers lack the required records to enroll or teach in Florida public schools because the records were either left behind in haste or destroyed in the storm, so the department will begin waiving educator certificate application fees for Puerto Rican teachers hoping to work in Florida, the country’s closest American neighbor.

Requirements to provide official transcripts documenting the receipt of a bachelor’s degree or higher to teach will also be waived, as long as teachers can provide unofficial copies of the transcripts.

Over 250,000 students are currently enrolled in college in Puerto Rico, where many areas are still without potable water and electricity.

“As Puerto Rican families work to rebuild their lives following the unbelievable devastation caused by Hurricane Maria, we are doing everything we can to help them throughout this process,” Gov. Scott said in a statement released Friday. “We will continue to work together to make sure Puerto Rican families have all the support they need.”

Hundreds of thousands of Puerto Ricans are expected to come to Florida in the coming months, evacuating the badly-damaged island while hoping to start a new life in the Sunshine State.

The uncertainty of when, exactly, Puerto Rico will recover from the storm was part of the reason Commissioner of Education Pam Stewart said the department was welcoming new students and teachers to the state.

“Entire communities were destroyed and we do not know how long it will take to restore schools and other essential infrastructure,” Stewart said. “It is critical that these students and teachers have the opportunity to participate in our state’s outstanding public education system. We are pleased to remove barriers to enrollment and help these students and teachers return to the classroom.”

CBreeze on a hot scent and

Permalink Submitted by The TrapprT on October 8, 2017 - 8:38am
CBreeze on a hot scent and following the right trail. Do the teachers have to speak English? Suppose they will not need their birth certificate to get a driver license? The same as the nonsense with bussing kids to school to integrate. The same as affirmative action. "We don't expect you to do as well as white kids because, after all, your great -great- great -great- grandmother was a slave." Odds are she wasn't a very bright slave. We already have myriad gun control laws. The fact remains that you can't help stupid and you can't fix crazy. Regarding the mess in Puerto Rico. The mayor of San Juan- that got in a pissin contest with Trump over the speed of her getting our checks- TURNED HER BACK at her inauguration when the question posed was "WILL YOU SUPPORT THECONSTITUTION OF THE UNITED STATES?. Kind of like taking a knee. T

I support the 2nd Amendment,

Permalink Submitted by Sally on October 7, 2017 - 6:24pm
I support the 2nd Amendment, but there needs to be control over the ability to have semi automatic weapons. My aunts friend died in Vegas. You CBreeze should be ashamed of yourself.

Permalink Submitted by C Breeze on October 7, 2017 - 9:56am
"Waive "required credentials" ?????... This is just one more step direction in the "dumbing-down" of Florida's education process and its continuing "student fail rate". This "type of retro-thinking" also propels us further along towards the slippery-slope of "Hispanic 'South' Florida second-state solution"... WHAT NEXT?...waive (or ease) restrictions against "Sharia law" so Muslims escaping five thousand years of tribal warfare can feel more comfortable in America's western culture, and "fit" alongside OUR society and legal system?? (Think "AMERICA FIRST" you political "lite-hits" [veterans will understand this term..]...)

Permalink Submitted by Anonymous on October 7, 2017 - 10:04am
Wow.... your paranoia enables you to connect any disaster to your Anti-Muslim minset....kind of amazing

Permalink Submitted by C Breeze on October 7, 2017 - 12:23pm
Isn't "Freedom of Speech" GREAT ? Well, enjoy it "Anonymous", because after the liberal Democrat lemmings destroy the 2nd Amendment,..the 1st Amendment is NEXT ! (So denigrate me while you still might..)