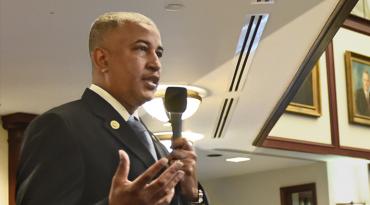 A trial was due to begin Monday in U.S. District Court in Orlando in a case that alleges former state Rep. Dwayne Taylor, D-Daytona Beach, improperly used campaign funds for personal expenses.

Taylor, 49, who served in the state House of Representatives from 2008 to 2016, was indicted in March on nine counts of wire fraud. Read the indictment here.

If convicted, he will face up to 20 years in prison on each count.

The trial is scheduled before U.S. District Judge Carlos Mendoza, according to an online docket.

Taylor is accused of falsely reporting thousands of dollars in expenditures to the state of Florida during his 2012 and 2014 re-election campaigns, the indictment said.

It alleged, in part, that Taylor “would withdraw cash from the Dwayne L. Taylor Campaign Accounts at automated teller machines (ATMs) ... and, within minutes or hours, deposit the same or a similar amount of cash into one of (his) personal accounts.”

Under Florida law, it is illegal to use campaign money to defray normal living expenses.

The unusual circumstances in the trial include a witness list that has Taylor's former district secretary, Shanee Green, testifying for the prosecution, but Judy Mount, who currently works for Democrats in the House, listed as testifying for Taylor.

Mount is also the current 1st vice chair of the Florida Democratic Party. 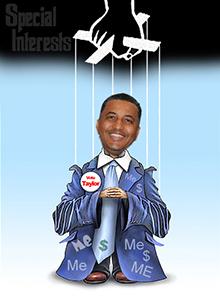 While Taylor served four years on the City Commission, the Daytona Post editorialized frequently against him. On Oct. 10, 2008, the newspaper wrote, "Despite mounting corruption complaints against the Daytona Beach City Commission, including a failing grade in a state audit that revealed multiple ethics violations and widespread misuse of taxpayers funds, Commissioner Dwayne Taylor is running for election to the Florida House of Representatives."

The paper called his record on the City Commission "abysmal," having "approved every measure that raised the tax burden of Daytona Beach citizens while awarding millions of dollars to multi-millionaire campaign contributors and friends to fund various pet projects and personal hobbies."

The paper credited his victory over much better qualified contenders to a large campaign chest "heavily funded by special interests in Daytona Beach." In the final 2008 election he faced independent Maureen Monahan. Monahan couldn't compete financially. She "rejected funding by special interests which demanded that she be sympathetic to their businesses and causes in exchange for financing her campaign," the newspaper said.

After four terms, Taylor left the Legislature in 2016 because of term limits. Though he first announced he would run for Volusia County Commission chair against Republican Jason Davis, he changed his mind; instead, he ran unsuccessfully for Congress, losing in the District 6 Democratic primary.

In a similar case, former Rep. Reggie Fullwood, a Jacksonville Democrat pleaded guilty last year to one count of wire fraud and one count of failure to file an income tax return. Fullwood was sentenced Feb. 7 to six months of home detention followed by federal supervision for the fraud and tax convictions that forced him out of Florida’s Legislature.

For successful and effective

Permalink Submitted by C Breeze on August 29, 2017 - 5:03pm
TOO bad Dwayne; We'll send you a cake with a file in it to your prison cell (The cake will probably be stale (like your Representative assignment), and the "file" will be your "prison record"...). Oooo...Stay away from the "skinheads" Dwayne...! (No sympathy here...or there !)

This is a "common practice"

Permalink Submitted by C Breeze on August 29, 2017 - 11:02am
This is a "common practice" used by all manipulative politicos; convict them and jail them as an abject lesson to ALL who would abuse Citizens, the Tax Code and the election process ! This is why, even the BIGGEST FEDERAL politicians come into office "pure of mind', idealistic, and anxious to "solve problems for the people"....and LEAVE office far richer and progressively more corrupt than they arrived at it...and carrying out their "left over campaign contributions" along with them... after additionally having made laws precluding them from being prosecuted for crimes that "average citizens" are jailed and convicted of (Think: Martha Stewart, convicted and jailed for Stock market "insider trading"). What YOU see folks, is ONLY a modicum of the corruption "politicians" are susceptible to from "outside influences" (Make your OWN lists of what "those temptations" might obviously be...and amaze yourselves at your OWN lists and how many public figures "fit that "Bill")

Nancy, why don't you walk on

Permalink Submitted by Corey on August 28, 2017 - 11:21pm
Nancy, why don't you walk on over to the Florida Elections Commission and see about another complaint that may be similar to Dwayne's "problems". Also, look and see who has not filed their Form 6 to the Florida Ethics Commission?

Okay Nancy, why aren't you,

Permalink Submitted by Mark on August 28, 2017 - 6:04pm
Okay Nancy, why aren't you, or the SSN calling for this clown to lose his State pension? Remember, after serving 3 years he's vested!