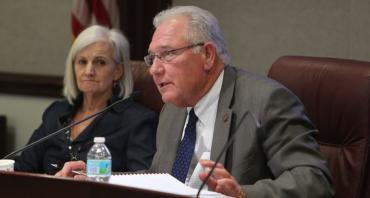 Former State Sen. Greg Evers died suddenly and unexpectedly Monday evening in a car crash, causing a wave of reactions from throughout the state.

Evers died when his car veered off the road and crashed into a canal in Okaloosa County near his home of Baker in the Florida Panhandle.

Evers served in the state legislature for over a decade, first hitting the political scene in 2001 when he was first elected to the Florida House of Representatives.

Evers transitioned from the House to the Senate in 2010, where he served Northwest Florida until 2016.

Evers’ family members said they were “devastated” by the sudden and “shocking” loss of the former state senator and strawberry farmer.

“To many, he will be remembered as an advocate, representing Northwest Florida for 15 years and championing causes, such as criminal justice reform and higher pay for state employees. Greg was a tireless force for his constituents and ‘working folks’ across Florida,” the family said in a statement Wednesday. “His personality was larger than life, with a signature wit and a toothy grin.”

Here’s how Florida has reacted to the news of Evers’ death.

Gov. Rick Scott
“My wife Ann and I are heartbroken after learning of the passing of Senator Greg Evers. Our thoughts and prayers are with his wife, Lori, and their entire family during this terribly difficult time. A dedicated public servant, Senator Evers truly loved Florida and devoted his life to serving his community – not only on his family farm, but during 15 years representing the people of North Florida in the state House and Senate. He will be remembered and missed by all who knew him as the kind, hardworking farmer from Milton who tirelessly fought for Florida families.”

U.S. Rep. Neal Dunn, R-Fla.
“I was saddened to hear the tragic news of Senator Evers’ passing this week. Senator Evers was a true patriot who served Northwest Florida for more than 15 years in the Florida House of Representatives and the Florida State Senate, where he worked to implement conservative ideals in our great state. He was a stalwart defender of the Second Amendment, fighting for the rights of every Floridian to keep and bear arms. May his family and friends find peace in knowing he dedicated his life to tirelessly serving the people of Northwest Florida, and for that we will forever be grateful.”

Senate President Joe Negron, R-Stuart
Greg passionately represented his district for many years in both the House and Senate.  He was especially dedicated to the men and women of his community who were serving or had served in the military, as well as our fellow Floridians across the state who serve as Corrections Officers.

Sen. Dennis Baxley, R-Ocala
“I had the privilege of serving with Senator Greg Evers when we were both members of the House, where we worked together on legislation we both felt passionately about. After he went to the Senate and even after he left office, we continued to work on issues of importance to both of us, and I always enjoyed the camaraderie and fun we had as we served our constituents. I am deeply saddened by his passing and extend my condolences to his family. They are in my prayers.”

Sen. Doug Broxson, R-Gulf Breeze
"Senator Greg Evers was a leader who had an impact on Tallahassee rather than the other way around. Throughout his time in both the House and the Senate, he remained grounded by his roots as a farmer from Baker; the system did not change him. He was a great public servant, and he will be greatly missed. Greg's family is in our prayers, and Mary and I extend our deepest sympathies to them."

Sen. Jeff Clemens, D-Lake Worth
“Sen. Greg Evers was one of a kind. We disagreed on all kinds of things, and he was my friend. Rest In Peace.”

Sen. George Gainer, R-Panama City
“Senator Greg Evers was a dedicated public servant and an even better friend. He will be greatly missed. Go rest high on that mountain.”

Rep. Jay Trumbull, R-Panama City
“Today our state mourns the loss of a true champion of NW Florida, Senator Greg Evers. Brittany & I send our prayers to the Evers family.”

The Senator was a true

Permalink Submitted by Thomas DeRita on August 24, 2017 - 8:28am
The Senator was a true Gentleman, always cared about issues to make Florida a better place to live.

Senator Evers was a good and

Permalink Submitted by Gregory E. Johnson on August 24, 2017 - 7:05am
Senator Evers was a good and decent public servant always meeting you with a smile.

He tried to hold the Florida

Permalink Submitted by Susan Chandler on August 24, 2017 - 3:01am
He tried to hold the Florida Department of Corrections accountable ... may he rest in peace.