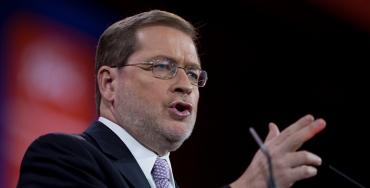 Towards the end of last week, Norquist, the president of Americans for Tax Reform, announced his support for U.S. Rep. Neal Dunn’s, R-Fla., “Refund Rights for Taxpayers Act.” Pointing to a problem a constituent in his North Florida distract has had with the Internal Revenue Service (IRS), Dunn’s proposal would give taxpayers seven years instead of the current three to claim overpaid taxes. Under Dunn’s legislation, the IRS’ window to collect back taxes would shrink down from ten years to seven.

“The IRS works for taxpayers, not the other way around,” Dunn said when he showcased his proposal on Thursday. “This bill is based on the simple principle that taxpayers should be able to collect from the IRS for at least as long as the IRS can collect from them. The Refund Rights for Taxpayers Act rectifies the unfairness in current law. And like many other good legislative ideas, it comes from the frustrations and concerns expressed by hardworking taxpayers at home.”

Dunn noted that the IRS is currently sitting on more than $1 billion from over a million Americans.

“With one billion dollars worth of refunds at stake, American taxpayers deserve to have their refund rights protected against the IRS,” Dunn said.

“I write in support of the ‘the Refund Rights for Taxpayers Act, legislation that ensures taxpayers and the IRS have the same amount of time to correct any mistake that resulted in the payment of either too much or too few in taxes,” Norquist wrote in support of Dunn’s proposal. “This legislation is a simple, yet important solution that ensures taxpayers and the IRS are held to the same standard.”

Permalink Submitted by Andrew Nappi on July 17, 2017 - 8:00am
Rep. Dunn, begin calling for and organizing for the repeal of the 16th Amendment and make freedom legal again.

Permalink Submitted by Andrew Nappi on July 17, 2017 - 7:52am
Perhaps any incremental gain for the citizen serf against the IRS is better than nothing, but this legislation shows the weakness of Rep. Dunn's understanding and commitment to real liberty. While a federal income tax has some aspect of legality with the cloudy passage of the amendment allowing it; it is an abomination and offense to the founders of our Independence in 1776 and to the framers and ratifiers of our Constitution. What manner of people allow the fruits of their labors to be seized weekly from their paycheck before they receive it? Is this seizure the mark of an alleged free people's government? Of course not. After a century, we are all conditioned to accept this thievery. In the process, the IRS has become the most dangerous and vicious domestic terrorism organization in our history. Rep. Dunn and his colleagues should be looking to abolish the IRS while promoting these tiny protections. If Rep. Dunn believes "the IRS works for the American people" he is delusional. They prey upon the American people and as long as he and his colleagues treat this organization as if it has some moral standing to exist, the people he works for will continue their existence as wage serfs to the IRS. Congress has the power to defund this tyrannical agency if it hasn't the gumption to abolish it. Rep. Dunn is playing defense with the IRS when the only winning strategy for the people via our representatives in "The People's House" is an unrelenting and merciless offense. You know, the type the IRS uses against us.