The controversial Florida Supreme Court and civil courts in South Florida find themselves dubiously honored in fourth position on the American Tort Reform Foundation's 2016-2017 list of "Judicial Hellholes" -- putting them among the nation's most unfair courts in the handling of civil litigation.

In fact, the Florida Supreme Court, all on its own, was ranked fourth in last year's ATR report, too -- for the torrent of liability-expanding decisions it issued, many over vigorous dissents.

According to the annual ATR list and report, issued with little fanfare last week, the only judicial hellholes ranked worse than the Florida Supreme Court and South Florida civil courts are 1) St. Louis, Mo., a magnet for product liability lawsuits and consumer class actions; 2) California, a haven for personal injury attorneys "seeking riches at the expense of employers, consumers and taxpayers"; and 3), New York City asbestos litigation, in which defendants now face the reintroduction of punitive damages long sought by plaintiffs’ lawyers.

The report's executive summary points to the Florida Supreme Court's long and continued record of "liability-expanding rulings and decisions that rewrite and invalidate laws that do not fit the policy preferences of a majority of the court’s members." This year’s decisions increase workers’ compensation costs and subject to new liability employers, state agencies and even those who call police for help. South Florida, in particular, is known for its aggressive personal injury and consumer litigation bar, and troubling alliances between lawyers, shady medical clinics and service providers that run up expenses for lawsuits, says the summary. 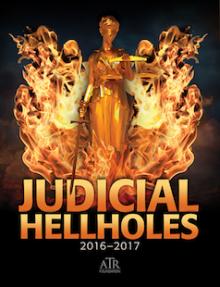 American Tort Reform Association President Tiger Joyce, in his explanation of the report, said, “With both this annual report and a year-round website, our Judicial Hellholes program since 2002 has documented troubling developments in jurisdictions where civil court judges systematically apply laws and court procedures in an unfair and unbalanced manner, generally to the disadvantage of defendants.

“Florida’s Supreme Court and civil courts in South Florida, where judges seem to favor an aggressive plaintiffs’ bar, have been frequently mentioned in our report, and this year is no different,” Joyce continued.

“The Sunshine State’s high court in 2016 continued its liability-expanding ways, rewriting and invalidating laws duly enacted by the Legislature and governor, such as a thoughtful reform intended to contain workers’ compensation costs.  Meanwhile, in South Florida, dubious consumer protection lawsuits are on the rise, primarily benefiting the lawyers who gin them up, and alliances among personal injury lawyers, shady medical clinics, and various service providers target insurance companies and drive up premiums for everyone."

The report details in particular the latest expansions of liability by the Florida Supreme Court.

As explained in last year's report, the Supremes preserved a plaintiff-friendly test for product liability claims that most other courts have abandoned, imposed liability on a landlord for an unsolved double murder, and allowed plaintiffs in personal injury cases to recover damages for future medical costs that would be picked up by taxpayers through Medicare. "Its decisions," says the report, "are just as bad or worse in 2016."

Workers’ Compensation. The report takes Florida's high court apart for two recent decisions that are causing workers’ compensation insurance rates to skyrocket, with small businesses and other employers facing what could end up a 35 percent hike.

"Is it any wonder," asks the report's author, "that workers’ compensation costs are projected to rise dramatically when a temporary injury can result in five years of payments and attorneys can receive huge fees in small disputes? And in such an environment, can anyone be surprised that a plaintiffs’ lawyer, presumably with his eye on a new yacht or vacation home, had the nerve to file a lawsuit seeking to prevent the state Office of Insurance Regulation from conducting a public hearing into these rising costs?"

Call 911! Then Pay $3.3 Million. Apparently, “if you see something, say something” has been replaced in Florida with “think twice, and maybe three times, before calling police for help.”

The report tells the story of a Florida Supreme Court ruling in June, after a bank faced liability when a teller, mistakenly believing that a customer fit the description of a suspected robber depicted in an e-mail disseminated that morning, triggered a silent alarm.

Although the teller made an honest mistake, the court found that Bank of America could be held responsible for injuries resulting from the police response. A Miami-Dade County trial court awarded the plaintiff $2.6 million in compensatory damages, primarily for pain and suffering, plus an additional $700,000 in punitive damages. A mid-level appellate court rationally threw out the preposterous award, applying the longstanding rule that a person who contacts law enforcement in good faith to report criminal activity cannot be liable for negligence.

But the usual 5-2 majority on the high court reversed that appellate decision and sent the case back for a new trial.

The report was written before Gov. Rick Scott appointed conservative Judge C. Alan Lawson to replace liberal Justice James E.C. Perry on the Florida Supreme Court. Though Lawson's presence on the bench would not have changed the ruling in this particular case, on another day, reformers hope, his argument might have an impact on the decision.

More Fuel for Tobacco Lawsuits. "Florida’s storied tobacco litigation shows no signs of burning down after 2016’s back-to-back Florida Supreme Court rulings expanding liability," says the report. Since the state high court lowered evidentiary requirements in tobacco lawsuits a decade ago in Engle v. Liggett, state courts have been working their way through thousands of trials. In March 2016, the Florida Supreme Court made it easier to recover punitive damage awards. Then it lowered the bar for individuals to be included in the class that is entitled to special advantages when suing tobacco companies.

There is a great deal more to this report.

And while the state Supreme Court might be moving closer to real balance with Lawson replacing Perry, the Legislature could be headed in the other direction.

A statewide report released two months ago from Sick of Lawsuits Florida (SOL), took a deep look at just how much trial lawyers are spending to keep Florida a lawsuit-creating haven.

The report found that Florida trial lawyers spent $6.2 million on state political contributions this election cycle, totaling $1.1 million to individual state candidates, $1.6 million to state-party committees, and $3.5 million to Super-PACs and other outside groups.

Over the past two legislative sessions there were several legal reform bills before the Florida Legislature.

"Each of these bills was a smart, commonsense reform that would have significantly improved Florida’s legal environment," wrote Land O' Lakes restaurant owner Bennett Pumo in a Nov. 4 column in Sunshine State News. "But none of the bills even managed to make it out of committee. With this track record, it’s no wonder half of small business owners in the state think that nothing is being done to enact legal reform."

The 30-year-old American Tort Reform Association is the only national organization exclusively dedicated to reforming the civil justice system. With a nationwide network of state-based liability reform coalitions backed by 135,000 grassroots supporters, it claims "an unparalleled track record of legislative success."

Floridians Mostly Feeling Optimistic Heading into the Age of Trump

Nothing can be more evident

Permalink Submitted by Howard Cantrell on December 21, 2016 - 9:31am
Nothing can be more evident than a recent Summary Judgment decision by Judge John Duryea of the 20th Judicial Circuit in case No. 15-CA-001568 against a local religious community of a SLAPP litigation by the attorneys of Henderson, Franklin, Starnes & Holt, P.A., the largest locally based, full-service regional firm with 55 attorneys who overwhelmingly finance judge Duryea's election.

Permalink Submitted by DAL on December 27, 2016 - 5:18pm
Agreed. The 20th Judicial Circuit of Lee County appears to be is a backwater of good ol boys such as Henderson Franklin.

Permalink Submitted by Robert Warner on December 21, 2016 - 6:21am
Nothing like shutting down real access to the courts by claiming responsible dissents cause too much trouble.. Who needs dissenting opinions in today's world, anyway - especially if one is a mouthpiece for the insurance industry.

Your article is totally one

Permalink Submitted by Tom M. on December 20, 2016 - 8:24pm
Your article is totally one-sided and biased toward insurance companies and other business interests. The individual should be able to fairly prosecute a case for damages. Your article's viewpoint would eliminate our constitutional right to a trial by a jury of our peers.

Its the John Morgan world we

Permalink Submitted by LLM on December 20, 2016 - 11:50am
Its the John Morgan world we live in. Businesses are sued for the most ridiculous reasons, personal responsibility is tossed out the door and the courts have become this ridiculous activist group intent on redistributing wealth. These decisions are a disgrace to the state and federal constitution. But the PI lawyers run candidates and fund them for judgeship and own the county courts systems, many of the circuits, and the FSC 4-3 now. The entire judiciary seems to be controlled by the Bar and the Florida Justice Association. And the legislature, under the direction of 2 ambulance chasers, and with ambulance chasers now in charge of various committees, will never pass these bills bringing sanity for the job creators out there. It will never happen. I would be remiss if I did not add that the PI bar has been brilliant in the way it funnels lucrative cases to powerful sitting members of the Legislature, even going to far as to adding them to the PI practice of law firms. Someone should file a Bar complaint - Oh that's right. The PI lawyers control that organization as well.

Permalink Submitted by DAL on December 27, 2016 - 5:14pm
John Morgan notwithstanding, everything you state is simply false. The judiciary is the ONLY branch of government NOT controlled by special interests and money. An independent judiciary, beholden to none, is the last bastion of justice in this country. Your assertions that PI lawyers control the Bar and the Judiciary is ludicrous; The insurance industry and organizations such as the US Chamber of Commerce have far far more insidious influence on those organizations . You obviously have an agenda to promote.

You are right. 4 recent

Permalink Submitted by John Wells on December 21, 2016 - 9:18am
You are right. 4 recent complaints against attorneys in Fort Myers and Cape Coral Florida for unethical, unlawful, and unprofessional acts were rubber stamped rejected without any investigations by the Florida Bar. What's the sense in filing a complaint for wrongdoing when the Bar is the attorney for the accused.

The alternative is carte

Permalink Submitted by Protecting the ... on December 20, 2016 - 9:33am
The alternative is carte Blanche for the dirty insurance companies. Victims need the money more than billionaires.